The bridal and ceremony three-day fair closed on June 27 in Milan and included a number of fashion shows by Blumarine Sposa and Elisabetta Polignano. among others. Despite a reduced area and a smaller number of visitors due to travel bans and restrictions, organizers and exhibitors agreed that this trade show signaled “the beginning of a new path not only for Fiera Milano fairs, but for all in-person shows,” underscored Emanuele Guido, exhibition director business unit lifestyle at Fiera Milano.

Guido said brands, presenting collections for 2022, “showed an urgent need to take stock of the situation and plan the months ahead,” opting for an IRL experience. Most of the weddings in Italy have been canceled or postponed for months, impacting the entire supply chain as well. According to Guido, the previous collections were therefore left on stand-by, then mixed with new ones and companies needed to show those changes to a wider range of buyers and press and give them a message of strength and clarity beyond creativity.

Getting ready for a new start could not do without the awareness of the changes brought by the pandemic. With regard to the bridal sector, Guido explained how Fiera Milano studied emerging trends through focus groups with the companies involved, including a Generation Z study, which polled young women between 14 and 22 years old. “According to our research, the majority of them dream of a traditional wedding” explained Guido, “and are eager to be dressed in a white, minimal dress.”

All the Looks at the 2021 Cannes Film Festival

Although technology has permeated the daily lives of members of Generation Z since birth, young women still believe that a wedding dress is deeply tied to a customer experience. Choosing the right designer and the right dress are just the first steps, but trying the dress on and seeing it take life together with their mothers and friends is something young women do not want to give up, continued Guido.

Nicole Cavallo, who designs Nicole Milano, part of the Pronovias Group, the daughter of designer Alessandra Rinaudo and Pronovias manager Carlo Cavallo, decided she would work in the family company after obtaining a degree in marketing. “I wanted to interpret the needs of Millennial women like myself and provide my own personal touch to the collections approaching fashion [trends],” said Nicole Cavallo.

Romance is in Nicole Milano’s DNA: chantilly lace and guipure filigree, organza and transparencies, sleek gowns in crinoline on the one hand, minimal silhouettes in Mikado on the other hand. “My target bride is a very young one, as we are witnessing a decrease in the average age of our customers, which is now around 22 years old,” underscored Cavallo, confirming that the company’s clients “believe in the emotions and the experience that a bridal atelier can provide them.”

Accordingly, Nicole Milano is investing in new boutiques, such as the latest unit that opened in Paris last May. The group counts 4,000 stores in more than 100 countries and is aiming to boost its international expansion. Even if Italy and Spain remain its main markets, it is eyeing the U.S. and Asia, and China in particular.

Cavallo’s mother Rinaudo is chief artistic director of Pronovias Group, which counts six brands: Pronovias, Nicole Milano, House of St. Patrick, White One and Ladybird. In April, the group announced a partnership with Vera Wang to launch a new affordable bridal brand. The group decided to participate at Sì Sposaitalia Collezioni with all of its brands: “We wanted to give the message that the bridal system is stronger together, that it has been resilient and it’s now looking to a better 2022,” Rinaudo said.

Following the new needs of customers, Rinaudo explained how important it is for the company to promote a more eco-friendly approach to the production, confirming what ceo Amandine Ohayon said ahead of the opening of Sì Sposaitalia Collezioni. “It is a long-term effort which starts from a reduced use of plastic in our offices and in our packaging and goes on with sustainable collections, including the use of recycled materials,” Rinaudo underscored.

Elisabetta Polignano’s collections were also tuned in to sustainability. Eco-friendly materials like linen and hemp, jute and recycled plastic are all pieces of an ethical message: “My collection for 2022 could not but recount the tragic period we have experienced and from which we are — perhaps — emerging,” said Polignano. “It tells it, though, from a positive and energetic perspective: I have called the collection ‘Metamorfosi’, choosing this term for its sense of rebirth.” 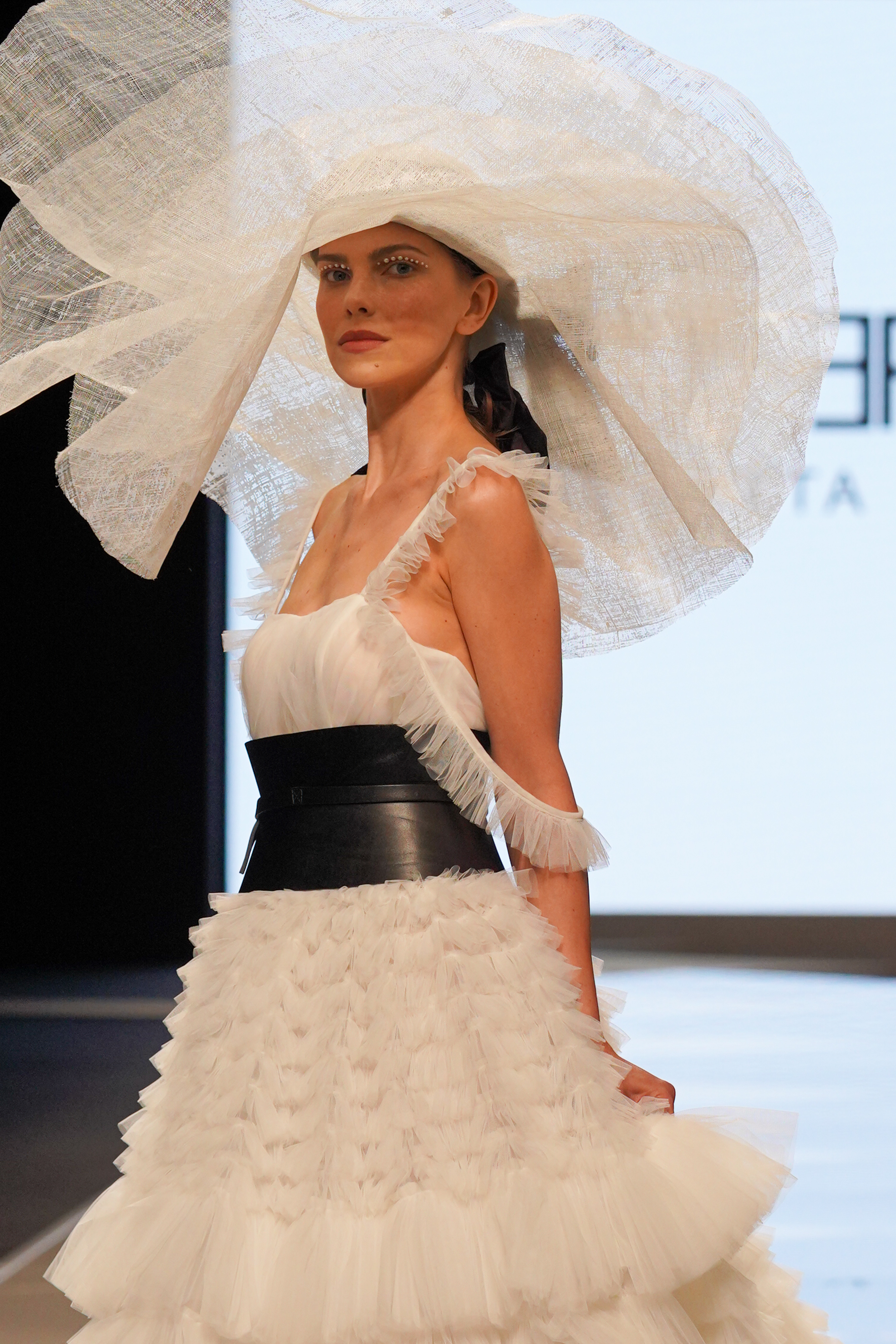 Long romantic white gowns lit up the collections, sometimes mixed with black inserts to give a rock spirit to volumes and embroidered details. Tartan touches were reminiscent of swinging London, while recycled plastic biker jackets and maxiskirts give a bolder message of innovation and sustainability.

The company, which was founded near Novara, Italy in 1990, is banking on this green path to boost its business abroad. Polignano’s exports represent 40 percent of its turnover and is driven by the U.S. and Asia. “Our business plan has the goal of implementing the U.S. and the Japanese markets throughout our local distribution,” said Dario Mongioi, owner and general manager. “At the beginning of September we are also launching Elisabetta Polignano Italy Tour, bringing our bridal art to buyers and to brides — and we do hope to do the same in the United States as well,” Mongioi added.

An installation by Antonio Riva Milano was a standout. Antonio Riva, who founded his haute couture house in 1994, presented one of his bolder Hillary collection pieces in an Irving Penn-inspired setting, created with photographer Fabrizio Ferri: wooden trunks suggested that precious dresses were well stored within and treated as works of art. The dress presented at the fair plays on three-dimension, provided by the contrast between milk white Mikado waves and black slates, which amplified the volumes. 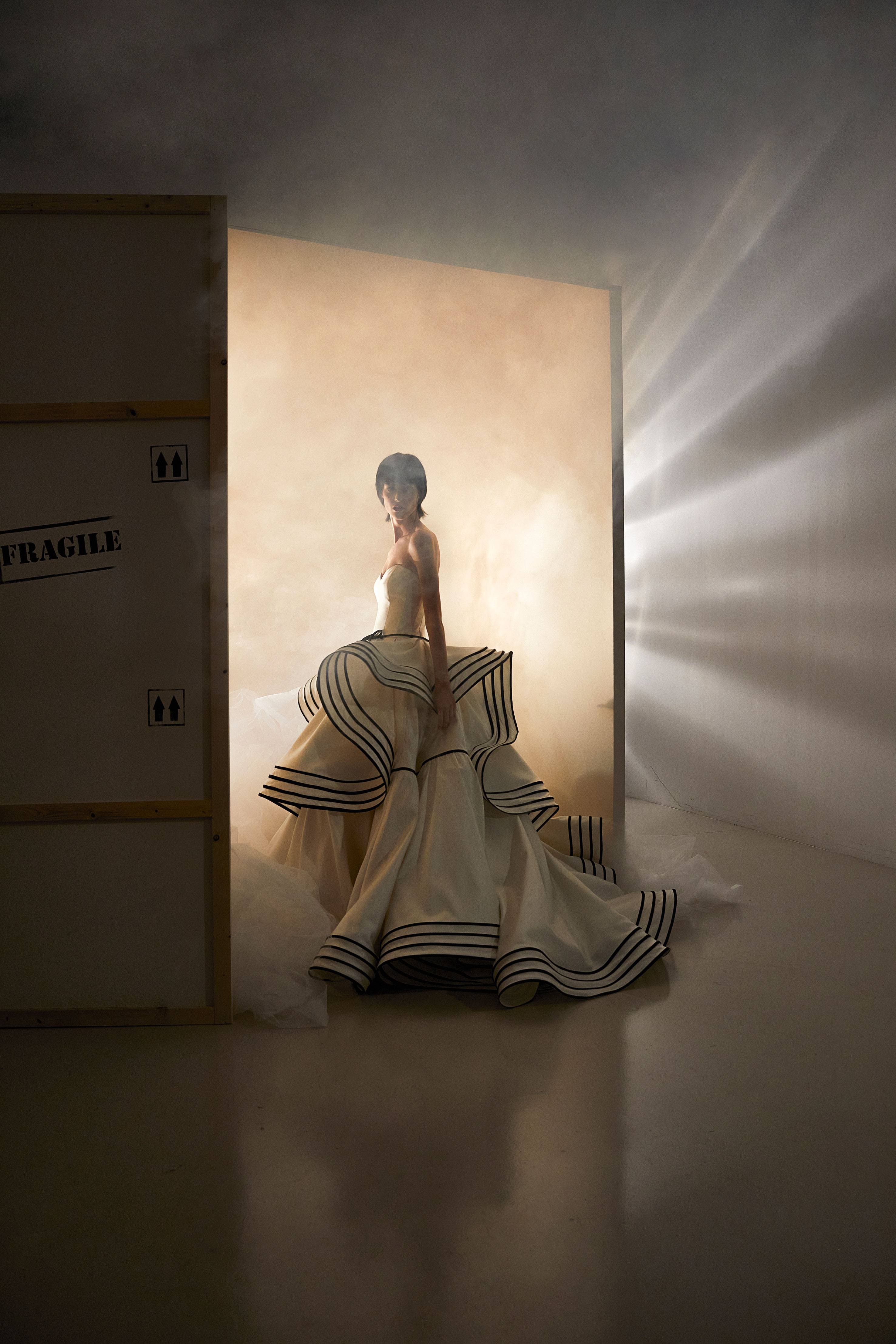 The pandemic has spurred Maison Signore to meet the new customers’ expectations. “Last year was difficult for everybody, but the market is showing signs of recovery,” explained Luigi Signore, who helms the family business based in Caserta, Italy. “Last year’s pending orders have been unlocked and recently approved and our seamstresses are now working very hard, which is a good sign of economic recovery, in our opinion.”

Italy accounts for 60 percent of sales, and 2,500 orders come from the Caserta region alone, Campania, in the South of Italy. The U.S., Japan and South Korea are the most important foreign markets and Russia is the next most promising one. The U.S. in particular “represents our only market that has never seen a total stop last year,” Signore underscored.

As a result of the most recent travel bans, the company launched a mini collection, precisely to scale: a selection of masterpiece dresses created in mini versions that has traveled from the U.S. to Japan. “We are now thinking of creating these tiny versions of every year’s bestselling dresses and gathering them in a sort of museum,” Signore added. “Tiny Dress by Sì Sposaitalia Collezioni in partnership with Maison Signore” was staged at the fair. 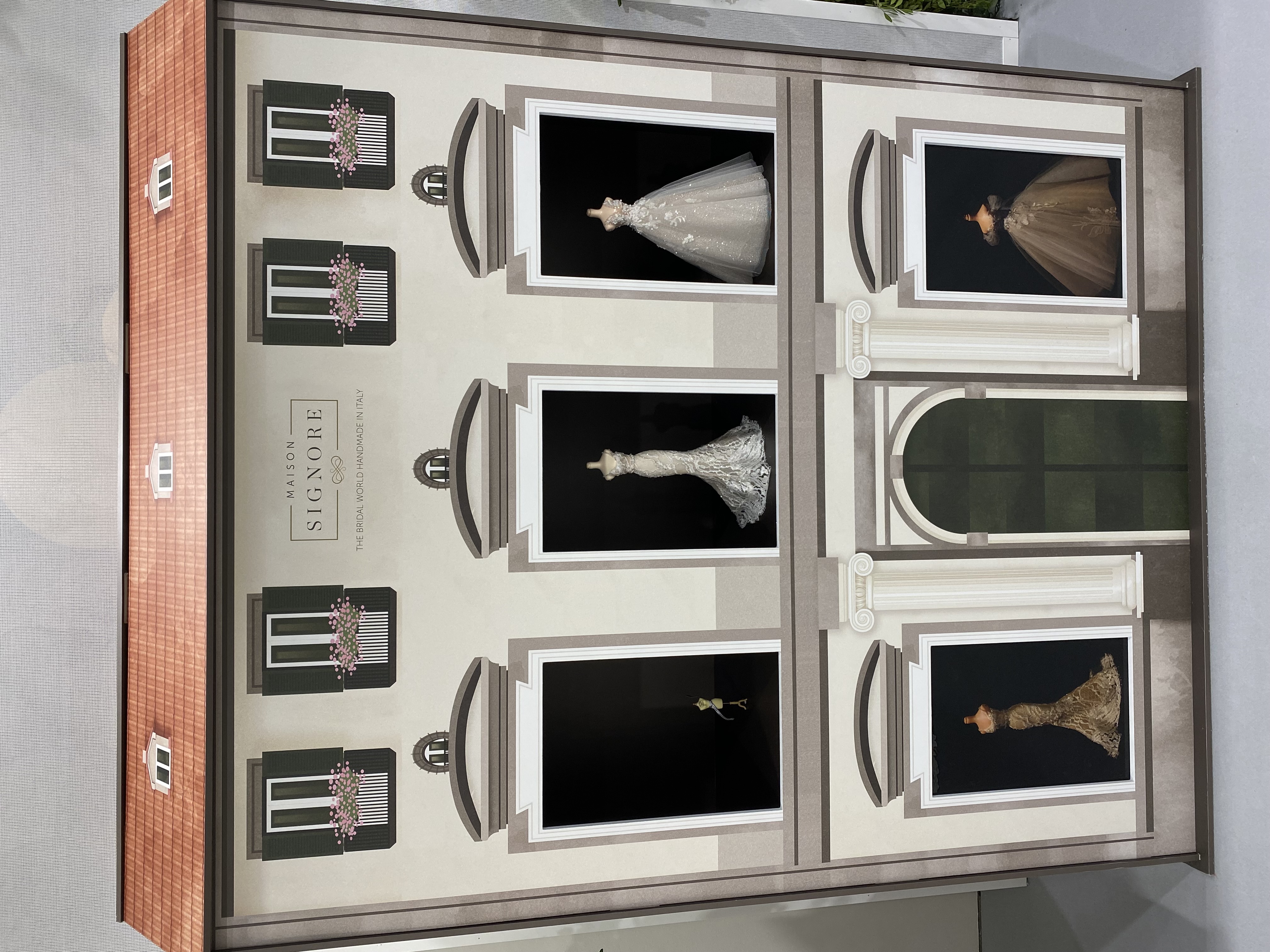 The pandemic has spurred MG Arcione to provide a wide range of special occasion designs — a key factor that has allowed the company to “maintain market shares in Europe, Italy and Spain above all, while opening or strengthening a path in Asia and the Middle East,” said Gianluca Arcione, who runs the company with his sister Marika. Founded by the Arcione family in France nearly 200 years ago, the company was established in Naples when the family moved to Italy.

MG Arcione offers total looks, including accessories like hats, gloves and precious embroidered flowers, as well as men’s suits and designs fit for religious events such as the First Communion.

France-based Selestia Paris presented its three brands Selestia Paris, SiBelle Couture and Claudia at Sì Sposaitalia Collezioni. Serghei Gaiseniuc, who runs the business with his wife Oksana, explained how important it was for them to attend an IRL trade show, after a very difficult year. “During this three-day fair we have closed promising orders in Italy, Spain and the United States,” he said. For the first time, the company will not only sell Selestia Paris, its higher-range collection, but also the other two brands in Italy.

The company will debut in Chicago with Selestia Paris at the National Bridal Market in August. “We are now studying an offer for the American market which will combine classic silhouettes with a more sensual design,” he explained.