On the crowded calendar of runway shows from Milan to Mumbai, Melbourne Fashion Week has struggled like a teenager to find a look that sticks. While Melbourne Fashion Festival, held in March, has blazed trails with its pioneering approach to inclusive beauty and sustainability and Australian Fashion Week in Sydney attracts international attention, MFW has played catch up over the years, but may leapfrog ahead of the pack by returning to its retail roots on Monday.

“This is a people’s event. It’s about runway to retail,” said Sally Capp, Lord Mayor of Melbourne, spokesperson for the event that is operated by Melbourne City Council. “We are hoping for a bump up in the CBD. Normally, we are the lead in to the Spring Racing Carnival with its finery. By moving the dates we are making sure that people can physically go and enjoy a full-on retail fashion experience.” 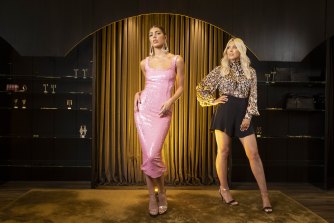 The event, which started life as Melbourne Spring Fashion Week 27 years ago, would usually usher in new season styles but has been pushed back to avoid a repeat of last year’s predominantly digital activation, despite bringing it closer to the Black Friday sales period. As a result of the calendar shake-up designers are being encouraged to showcase timeless pieces rather than current collections.

“Our city has been shut down and behind closed doors people have been working frenetically to prepare for the bounceback,” Capp said. “We have so much pent-up demand and energy and interest. Fashion goes to the DNA of Melbourne. We almost can’t have enough fashion at the moment.”

Organisers have added further energy by shifting the runways to COVID-19 friendly locations, such as the MCG underground car park, the Sea Life Aquarium, the Plaza Ballroom beneath the Regent Theatre and the National Gallery of Victoria. Respected Melbourne stylists Carlos Mangubat and Abby Bennett will be joined backstage by gender activist and former Cosmopolitan fashion director Deni Todorovic for the ticketed events.

Designer Dimitria Papafotiou will show her label Diida at a free show on the Seafarers Bridge at Docklands, alongside Aje, Rebecca Vallance and Veronika Maine. 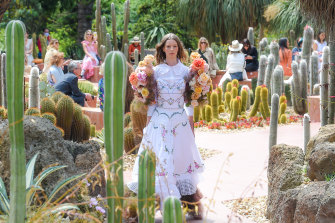 “Having the festival gets me excited,” Papafotiou said. “It makes me feel like things are happening and puts a bit of fire into what I do. I’m a Melbourne designer who makes their clothes in Melbourne and that should be celebrated.”

“We have taken a bit of a hit in the fashion industry, and we really need designers to get out there. That’s what I’m showcasing. This is not the time to play it safe. I’m going big and glam.”

Diida’s landlords at the Emporium shopping centre are hopeful that the buzz of runway shows on the city’s outskirts will translate into foot traffic that goes beyond window shopping. The centre will host capsule pop-ups throughout the festival. “Encouraging shoppers to return to shopping malls and physical retail stores; bringing people back into our CBD is now our number one focus,” said Kate Rooney, centre manager, Emporium.

“The only thing we should be thinking about is getting people shopping again. We need people to feel excited about returning to stores and the shopping experience that you can’t have online,” Hush said.

When Melbourne Fashion Week wraps up on November 21 and the urgent need for retail re-invigoration hopefully subsides, the founding director of the Melbourne Fashion Festival and consultant Robert Buckingham thinks it’s time for the industry to assess the purpose of fashion weeks and festivals.

“COVID-19 has shown that the business model for everything needs a radical rethink. This applies to cities, workplaces, tourism and fashion events. It’s a matter of quality not numbers. If you do anything, it needs to be extraordinary, and it must be meaningful for the industry and the public. I don’t think more runway shows are the answer.”