Kim Jones, the British designer, is many things.

He is among the most celebrated men’s wear talents of his generation. He is a five-time winner of various British fashion awards, for men’s wear designer of the year, Trailblazer and Creativity, and he has received the Order of the British Empire. He is the former head of his own label, as well as Dunhill and Louis Vuitton men’s wear, and is the current head of Dior men’s wear. (He is the guy who got Vuitton to collaborate with Supreme, and Dior with Air Jordan.)

He is BFF with Kate Moss. He is a collector of rare books (about 20,000), rare vintage clubbing wear (early pieces from Vivienne Westwood and Leigh Bowery) and rare vinyl (around 6,000 records). He is a peripatetic child of Europe, Africa and the Caribbean. He is all that.

What he has not been, however, is a women’s wear designer. He did not study women’s wear at Central Saint Martins, and, at 41, has never made a full women’s collection.

Yet last September, the executives at LVMH named Mr. Jones the artistic director of women’s wear for Fendi, the position held for 54 years by Karl Lagerfeld, the most prolific, provocative and omnivorously cultured designer of the 20th and early 21st century, one of the few who transcended fashion to become practically a piece of pop art unto himself. 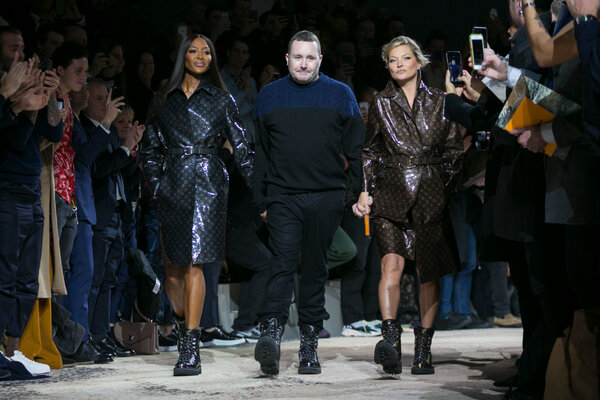 What were they thinking? This week, as Mr. Jones introduces his debut couture show for Fendi, everyone will find out.

“It’s quite a challenge,” said Antoine Arnault, the LVMH group head of communications and chief executive of Berluti, another LVMH men’s brand, who has known Mr. Jones since they worked together at Vuitton. But, he said, Mr. Jones is “one of our superstars.” Then he used words like “mysterious” and “unexplained drive” before finally settling on a soccer metaphor.

“When you have a top footballer on your team,” Mr. Arnault said, “you want to let him play to to his full potential.”

Mr. Jones is not the first designer to make the jump from men’s to women’s wear — Ralph Lauren, Giorgio Armani, Raf Simons and Hedi Slimane did it before him — but given that Fendi surpassed a billion euros in revenue in 2017 (about $1.2 billion) to become one of the more important brands in the LVMH stable, a lot is riding on his success.

In addition, Mr. Jones remains the artistic director of Dior men’s wear, which means he is not only stepping into Mr. Lagerfeld’s shoes at Fendi, but also, like Mr. Lagerfeld, he will be the only designer at the top of two global luxury heritage brands, responsible for at least 12 collections a year, a balancing act that has long been seen as a handicap to creativity.

Still, said Marios Schwab, who designed a women’s collection in 2003 for Mr. Jones’s namesake label, he has long been “majorly ambitious.” He did, after all, close his own label with very little tsuris after he landed the bigger jobs, swapping independence for the corporate superstructure of power, budgets and reach. As he told British Vogue when he joined Vuitton: “Why would I want to do my own label when I can do fantastic things here and put my spin on things?” Then he added, “You can’t be that naïve about the world, you have to get on with stuff.”

Besides, said Jefferson Hack, a founder of Dazed Media, who has known and chronicled Mr. Jones since college: “Kim’s vision has always been very gender nonspecific. Though he has a strong point of view on the new masculinity, he has also been good at making pieces from his collections appeal to female desire.”

Not that Mr. Jones himself seems particularly worried. Like Mr. Lagerfeld, he has both a healthy sense of his own talent and an equally healthy lack of neuroses about the size of his job.

“I think I’ve achieved quite a few good things in my career, and this is the next step,” he said, speaking from the study of his house in West London a few weeks before the Fendi show, which will not exactly be a humble, finding-his-feet debut. Rather, it will be a go-big-or-go-splat bid with a cast that is to include (still to be confirmed) Demi Moore, Kate and Lila Moss, Bella Hadid, Adwoa Aboah, and Christy and James Turlington posed in different vignettes amid a maze of glass boxes in the Palais Brongniart, the former French stock exchange.

Though Mr. Jones used to have an apartment in Paris, he had given up the lease when he got the Fendi job, to reduce distractions. Instead, he stays in the same room in the same hotel every time he goes to Paris or Rome, kind of the way Mark Zuckerberg wears the same thing every day so he doesn’t have to think about it.

“The biggest honor you can get is to be offered the job Karl Lagerfeld did,” Mr. Jones said. Even if it is also the most dangerous because of the comparisons invited.

As he talked, Mr. Jones was wearing a black Loro Piana vicuña knit he said had been a Christmas present. (The brand is also owned by LVMH.) Over Christmas, his normally brown hair had been dyed platinum blond, and he had lost about 33 pounds during lockdown, thanks to having an indoor pool and being home enough to actually have a routine.

He was sitting in front of a wall of shelves that housed his collection of rare books, including an uncorrected proof of “To Kill a Mockingbird,” a first edition of “Breakfast at Tiffany’s,” original lyrics by the Velvet Underground and nine versions of “Orlando” by Virginia Woolf. Among them was one that Woolf had inscribed to Vita Sackville-West, her lover; one owned by Noël Coward; and another owned by John Maynard Keynes. The positioning was not a coincidence.

Mr. Jones’s couture show was inspired by “Orlando” and the whole Bloomsbury set, who may have hung out in the English countryside but also had a love affair with Rome (which is, of course, where Fendi was founded). He is fully aware that this may seem a hackneyed choice for a debut, given that Bloomsbury is one of the most overused references in fashion, having inspired such designers as John Galliano, Christopher Bailey and Rei Kawakubo, but in stationing himself in front of his books, he was making an implicit argument about his right to the subject. As well as his understanding of his new job.

“Couture,” Mr. Jones said, “is very personal.” It is, after all, about garments made to order, for a single person. “Orlando” was demonstrably very personal to him. Hence couture equals “Orlando.”

It was a classic Jones move and is one of the reasons LVMH has so much faith in him: He sees all the pieces on his board. Also, he is unabashed in his delight in creating “hits” — products that go viral — and in his almost scientific interest in plumbing archives and brand iconography for ideas, an approach that has been termed “commercial biology.”

“I’m a Virgo Virgo,” Mr. Jones said. As it happens, Mr. Lagerfeld’s birthday was the day before Mr. Jones’s birthday. A superstitious person may think this was a telling detail. Mr. Jones prefers to keep it more granular.

“I’ll read about him and think: ‘I did that, I do that,’” Mr. Jones said of Mr. Lagerfeld. “Except I arrive at 9 and leave at 7, and he would come very late and keep everyone waiting all night.”

Though his appointment at Fendi is relatively new — he has officially been there only just over 14 weeks — the move was first mooted a couple of years ago when he started to get antsy at Vuitton, and in men’s wear. Men’s clothing may be a growing sector, but women’s wear remains the glamour side of the business: The shows are bigger, as are the collections, celebrities and budgets.

Rumors had reached a fever pitch that Mr. Jones was going to join Donatella Versace at Versace, to become her heir. Instead, he played his chess pieces like a grandmaster and ended up moving to Dior, with the suggestion, it was rumored, of more to come. Indeed, it was during those earlier negotiations, Mr. Jones said, that Silvia Venturini Fendi (the Fendi family member still involved in the business, and the head of men’s and accessories) broached the idea of him coming to Fendi to work on the women’s line.

“It was on the mind of everyone who decides here as soon as we saw how much work power he had and how much his collections touched the right audience,” Mr. Arnault said. Mr. Jones put an Easter egg of sorts in his final Vuitton men’s collection with guest appearances by Kate Moss and Naomi Campbell in shiny LV trench coats (his female friends had always worn pieces from his men’s collections). And at Dior, he delved into the couture archives to add a touch of feminine opulence to his men’s wear.

As far as Mr. Jones is concerned, it is navigating the multitude of choices in women’s wear that is the biggest learning curve. “All the embroideries and techniques are a little overwhelming,” he said, noting that when he arrived at the Fendi atelier, he had to ask the staff to leave for 10 minutes so he could go through them by himself.

For a reality check he has a group of women around him, including Ms. Moss, who consulted on accessories; the stylist Melanie Ward; the art director Ronnie Cooke Newhouse; and, most of all, Ms. Fendi and her daughter, Delfina.

“We both surround ourselves with people and objects that inspire us, and draw upon our own lives and passions to fuel our creative process,” Ms. Fendi said of Mr. Jones in an email. She added that as with Mr. Lagerfeld: “Kim and I exchange ideas spontaneously via text or chat, as there are no boundaries to our jobs. We see something that might inspire us and share it with the other.”

Though Mr. Jones made his name at Vuitton and Dior in part by his ability to meld the tropes of street wear and the runway and his embrace of collaborations, those who expect him to reprise those skills, but in women’s wear, will be disappointed. There are no haute sneakers or hoodies in the couture, no work from guest artists. Rather, there are Bernini marble prints and elaborate brocade, pearl-speckled chiffon and rose-festooned silks.

The collection is a consciously eclectic mélange of androgyny and reference, including a nod to Mr. Lagerfeld, with a half-suit, half-evening-gown look inspired by a sketch of his from 1993. Also, there are a lot of capes.

You can understand why Mr. Jones might have mantles on the mind. And they do look good on everyone.