Venus Williams is doubling down on her tennis collaborations.

The legendary athlete has partnered with Carbon38, the performance activewear retailer, to today launch the Carbon38 x EleVen by Venus Williams collection. This marks Carbon38’s first tennis capsule and first designer collection with an elite athlete. It is a limited-edition collection for one season.

As reported in May, Williams released her second apparel and footwear collection with tennis brand K-Swiss.

A former number-one in both singles and doubles, the 41-year-old Williams is ranked number 112 in singles by the Women’s Tennis Association. Williams is also chief executive officer of her interior design firm V Starr Interior and owns clothing and footwear brand EleVen by Venus Williams.

The Cape Makes A Return On The Runway

The collection consists of 12 styles, including tanks, sports bras, leggings, shorts, skirts, pants, long- and short-sleeved crops, a tennis dress and a romper, along with a bucket hat and socks. Apparel prices range from $78 to $118, with the bucket hat is $48 and socks are $14. 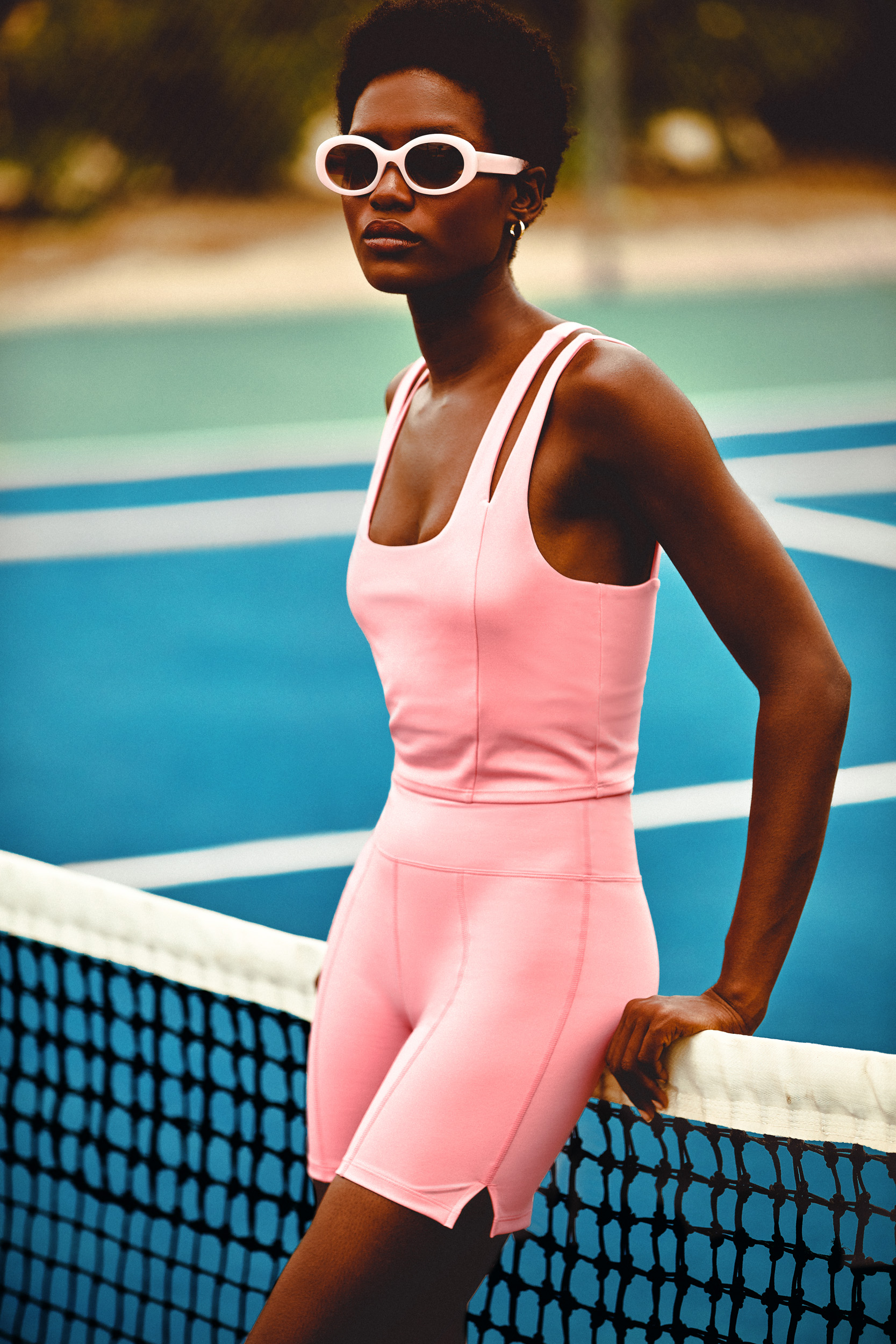 Katie Warner Johnson, who cofounded Carbon38 in 2013, gave several reasons why she wanted to team with Williams.

“She represents so much. The reason I created my business, Carbon38, was to celebrate and support women like her who are bosses, who are constantly striving to be better (which is in her company’s name, always be an 11 not a 10). I followed her career, I’ve grown up with her, we’re about the same age. I’ve just admired her so much as to how she’s evolved as an athlete, and now as a business owner,” said Johnson.

Johnson said she started the business to support female-founded brands. “The fact that I’ve got one of the top athletes in the world who’s also a founder of an athletic brand, it’s kismet,” she said.

Carbon38 has dabbled in tennis over the years. “This is the first time we’ve gotten behind a full tennis story. What’s been super cool during COVID-19 is our activities have changed. We’ve moved out of the studio into the outdoors, and tennis is such a wonderful pastime that so many women, and men, during COVID-19, have picked up. And it doesn’t hurt that the outfits are fashionable,” she said.

As for how this capsule compares to what K-Swiss is doing with Williams’ tennis line, Johnson said, “I think K-Swiss is a fantastic collab. They’re taking their key bestselling styles and Venus is putting her fingerprints on it. And we carry it. What we do at Carbon is we serve our customer, and our customer is boss. We wanted to work together to create a custom-tailored capsule that brings the DNA of both of our brands together and can serve our customer in a new way,” said Johnson.

She said they are doing various tennis skirts, some in a micro-terry, which she called a “fun retro fabric which we haven’t seen since the heyday of Juicy Couture.” They have “to and from” track pants, active looks to wear on the tennis courts and to the gym, and a tie-dyed plaid that shows up throughout the collection.

Johnson anticipates the bestsellers will be the tennis skirts. She said her team and Williams collaborated on the designs, which were manufactured mostly in Asia.

According to Williams, “We tried to think outside the box creatively and give consumers something different from what EleVen has offered in the past by infusing Carbon38’s distinctive style with EleVen’s. This is actually Carbon38’s first tennis capsule so it was a lot of fun collaborating on designing the pieces to reflect both brands’ styles and give their customers a new kind of product that they can rock in their everyday life. The patterns, colors and technology in these pieces are standout, and I believe people are going to be very excited about the variety this collaboration offers. There is really something for everyone.” 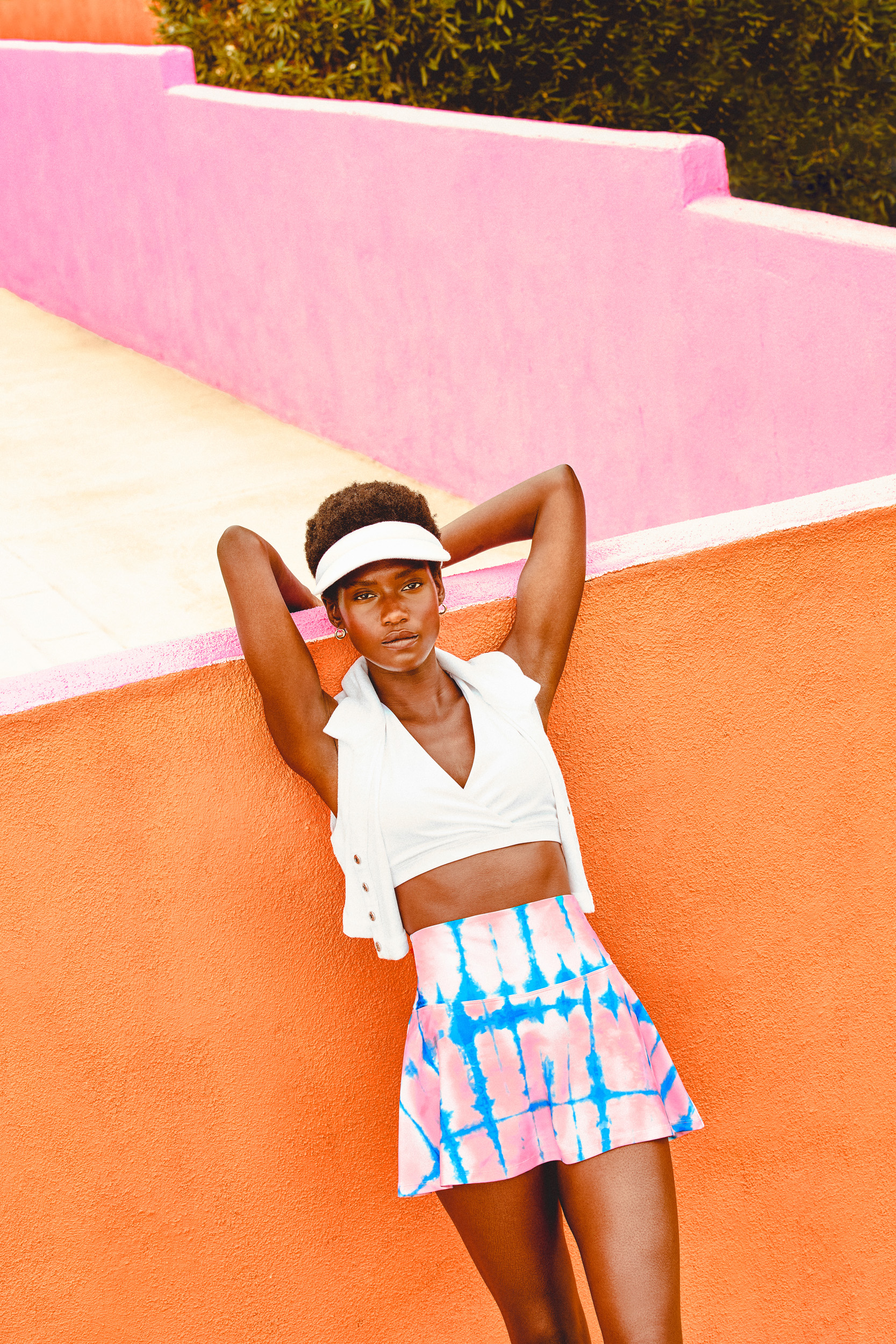 Williams said she took particular care with the details in each piece. “Every item has something that sets it apart, whether it’s a bold pop of peony pink or sky aqua, a racerback cross, a halter top, or an unexpected pant slit,” said Williams. “There are some amazing, transitional items for the court, but the line is equally balanced with every day activewear, too.”

She also noted that they used a cloud compression fabric, which she called “ultra-soft, moisture-wicking and sustainable.” It’s made from recycled water bottles. “This material is perfect for low- to high-impact workouts, not to mention the ultimate squat-proof legging,” said Williams.

Asked what the experience was like working with Carbon38, Williams said, “Collaborating with the Carbon38 team was a dream. As I said before, our teams were aligned on the end goal which made designing the collection so seamless. We knew we wanted to give consumers something versatile and functional, but also fashion-forward, and we are so proud of the end result.

“Tennis is having such a moment right now as more and more people are taking their workouts outdoors, and I think consumers are going to be thrilled with what we are bringing to the table,” added Williams.

In addition to designing all the tennis necessities, such as skirts, tops, dresses and sports bras, Williams said performance, comfort and durability were top of mind. “We took great care with the materials used in this line. The tight fit and mid-weight of cloud compression fabric holds you in and offers incredible support for a range of workouts in any climate. Beyond just that, the moisture-wicking quality pulls sweat away from your body so it evaporates quickly which is a huge plus when you’re on the court,” said Williams. “I typically train in Florida so being able to keep cool is super important to me. I always play my best when I feel confident and when my clothes move with me, so those qualities were also crucial when designing the line. We want women to feel their best so they can perform their best and this line will do just that.”

Discussing how Carbon38 did during the pandemic, Johnson said, “It was wild, in those first couple of months when everyone was locking down, we saw numbers like we have never seen before, which was super exciting. What was really fun was seeing brights picked up in a way I’ve never see in the seven years I’ve been running the company. Being able to sit at your desk on Zoom and see fabulous neon or pink tie-dyed leggings was what our customer was hungry for. That’s the power of fashion. Fashion can change a mood, even in small ways,” she said.

Explaining how she and Williams got together, Johnson said her chief merchant knew some of Williams’ team members and said they should all get together for lunch. “Midway through the pandemic, Venus and I had lunch and hit it off. I adore her. She’s so elegant and brilliant and accomplished,” said Johnson. 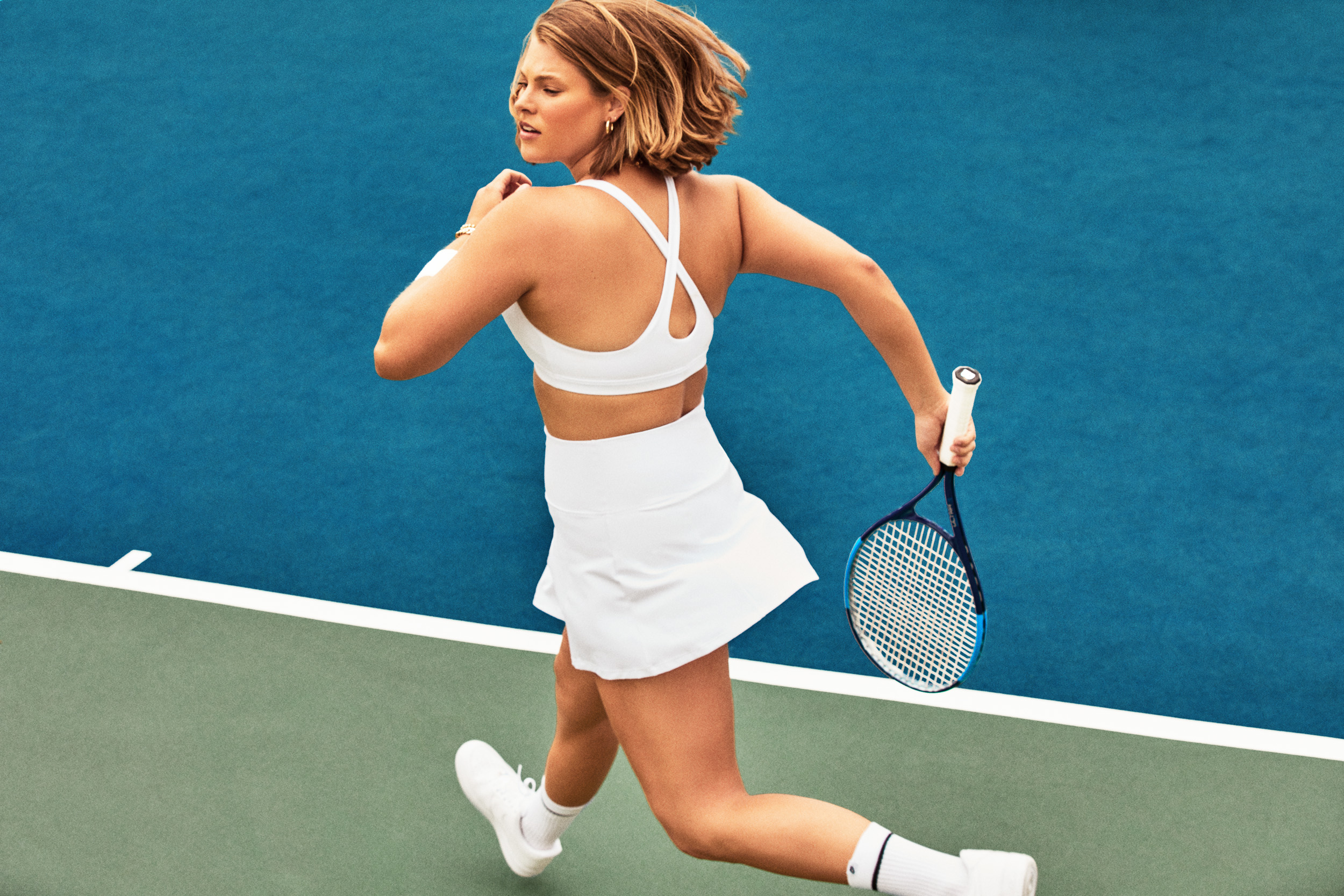 One of the campaign images for Carbon38 x EleVen by Venus Williams capsule. courtesy shot.

Had Johnson seen growing demand for tennis apparel from her customers?

“Honestly, the initial impetus was just around Venus and bringing forth product authentic to her. There’s been this groundswell of tennis over the past year. The real driver of our partnership is I wanted to work with an entrepreneur like Venus,” she said. 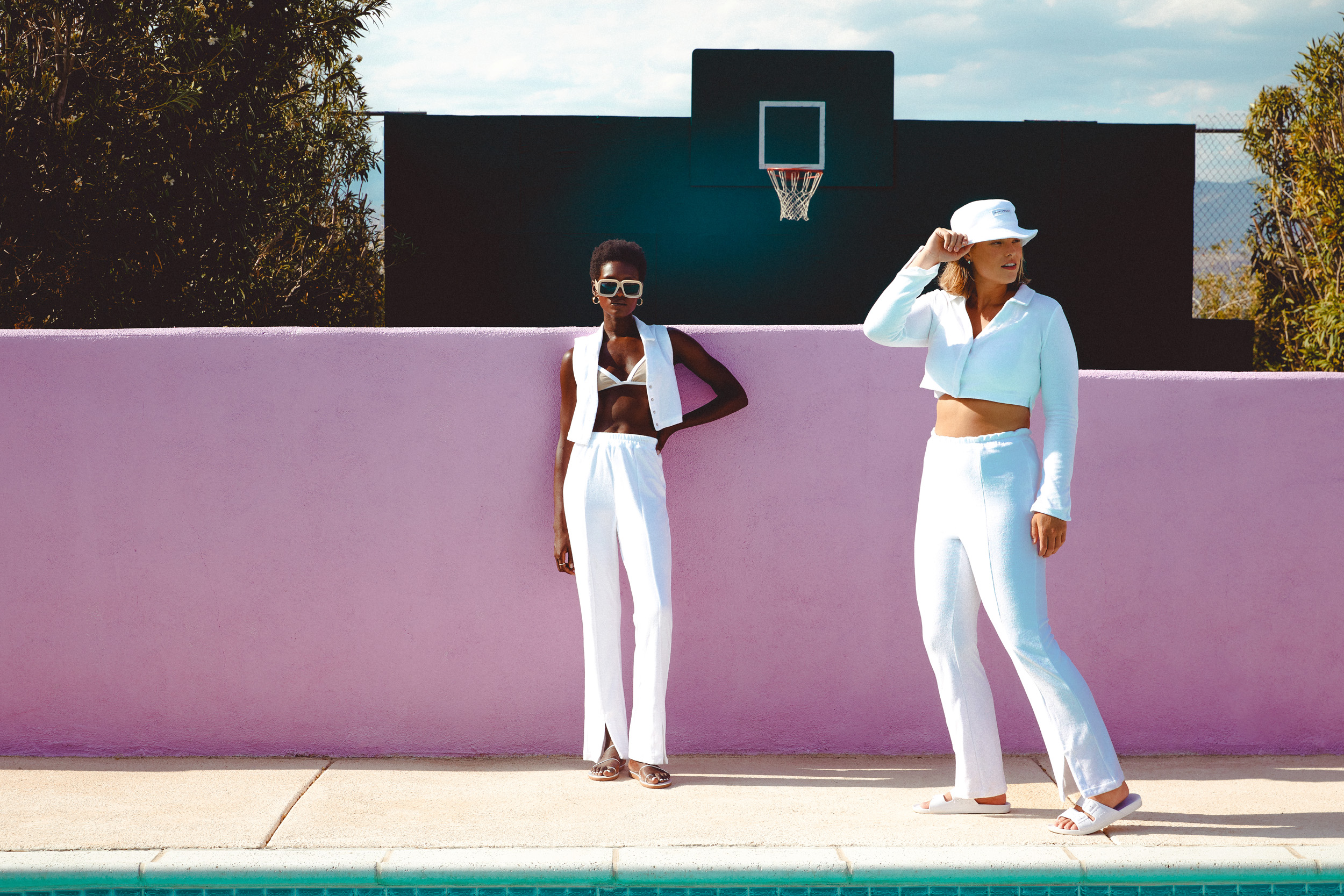 Venus Williams on Being Bolder, Tennis — and Her Second K-Swiss Capsule