PARIS — Tailoring or trackpants? It’s a choice facing many men as they trickle back to the office after a year of lockdowns. Fashion has largely responded by staking out a middle ground of slouchy suiting and elevated sportswear — but Virgil Abloh believes you can have it both ways.

His spring Louis Vuitton men’s wear collection, due to be unveiled online today at 2.30 p.m. CET, toggles between a new, feminized version of formal dressing and rave gear.

“I always work in polar opposites and I’m always dialoguing with the formality of Louis Vuitton and the contemporariness of youth culture today — almost like a generation discovering luxury again, and I’m the conduit,” the designer told WWD during a break from shooting his collection film at a movie studio north of Paris.

“So these polar opposites are the suit and the tracksuit. I was thinking about that: the day job and the night job, the raver and the businessman,” he continued. “I’m not choosing between one or the other. My signature is both.”

This being Abloh, the collection is a multilayered affair incorporating a host of guest stars and collaborations, warranting 53 pages of show notes that included a multiple choice test, for anyone considering a Ph.D. in Abloh-ology. Rumors of a surprise announcement on the day of the show added a frisson of excitement on set.

In addition to appearing on the soundtrack — the opening song is a new Goldie track called “Dassai Menace” — they play characters in a storyline that melds references to martial arts and chess. “It’s based on ‘Lone Wolf and Cub,’ which is a classic Japanese kung fu film that is about a father protecting his son,” said Abloh. 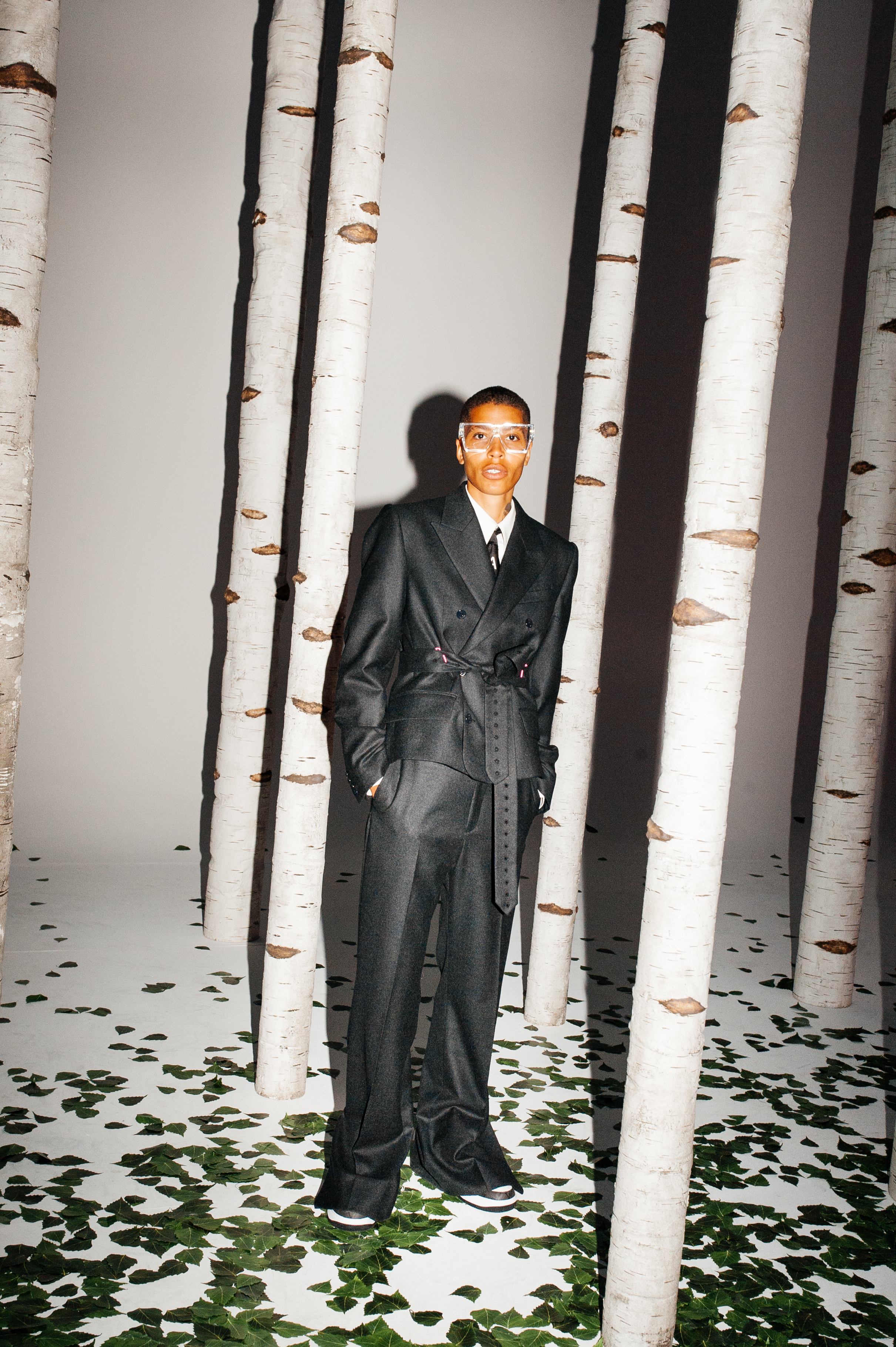 A section of the set juxtaposes a forest of birch tress with a replica of the dojo founded by Fiasco’s father on Chicago’s South Side. The chess theme nods to the cover of GZA’s seminal album “Liquid Swords,” as well as Vuitton’s signature Damier motif.

A keen chess player in real life, the Wu-Tang Clan rapper coached his co-star, artist and writer Kandis Williams. “Yesterday in rehearsal, he was teaching her how to play and everyone else was gone, and they were still playing, just the two of them,” Abloh recalled.

The designer, in turn, orchestrated a human game of chess, with rainbow club kids — in neon-colored earmuffs, spray-painted leather coats and jackets made from a patchwork of flyers — facing off against the new-gen suits: think sharp-shouldered cropped jackets with belts pierced with colored metal pin hooks.

“This idea of puncturing through is how a trunk is made. It’s like an identity thing, and I wanted to get away from the LV logo, which is obviously what everyone knows, and develop a piece of hardware that when you see it, over time, you start to recognize that that’s Louis Vuitton too,” he said.

The jackets were paired with pants that pooled around the ankles, or long skirts and dresses that referenced everything from kilts to kendo uniforms.

“My generation doesn’t believe in that hard line between gender. It’s, like, look at my fingernails, you know what I mean?” he said, flashing nails painted neon pink on one hand, and silver glitter on the other.

That gender-fluid spirit was captured by Kai-Isaiah Jamal, who last season became the first Black transgender model to walk for Vuitton. The poet and activist channeled both faces of the collection for WWD’s preview shoot, switching from a blue track suit with leather detailing to a gray belted suit.

“To change one’s mind is maximum human,” said Abloh. “I’m questioning anything, and the answer is conundrum, because that’s who we are. We don’t fit in a box.”

Virgil Abloh Has a Feeling for Eco Felt at Louis Vuitton

Thanks to Virgil, ‘Abloh-ism’ Is a New Word