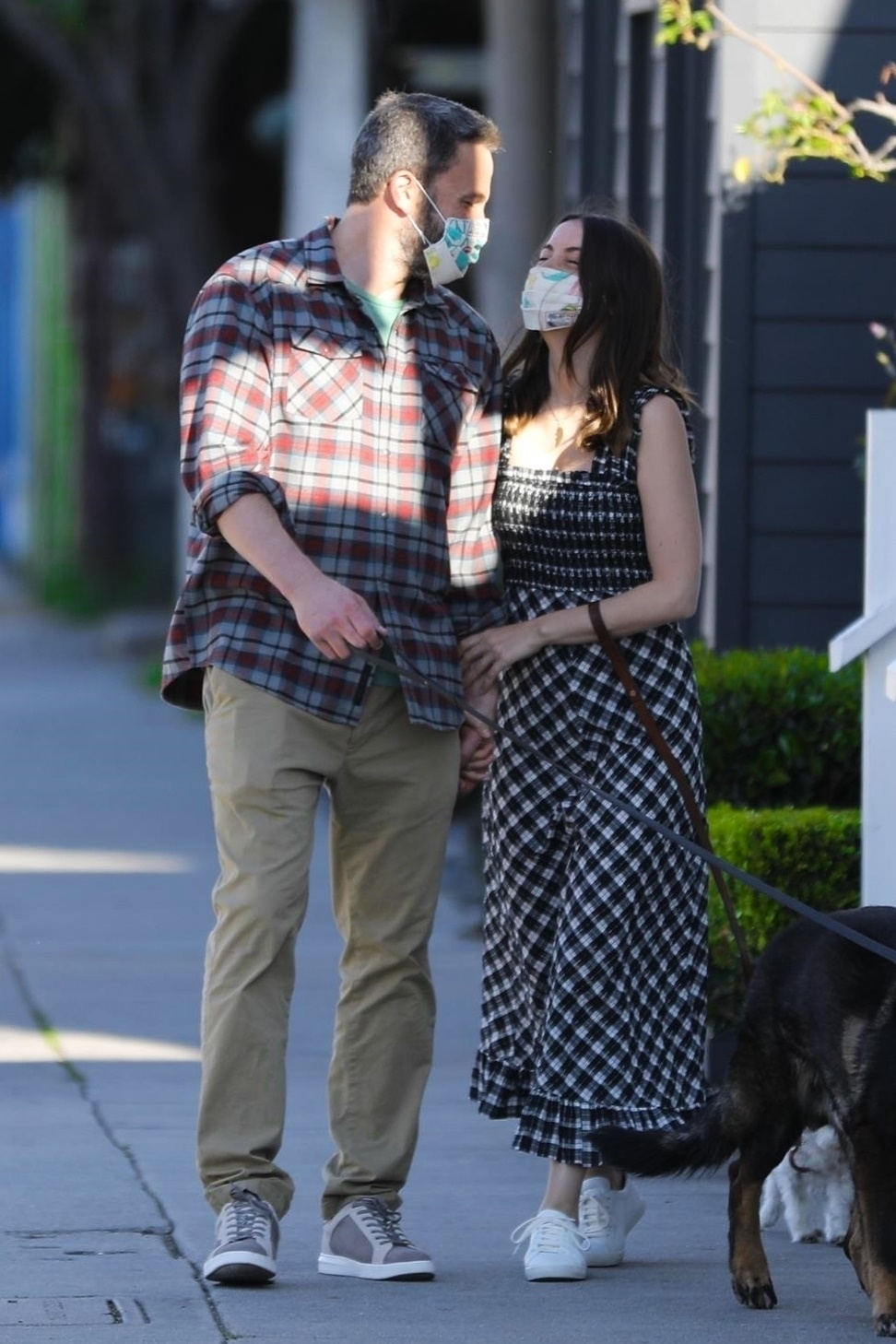 To be clear this isn’t the first time Ben Affleck and Ana de Armas have been photographed out with masks on. They were seen in masks last week, but we didn’t have access to those pictures. You can see those on JustJared. We were talking about Ben and Ana on our Zoom chat last night. Most people do not get them at all and think Ana is too young for Ben, although a few see how Ben can be charming. At least one person on our call still thinks they’re not a real couple because they’re too demonstrative. I don’t get that perspective at all. My friend Z said that it was gross that Ana and Ben have been constantly touching each other’s faces on these walks, especially because they’re picking up dog poop! I didn’t even think about that and she’s right about how gross it is.

These two can’t keep their hands off each other though, look at this move where Ana is holding his hand, grabbing his arm with her other hand, and smiling at the camera. Also do you think she’s the one who bought them the masks? I do, because they’re matchy. Ana’s seeksucker black check print dress is by Ganni and you can get it for $213 on ShopBop. (I got those details from Daily Mail, I wouldn’t have been able to find this dress on my own, but I did find it cheaper than their link.) 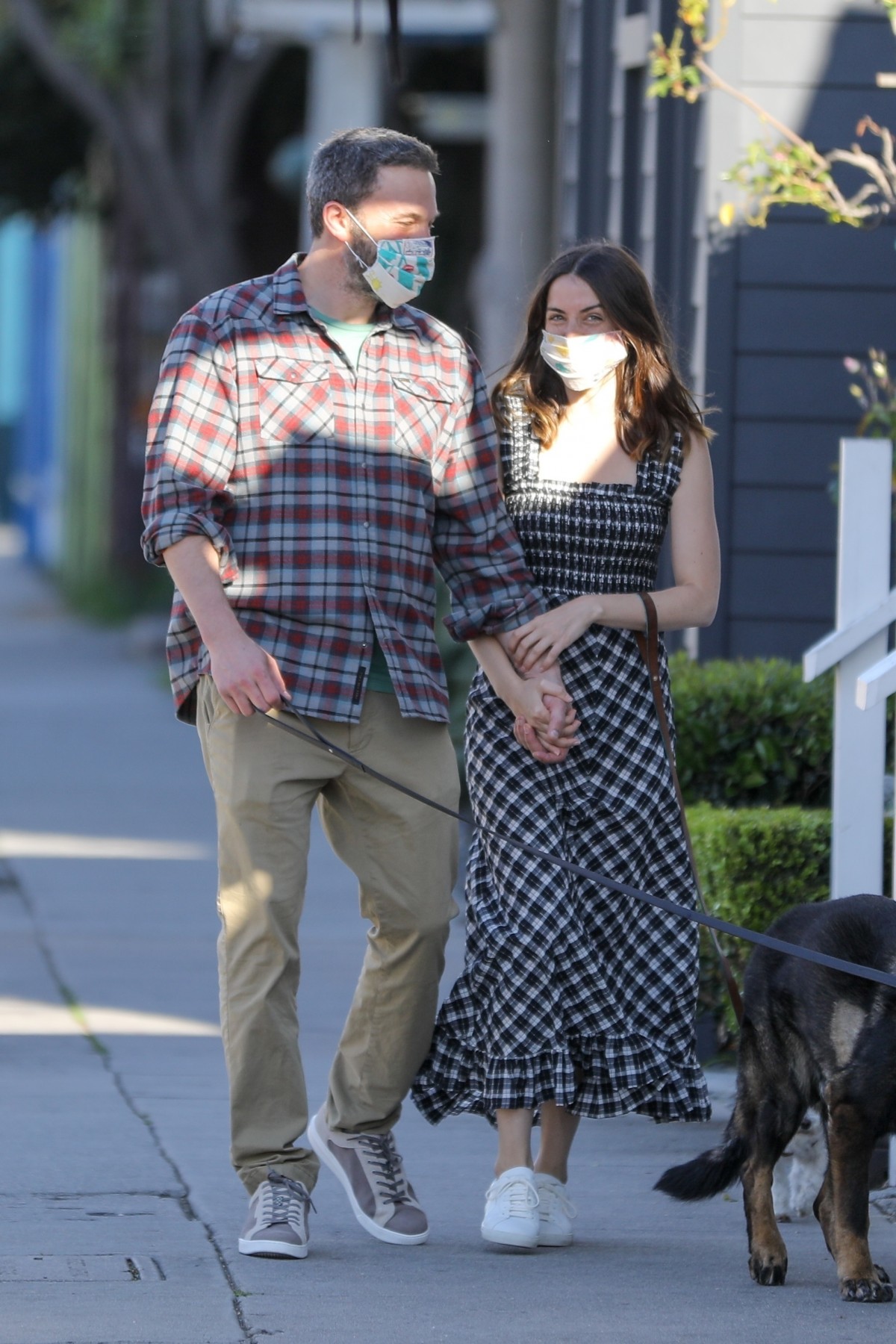 They might be in Venice, CA because Ana moved there. She was looking at a house in Venice Beach last month, although I can’t confirm that she moved. Ben isn’t spending all his time holed up with Ana with occasional breaks to walk the dogs and demonstrate their love. He and Matt Damon held an online celebrity charity poker tournament that raised a whopping $1.75 million for Feeding America. That’s incredible and good for them. Matt Damon is currently isolating in a small Irish town, where he was stuck after filming wrapped on his Ridley Scott film The Last Duel. His wife, daughters and dogs are with him though.

Oh and did you hear that Ana de Armas blocked one of her fan accounts, Ana de Armas updates, on Twitter? I think this post is the one that prompted her to do that. 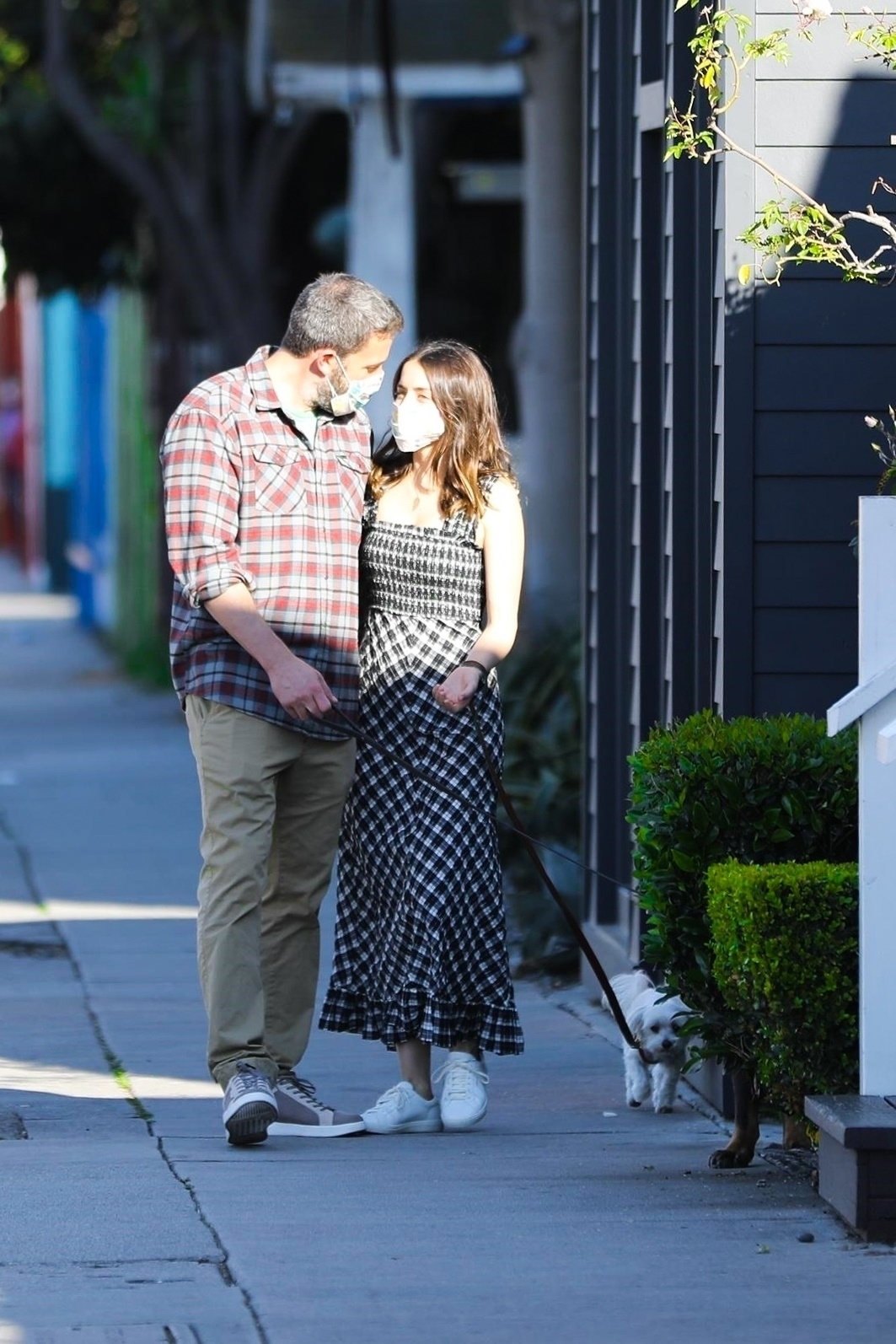 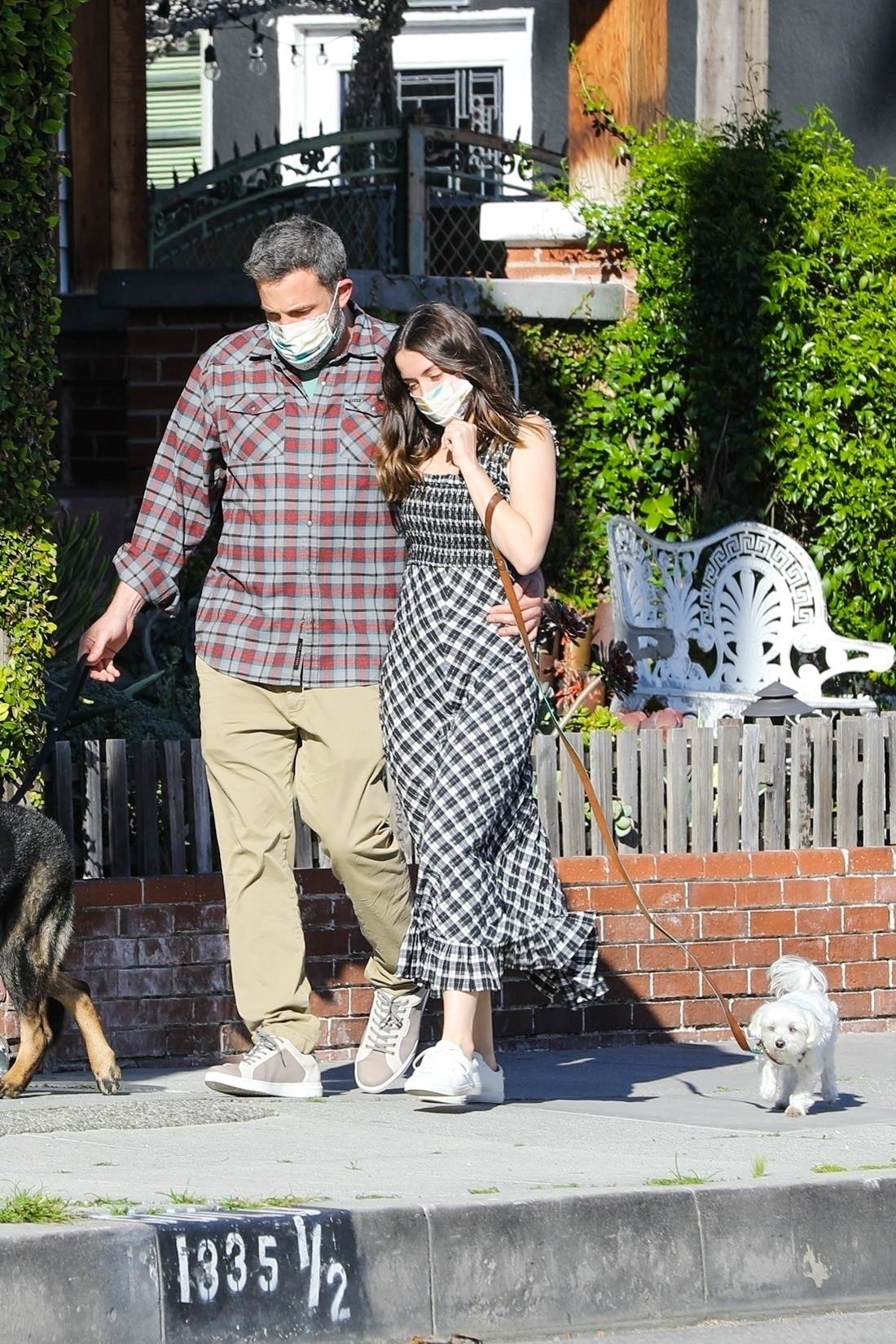 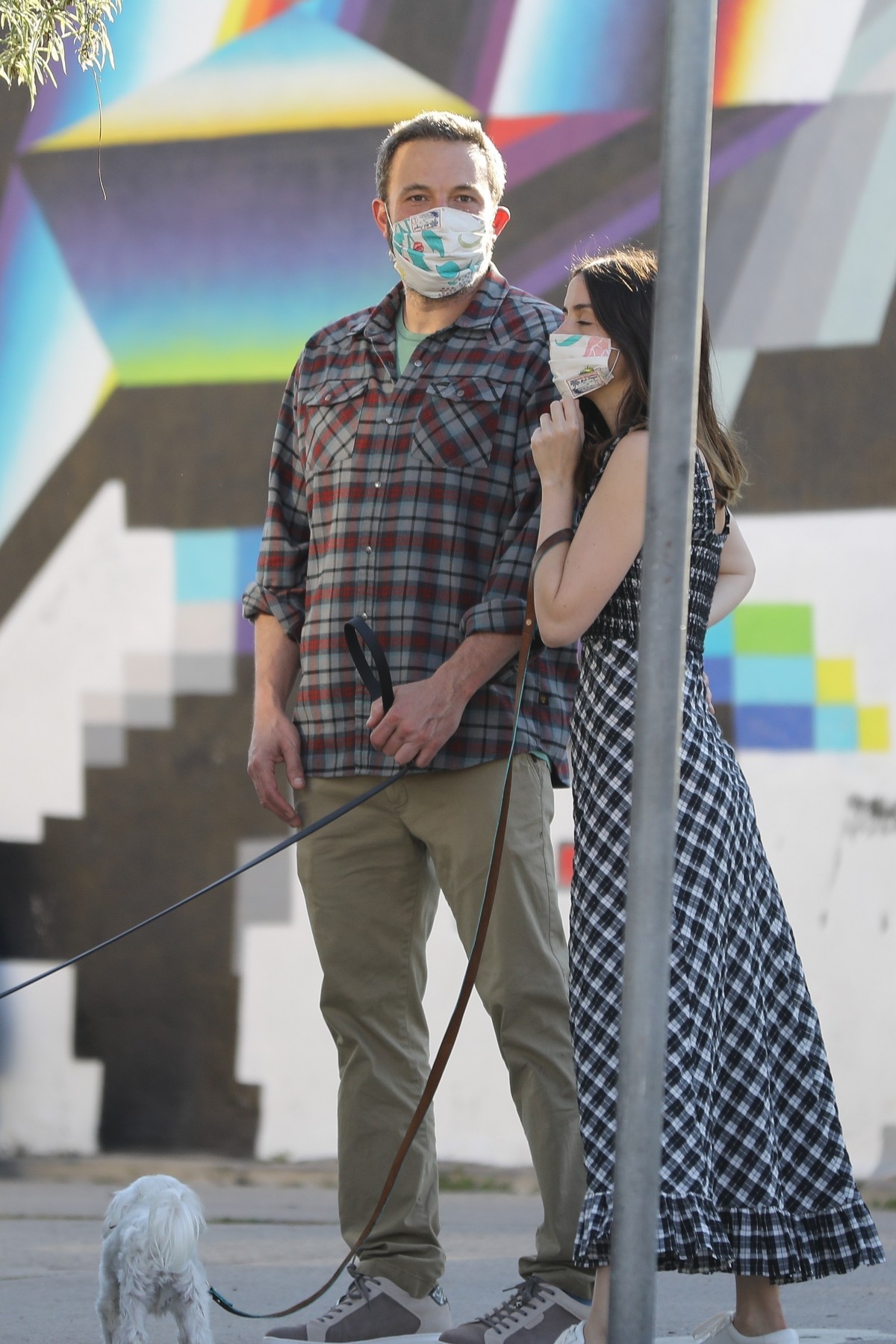