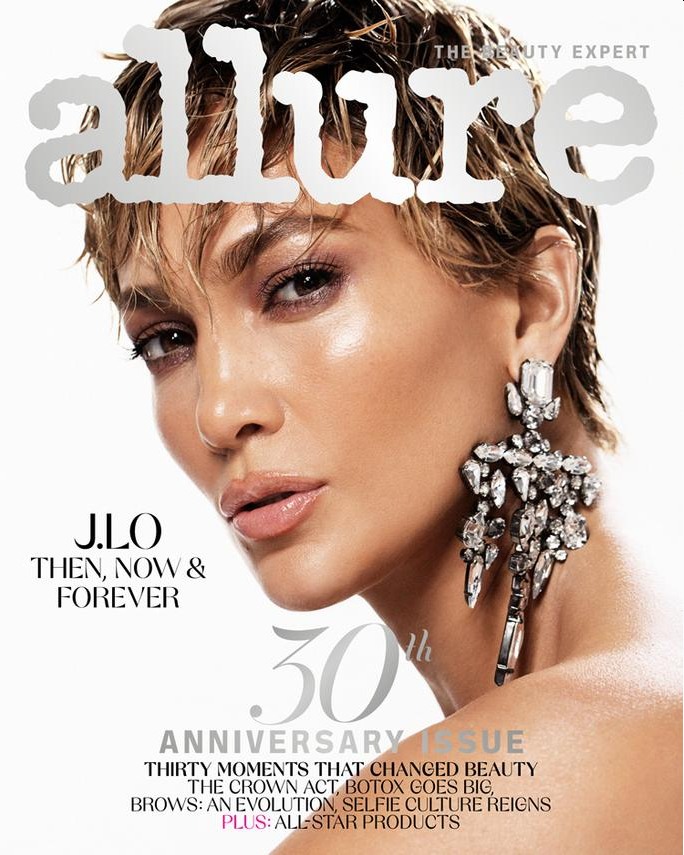 Jennifer Lopez covers the latest issue of Allure, in what was an interview done to promote Marry Me, which was supposed to be out this year but got pushed back until next year. Of course, Jennifer doesn’t care. She’s also promoting a million other things, like her beauty line and new music and everything else. Jennifer is probably one of the most “teflon” celebrities out there – bad stories simply don’t stick, and at this point, the only “bad” thing that’s really remained reputationally for Jen is her unlucky-in-love, unable-to-be-single life. That being said, she seems to have found her match in Alex Rodriguez, and I’ve noticed a real change in her since they got together. You can read the full Allure interview here. Some highlights:

The waifs: “When I came on the scene, it was kind of the time of the waif and everybody had to be stick thin. It was like, ‘Well, you’re not. How do you feel?’ I’m like, ‘I feel great about it!’”

On the Super Bowl Halftime show last year: “The idea was to show the best of, not just myself as an artist, but the best of women. The best of Latinos. I felt that I represented Latinos, I represented women, and I represented people in my age group in a light that was very positive and strong.”

On the pandemic: “I mean, the first part was like, ‘Wow, this is different.’ I think we all were filled with anxiety. We were in the Twilight Zone, like everybody else. I started trying to do things together. We would play base- ball outside or paint together. We never get to do stuff like that. I was trying to take advantage of the time. I miss being creative and running on 150. But Alex, of all people, was like, ‘I love it. I love being at home. I love doing my Zooms. I love knowing the kids are there, and you’re there all the time.’ It has been actually really good. We got to work on ourselves. We did therapy. I think it was really helpful for us in our relationship.”

Being snubbed for an Oscar nomination for Hustlers: “I was talking about this the other day. [My production partner] Elaine [Goldsmith-Thomas] made a post where she listed all the things I had been nominated for and won that season. And when it came to the Oscars, it was so obviously absent. It was a sting. I was like, ‘Okay, when you’re supposedly in everybody else’s mind supposed to be nominated and you’re not, what does that mean? Is it really real? Are the other ones real and this one isn’t?’ It came to a point where I was like, ‘This is not why I do this. I don’t do this to have 10 Oscars sitting on my mantel or 20 Grammys.’ The point is creating and the joy that I get from the things I get to put out in the world that entertain and inspire and empower people. I think my life is about more than awards.”

Going to BLM protests with her kids: “I said, ‘I want you guys to make me the signs because Mommy wants to get out there too.’ I’m not used to being in big crowds like that — I’m always on the stage. [My life is] car to back door to security to this to that. It was scary. I got a little anxiety, like, ‘How do you get out of the crowd?’ Once I got [into it], to be in the masses like that, I loved it. Like, ‘Wow, there’s a movement happening.’ So many people, different ages, races — it was a beautiful thing. We can’t just keep living our lives and thinking everything’s going to work itself out. No, it’s not going to work out. We have to get involved. We have to make changes. That was why 2020, as difficult and scary as it was, was so necessary. What we realized is that we’re all in this together. This is about our kids growing up in a world where they feel comfortable, where things are equal, and there’s more kindness and love than hate and division.”

It’s slightly amusing to me that Jennifer’s most immediate concern while attending BLM rallies with her kids is having easy access to an exit route! But I do think it’s cool that her kids went to her and told her that THEY wanted to go to the rallies and she was the one joining them and encouraging them to make signs. And I love what she said about coming out of the waif era. It’s really true – I always give so much credit to Jennifer and Beyonce for their then-radical self-acceptance and self-love of their curvier bodies. They both changed the way curvy girls felt about their own bodies.