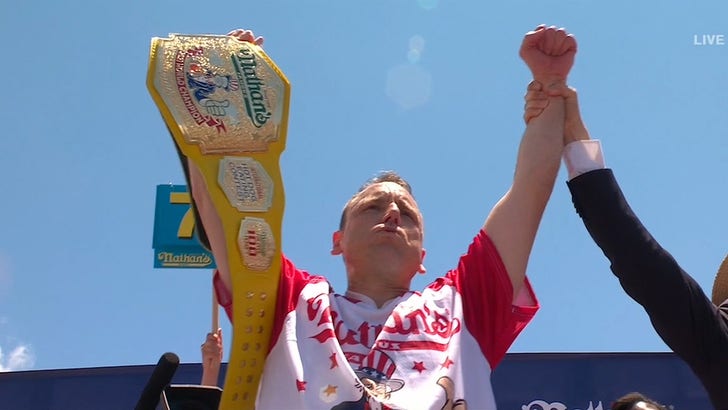 Joey Chestnut is again a hot dog eating-champion, breaking his own record for a stunning 76 wieners … something that would’ve been great to see, but made impossible by ESPN.

The annual Nathan’s Hot Dog Eating Contest was held once more Sunday — a 4th of July tradition now — and JC was gunning for an even higher count than last year’s haul … which clocked in at 75, a new world record at the time. In 2021, he surpassed it by one.

Joey was scarfing down dogs on camera, but when the crucial moment arrived for hot dogs 75 and 76 … the broadcast glitched up big time, and a still shot of Joey stayed frozen on screen for a good few seconds. Moments later, time had jumped … and everyone missed it.

As incredible of a feat it was for Joey, his performance was unfortunately outshined by the technical issue … which is going more viral than even Joey is right now. Some folks captured the flub live and reposted it on the internet … and yeah, it’s as bad as they’re making it out to be.

Anyway … congrats to Joey for taking the big prize (again) and holding on tightly to the belt. It’s not an easy task, especially when you’re pretty much tasked with one-upping your own stomach year after year … something he’s done successfully for quite a long time now.