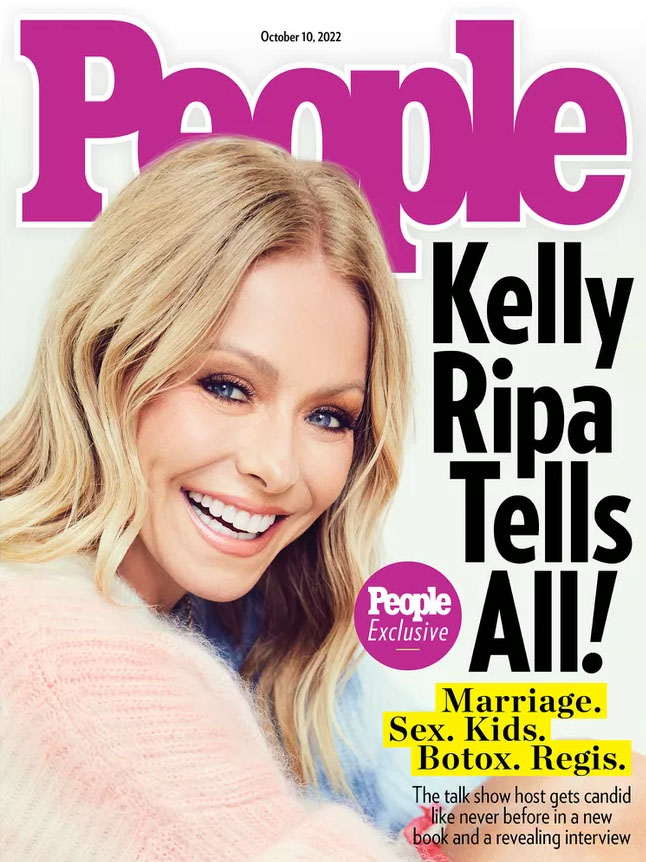 Kelly Ripa has a new book called Live Wire: Long-Winded Short Stories. Full disclosure, I kind of love that title. It’s a memoir and probably redundant to point out that it’s a tell-all because Kelly lives her life by telling all. I don’t dislike Kelly, actually. She reminds me so much of myself, only she was smart enough to add the rich and beautiful part to her fairy tale. But I’m a big mouth too and I tend to rub people the wrong way in all the ways Kelly does. That’s probably why I’m so hard on her, because I’m criticizing myself as much as her.

But we aren’t identical because I would’ve skipped this chapter. In her new book, Kelly is dishing on some behind the scenes on Live. While she doesn’t talk about Michael Strahan at all, she casts some shade on America’s favorite grumpy grandpa, Regis Philbin. Not only does she say their on-set relationship was frosty from the day they met, Kelly said she tried repeatedly to stay connected after he retired and he simply didn’t respond.

“What I learned from working with Regis Philbin was that my favorite stories were the imperfect ones. I learned by watching him,” says Kelly Ripa.

From her first appearance on Live! — when a psychic revealed her third pregnancy before she and husband Mark Consuelos had told their parents or their bosses — to the time she told the world about her daughter Lola walking in on her and Consuelos having sex, the 51-year-old talk show host has shown that no one is better at sharing life’s imperfections. But there are some imperfect stories she’s never told — including her early struggles on Live! and her complicated, sometimes difficult relationship with Philbin. “The biggest misconception is that it all came easily,” says Ripa. “People think I just showed up one day and was handed a job and I lived happily ever after and now everything’s perfect. But it never is that way.”

“That was the hardest chapter to write,” she says. “I don’t want to feel like I’m slamming anyone or that I’m being disrespectful. But I also want people to know it was not a cakewalk. It took years to earn my place there and earn the things that are routinely given to the men I worked with. Including an office and a place to put my computer.”

Landing the morning show gig following the departure of Philbin’s cohost Kathie Lee Gifford in 2001 was like “getting shot out of a cannon,” says Ripa, who was also starring on All My Children at the time. When her agent called with the offer, she was told: “They want you to know who your boss is.” No explanation given. “It was very ominous, and it did not feel good,” she says. Her agent also said the show didn’t want her “bringing an entourage.” She brought two people. “I came with hair and makeup,” she says. “It was not an unusual thing for people on a television show to show up with.”

Moments before she walked on stage, Philbin greeted her and the show’s executive producer, Michael Gelman, with: “Uh-oh, Gelman, it’s got an entourage.” It?! Her heart started racing. “I felt horrible,” she recalls. “He was probably trying to be funny, but at the same time it felt like a pile-on.” The tensions continued. “I understand that probably he didn’t want a cohost, but the network wanted me to be the cohost and I didn’t think I should pass up that opportunity,” Ripa says. “I don’t think it was fair to him. But it was also not fair to me.”

Still, her sassy spark gave Philbin’s curmudgeonly charm a fresh appeal. “There were good and bad days,” Ripa says. “I thought I’d grown on him. I think I did.” She treasures some memorably joyful moments with him away from the show. “Off camera and outside of that building, it was a different thing,” she says. “The handful of times we spent together, I so enjoyed. We went to the same resort once on vacation and he came to a dinner I hosted—one of the favorite nights of my life. I never laughed so hard.”

Philbin retired in 2011, but wounds opened anew when he told Larry King in 2017 that Ripa was “very offended” when he left, that he’d never heard from her again and had never been asked back. “The show had reached out many times,” says Ripa, pointing out that he appeared on its 2015 Halloween episode. “It makes me sad but it’s not something I will ever understand. I was steadfast in my attempt at communication. You can’t make a person befriend you.”

I actually think Kelly is doing herself a disservice by trying to interpret Regis’ actions and comments here. Like Kelly, if I’d heard, “it’s got an entourage” without any context, I’d probably be taken aback as well. However, it absolutely sounds like a joke Regis would make. I’ve never watched a full Live show and even I knew that. So Kelly’s sort of telling on herself that she didn’t do her due diligence before she walked on set. I’m not condoning calling another person “it”, just saying that I heard Regis refer to many people as “it” in the brief bits I watched of him. The fact that it took Regis a while to warm up to Kelly isn’t a surprise. He was a curmudgeon. Curmudgeons require a certain taste, you either have it or you don’t. (I happen to love them.) But you have to let them be when they need it. If Kelly pushed when Regis wanted her out of his face, she heard about it, I can promise you that.

As for this he said/she said postmortem, we only have the living person’s words to dispute what’s on record. We know that Kelly did not take Regis’ departure well. I don’t blame her, they basically sprung it on her. But “the show had reached out many times,” is not the same as Kelly contacting Regis. And “steadfast in my attempt at communication,” is very particularly worded. I’m sure Kelly wanted to stay in touch, but she is skirting around something here. It sounds like Kelly is still carrying a lot of pain from this. She admitted in the book she forgives but never forgets and that’s what this sounds like. I don’t blame her, but I wonder if her careful wording has anything to do with Joy Philbin and Kathie Lee Gifford being around to also set the record straight. 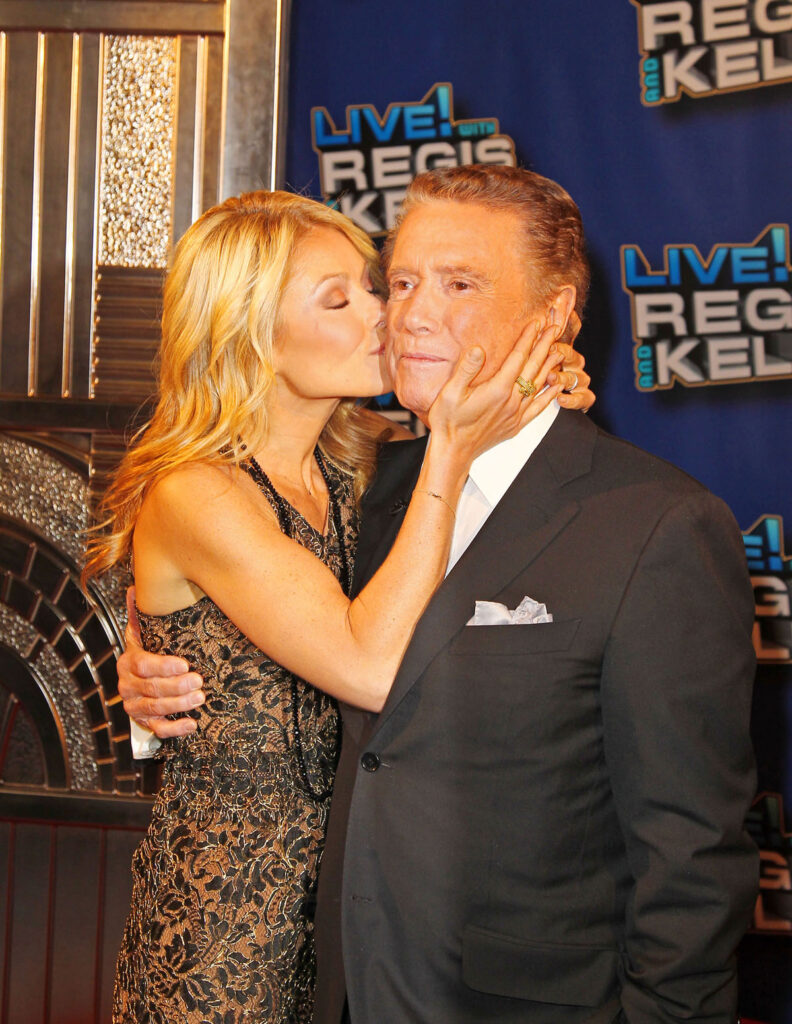 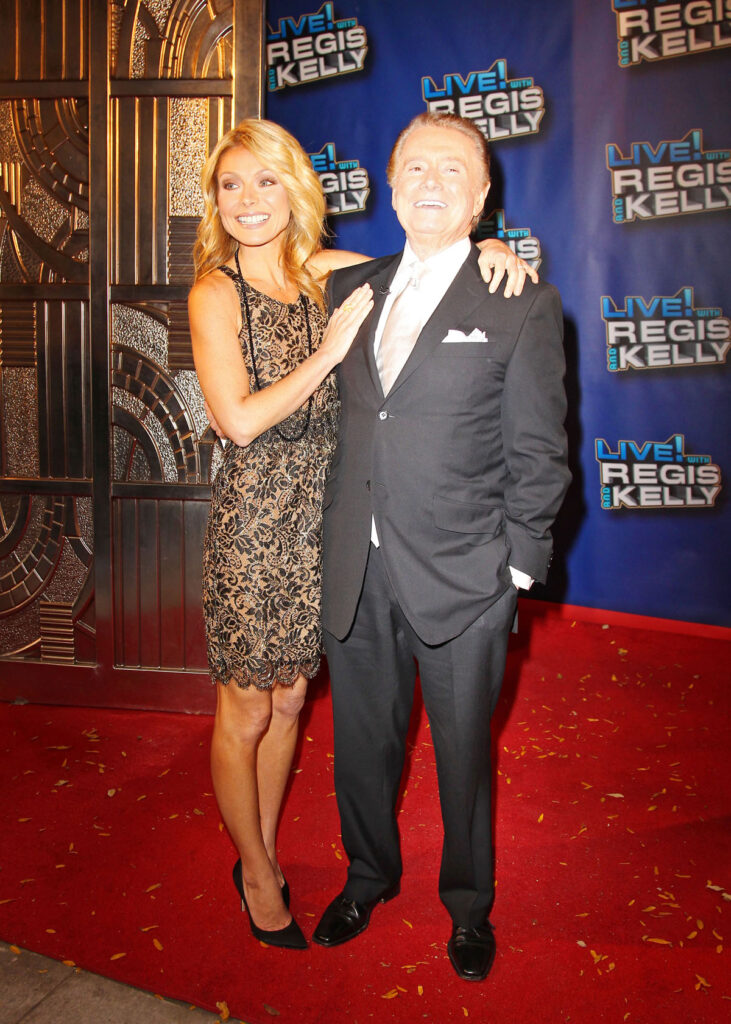