Kourtney Kardashian supported her boyfriend, Travis Barker, on “Saturday Night Live” just one week after her sister, Kim, hosted with the help of sister Khloe and mom, Kris Jenner.

Although Kourtney didn’t join the rest of her family last week for a sketch that lambasted both her and the entire Kardashian/Jenner clan, she definitely made sure to be on-hand to support Barker as he drummed alongside musical guest Young Thug.

Kourtney shared an image of herself laughing and cuddling up to the Blink-182 drummer ahead of his performance. Barker sits shirtless on a couch backstage while Kourtney sits on his lap playing with a pair of drumsticks.

“Live from New York,” she captioned the series of images, borrowing from the long-running sketch show’s iconic opening line. 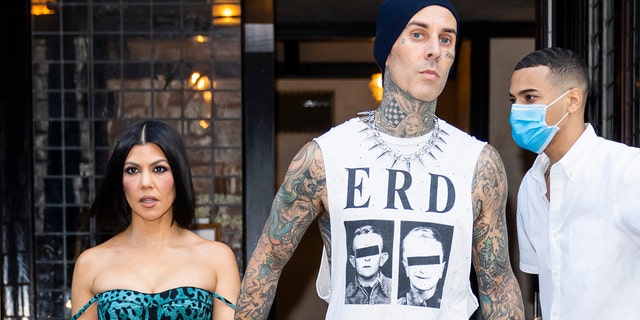 Barker joined Young Thug, who was the musical guest on host Rami Malek’s episode, on stage for performances of his songs “Tick Tock” and “More Than Anything.” The drummer remained shirtless for both sets but received a large smattering of applause for his work on the kit.

Kourtney’s appearance backstage at “Saturday Night Live” comes just one week after Kim parodied her and Barker in a sketch titled “People’s Kourt” that saw her act like her sister as a judge on a reality TV courtroom series. In it, she presided over legal squabbles that her famous family was having. While Kendall and Kylie Jenner were played by cast members, Khloe and Kris were on hand to play themselves.

Kim then mocked her older sister further, taking aim at her PDA-filled relationship with Barker (played by Mikey Day). The duo sat on the judge’s chair making out while the announcer took digs at the former Blink-182 drummer. Also given jabs during the sketch was Kim’s estranged husband, Kanye West, as well as O.J. Simpson, who their father, Robert Kardashian, helped defend in his high-profile murder trial in the 1990s.

However, despite the famous family living for drama, it seems that Kourtney was fine with the parody. Just one day after the episode aired, the eldest Kardashian sister took to her Instagram Story to praise her younger sister and noted how proud she was of her hosting job.

Although there seems to be no hard feelings between the siblings, who had previously feuded with one another in the final seasons of “Keeping Up With The Kardashians,” many were quick to note that Kourtney was only at the “SNL” stages once her sister had cleared out for the week.