Thelma & Louise for the MeToo generation: Promising Young Woman shows men aren’t the only violent sex… and its tipped to win Oscars for star Carey Mulligan and its dazzlingly talented writer

It’s a film so dark and provocative that its star, Carey Mulligan, was fearful of taking the lead role.

When it was premiered at the prestigious Sundance Film Festival last year, members of the audience erupted in anger. And perhaps that’s no wonder, because Promising Young Woman, released in the UK shortly, dares to suggest a very uncomfortable truth – that women are just as violent, ruthless and full of rage as men.

Already hotly tipped for an Oscar, the film has been described as ‘Thelma & Louise for the #MeToo generation’, after the 1991 road movie which showed two women taking the law into their own hands following a sex attack. 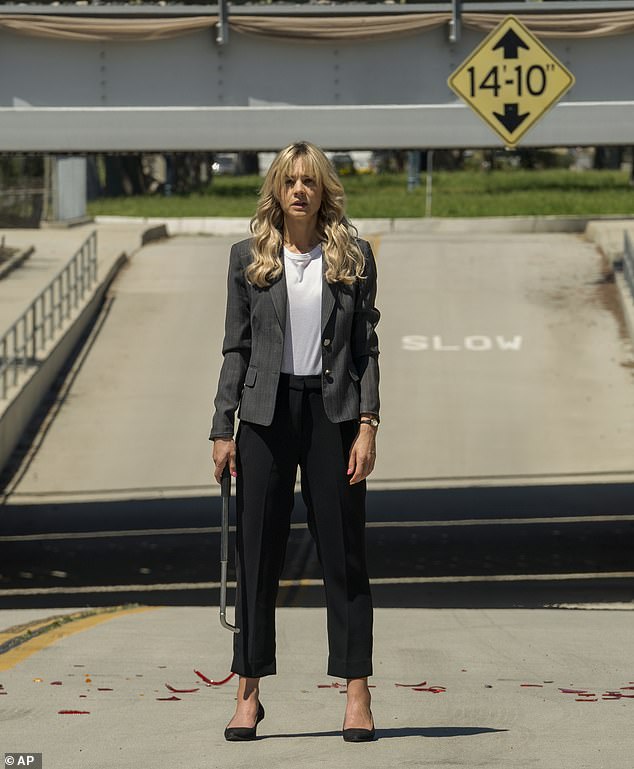 Carey Mulligan in Promising Young Woman, a dark and provocative film, as a 30-year-old medical school dropout on a mission to avenge her best friend’s rape and suicide

Carey Mulligan and Christopher Mintz-Plasse in a scene from Promising Young Woman, a film tipped for an Oscar run

Promising Young Woman is written and directed by society beauty Emerald Fennell, who was the talented nurse Patsy Mount in the BBC’s Call The Midwife and plays Camilla Parker Bowles in the latest controversial series of Netflix’s The Crown.

The film features Cassie, played by Mulligan, a 30-year-old medical school dropout on a mission to avenge her best friend’s rape and subsequent suicide. By day, she has a dead-end job in a cafe but at night, in various bars and clubs, she pretends to be intoxicated to pick up men who see her as an easy target. They soon learn differently, as Cassie callously dispenses her own rough justice.

‘The great thing about this movie is it shows rage and deals with trauma from a woman’s point of view,’ says one leading producer.

‘The reason Thelma & Louise was such a shock to audiences is that it was one of the few times a story like that, of the trauma and anger women feel after a sexual assault, was portrayed on the big screen. It upended the norms and made audiences feel uncomfortable – which is a good thing.’

Both films feature sex assault victims who are discredited because they were drunk.

In Thelma & Louise, two friends head off for a holiday at a borrowed fishing cabin, but it goes spectacularly wrong when the pair stop off at a bar and Louise, played by Susan Sarandon, shoots dead a man who is attempting to rape Geena Davis’s character Thelma. Despairing of the police believing their story, the pair drive on, committing myriad crimes on the way.

They never reach the fishing cabin, but end up driving their 1966 Thunderbird convertible over the Grand Canyon, an ending which has since been voted one of the great classic film moments. 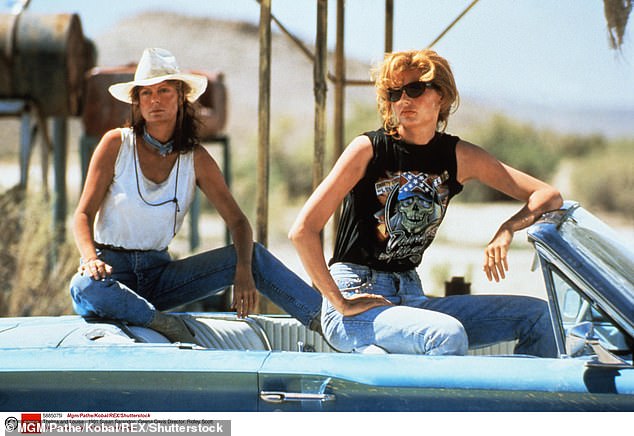 It empowered a generation of young women, although some critics dismissed the film as a misogynist tale about women who, put under pressure, lose what remains of their reason and suffer the ultimate punishment. Thirty years on, Promising Young Woman – released in the US last month – looks set to create similar controversy, with some critics decrying it as a simplistic, man-hating revenge movie that glorifies violence. During a public test screening, a fight even started between two audience members.

‘One person was very angry about a scene, and the other person was saying “Well, if you don’t like it, you don’t have to watch it” or “If you don’t like it, you can leave”,’ Fennell, who was in the audience, recalled. ‘It was quite visceral, and that was quite shocking because obviously I wanted to make a film that was thought-provoking that people talk about, but I wasn’t expecting that.’

Some have described the film as a commentary on the 2017 #MeToo movement, which encouraged women to break their silence on sexual harassment and saw legendary Hollywood producer Harvey Weinstein, following decades of abusing aspiring actresses, jailed for 23 years for rape.

However, Fennell – who insists the screenplay is not based on one woman’s personal experience but rather the experience of women everywhere – says she has instead tapped into gender issues that have held sway for decades. ‘There’s nothing in it that isn’t extremely commonplace,’ she says. ‘Nobody in the film is a bad person. The men and women are all just part of a culture with slightly dodgy attitudes about sex. What’s important to me is asking questions about why we hold these attitudes and how we might change them – so this toxic culture doesn’t continue to persist.’ 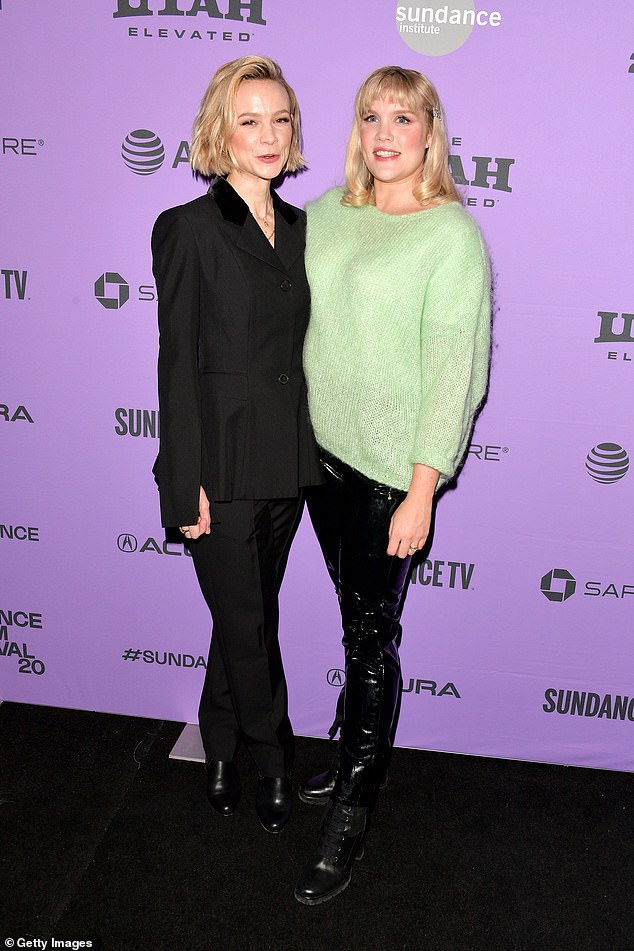 Indeed, when it comes to meting out justice, Cassie is settling scores with women and men – meaning anyone who doesn’t believe her friend is telling the truth after her attack, or who does nothing to help, is taken to task in often brutal ways.

The point is made by casting actors not known as classic villains, but nice guys who are shown failing to see their actions are wrong. Among them is Christopher Mintz-Plasse, the lovable geek Fogell McLovin from 2007 teen movie Superbad, who admits he doesn’t even know Cassie’s name after she drops her drunk act when back at his apartment.

It also stars Adam Brody, heart-throb nerd Seth Cohen from TV series The OC, former comedian Sam Richardson and Ray Nicholson, son of acting legend Jack, whose bad-boy reputation was perhaps intended to add another micro-subtle layer to the audience’s discomfort over the subject matter. For her own part, Mulligan, stepping away from some of the more traditional period roles for which she is well known, admits she was initially daunted by Fennell’s screenplay. ‘On first reading, I was scared of it,’ says Mulligan. ‘Meeting Emerald [Fennell], I started to understand the nuance to it.’

Her gamble in taking the role has certainly paid off: to date the film has been nominated for nearly 40 US awards and won seven. In December, Mulligan scooped The Los Angeles Film Critics Association award for best actress, while Fennell won an honour for best screenplay, an honour that for other films has translated into an Oscar nomination.

‘The buzz around Carey Mulligan and Emerald Fennell has been growing,’ confirms a source at the Academy of Motion Picture Arts and Sciences, the body that votes on the Oscars.

Either way, the awards so far are yet more feathers in the cap of the highly accomplished Emerald, who at 35 and alongside her acting credits already has successful children’s novels and two Emmy Award nominations, the latter for writing the second season of Killing Eve, the BBC drama about a psychopathic female assassin which she took over from friend Phoebe Waller-Bridge.

It’s a world away from the comfortable and privileged upbringing Fennell enjoyed alongside her sister Coco, now a successful fashion designer whose clothes were used in Promising Young Woman, courtesy of society parents, the jeweller and author Theo and Louise Fennell, known as one of the best-connected couples in London.

‘Their life was like a revolving Rolodex of A-listers from the Noughties,’ a family friend told The Mail on Sunday.

‘Theo and Louise went to The Ivy most nights with a roll-call of A-list stars, including Hugh Grant and Elizabeth Hurley, Sting and Trudie Styler and the Beckhams. They, Emerald and her sister Coco often holidayed in St Tropez with “Uncle Elton” John.’

Emerald attended the £40,000- a-year Marlborough College at the same time as Kate Middleton, who was three years her senior, before reading English at Oxford University. By then she had already embarked on her acting career, and in a neat twist appeared alongside Mulligan in an episode of Lynda La Plante’s gritty police drama Trial And Retribution when they were both 18.

In fairness, Fennell is very mindful of her advantages, telling The Wall Street Journal that it spurred her on to work harder.

‘I’m very aware that part of my luck was that I had parents who lived in London who were able to support me,’ she said. ‘So I have to work really hard because that head start that people like me get, you need to prove you deserved it.’

Now, in her first screenplay, she has shown she ‘isn’t afraid to go into dark corners’, as the leading producer puts it. They added: ‘For too long, women haven’t been allowed to show their anger on screen. It was perceived as shameful. Men could show rage and go around blowing things up and gunning people down, but women were supposed to suck it up.

‘Millions of women were victims of sexual abuse, but they were the ones feeling the shame, not the perpetrators. Then along came the #MeToo movement and suddenly it was OK for women to name their rapists, to speak publicly about men like Harvey Weinstein whose behaviour had been known about and tolerated for years. This film is so powerful because it’s giving power back to the woman.’

It is likely to be one of many new dramas tackling the subject, with a commissioning producer at Netflix confirming there had been ‘very noticeable change’ in the type of material being sent to him.

‘Suddenly, women realised they did have a voice and they could bring these powerful, seemingly untouchable men down,’ he says. ‘We’ve been commissioning a lot of projects from female writers.

‘These are subjects which used to be taboo in Hollywood, but times have moved on and now projects like this are being made and finding an audience.’

Fennell’s next venture, meanwhile, is a retelling of Cinderella, on which she is working alongside family friend Andrew Lloyd Webber. Scheduled for May, it’s safe to expect that this musical may take a more controversial perspective than the one we know and love.