AceShowbiz –Randy Quaid might be giving Caitlyn Jenner a run for her money. The “National Lampoon’s Christmas Vacation” star has declared that he is “seriously considering” running to be governor of California against the transgender icon, who already announced her candidacy a week earlier, promising that he will “clean up” corruption.

On Tuesday, April 27, the 70-year-old actor voiced out his political aspiration via Twitter. He declared in a tweet that read, “I’m seriously considering running for governor.” He further explained, “The prosecutorial corruption in California (esp Santa Barbara & the Bell scandal) is rampant; and I promise that if elected I will clean up the District Attorney Offices throughout the state,” followed by a hashtag, “#RandyQuaid4CAGOV.”

Randy Quait declared that he is ‘seriously considering’ for gubernatorial bid.

Randy’s announcement came nearly a week after Caitlyn announced her own bid for the role. On April 23, the transgender icon tweeted, “I’m in! California is worth fighting for.” Through a press release, she additionally pointed out, “I am a proven winner and the only outsider who can put an end to Gavin Newsom’s disastrous time as governor.” At the time, Randy showed his support by tweeting, “Go! @Caitlyn_Jenner.”

Randy Quait showed his support to Caitlyn Jenner on Twitter.

Caitlyn’s decision to run against incumbent Governor Gavin Newsom in the upcoming recall vote has been met with general coldness and ridicule. One disapproving tweet has got nearly 50K likes. It read, “Caitlyn Jenner announced she’s running to be governor of California. I checked her website and there’s nothing about any platform or policies but there are links to buy merchandise.”

“That’s all you need to know about her priorities right there,” it continued to read. Another tweet sounded off similar sentiment, “Caitlyn Jenner running for Governor of CA – no experience, no platform or policies, no thank you. Grifters gonna grift.”

Caitlyn was not the only one receiving skepticism and mockery for her governor bid. Randy was also met with similar criticism. Responding to Randy’s April 27 tweet, U.S. Congressman Ted Lieu replied, “Dear @RandyRRQuaid: You made the same mistake as @Caitlyn_Jenner.” 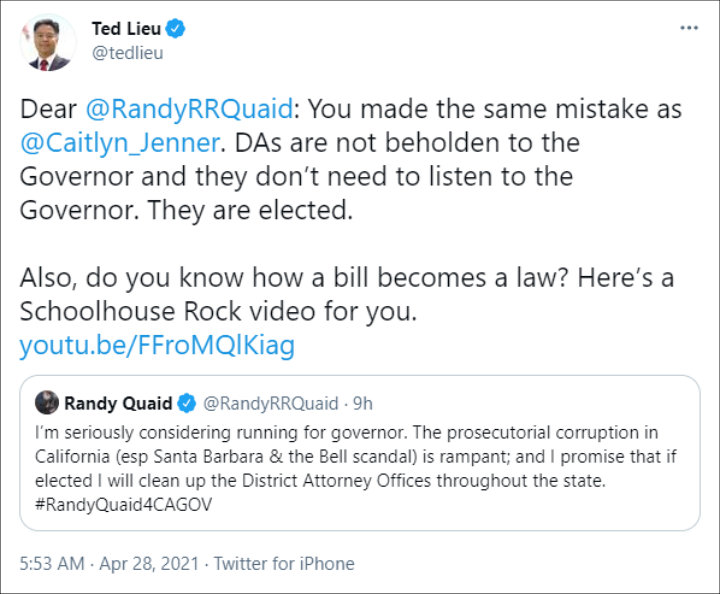 Ted went on to explain, “DAs are not beholden to the Governor and they don’t need to listen to the Governor. They are elected.” He went on further, seemingly schooling the actor, “Also, do you know how a bill becomes a law? Here’s a Schoolhouse Rock video for you.”

If Randy runs, he will join a list of challengers that include former San Diego Mayor Kevin Faulconer as well as San Diego businessman and former gubernatorial candidate John Cox.