If you’ve been “Keeping Up With The Kardashians” on E! for the last 14 years, then you’re probably not looking forward to the upcoming end of the long-running reality series. The award-winning program has been on the air since 2007, but following the highly-anticipated conclusion of the series, fans are going to have to find a new way to stay up to date with the famous family.

In a trailer for the “Keeping Up With The Kardashians” reunion, which was released via YouTube on June 9, host and network executive producer Andy Cohen teased the two-part event to be one of the most dramatic viewers have ever seen. “For the first time ever, I’m grilling the Kardashian-Jenners,” Andy says in the clip. The first part of the tell-all is set to air on E! at on June 17 at 8 p.m. ET.

Fans have loved watching the cast — including Kim Kardashian West, Kourtney Kardashian, Khloé Kardashian, Kendall Jenner, Kylie Jenner, Rob Kardashian, Scott Disick, and matriarch Kris Jenner — grow up over the 20 seasons, but in September 2020, the family announced “Keeping Up With The Kardashians” was coming to an end.

“It is with heavy hearts that we say goodbye to ‘Keeping Up With The Kardashians,'” read a statement from the entire family. “We’ll forever cherish the wonderful memories and countless people we’ve met along the way.” For a rundown of what you can expect from the reunion, especially the juiciest moments from the trailer, keep scrolling. 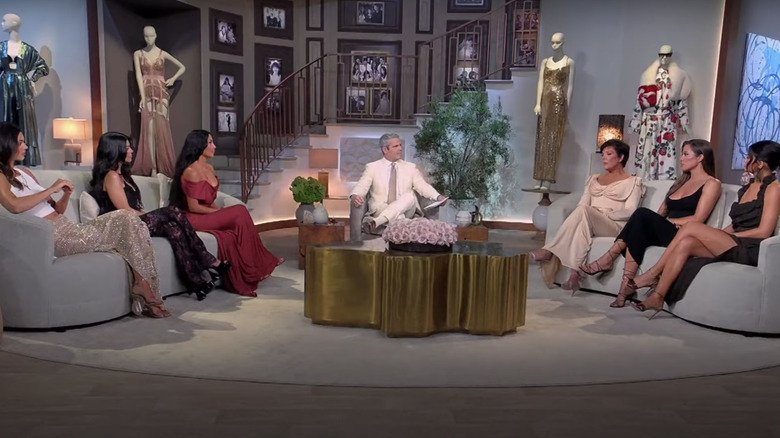 The Kardashian-Jenner family has made headlines for many reasons, and their biggest controversies and scandals are going to be divulged in the upcoming “Keeping Up With The Kardashians” reunion. Between Khloé Kardashian’s tumultuous romance with Tristan Thompson to the family’s strained relationship with Caitlyn Jenner, it seems host Andy Cohen isn’t leaving any stone unturned.

In the reunion trailer released on June 9, fans get a glimpse into the dramatic tell-all. “I’ve got to be honest, my mom’s a bit nervous,” Kim said in the first snippet of the teaser, which featured Andy entering her dressing room. “[It’s okay to] talk about all this s**t,” he promised.

As the cast appeared on set, the tone became obviously more serious when Andy asked Kourtney Kardashian about the demise of her relationship with Scott Disick. “I think the substance abuse was the deal-breaker,” she said, before Andy asked if Scott approves of her new relationship with Travis Barker. Khloé Kardashian was also grilled, as Andy inquired whether or not she knew Tristan would cheat on her for a second time. Finally, the trailer ended in total suspense with the “Watch What Happens Live” host wondering if Kris has “forgiven” ex-spouse Caitlyn for their turbulent relationship.