Products featured are independently selected by our editorial team and we may earn a commission from purchases made from our links; the retailer may also receive certain auditable data for accounting purposes.

The “watch party platform” Scener is giving DC Comics fans a chance to attend an exclusive screening of Zack Snyder’s Justice League, with an appearance from the director himself. Scener, which combines streaming entertainment content with video chat (sort of like a Zoom-style screening room with friends), is hosting the event in partnership with HBO Max. 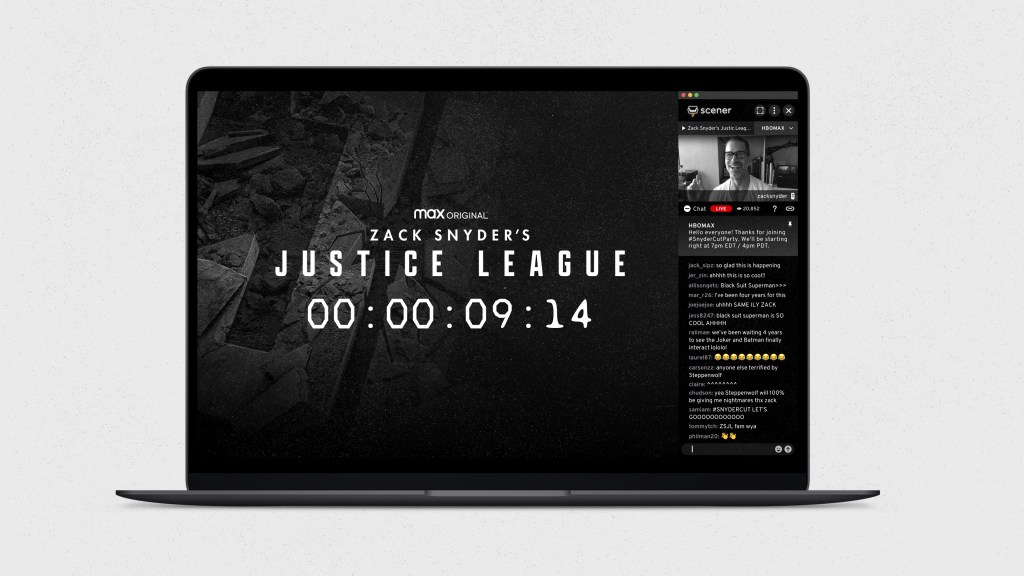 The fan screening of Zack Snyder’s Justice League takes place on Thursday, March 18 — the same day the film premieres on HBO Max. The screening starts at 7pm EST / 4pm PST on Scener.com and will be followed by a live video discussion with Snyder himself.

Tickets to the watch party are free, but you’ll need an active HBO Max subscription to join (you can sign up for HBO Max here). You can then grab a “virtual seat” to the screening by heading to snydercut.scener.com.

Yes, You Can Get a Pair of New Sony Wireless Headphones for Under $40

After a Year of Quarantine, Studies Say Spring Cleaning Could Be a Major Mood Booster

Chasteness, Soda Pop, and Show Tunes: The Lost Story of the Young Americans and the Choircore Movement

“I’m excited to finally share my vision for Justice League in a virtual screening with our incredible fanbase who, through the power of community and an inspiring grassroots campaign, played a major role in making this premiere possible,” Snyder says in a press release.

“Our partnership with HBO Max for Snyder’s iconic film release signifies another major leap forward for co-watching, cementing this format far beyond the pandemic-era as a movement that’s driving the future of streaming entertainment,” adds Scener co-founder and COO Joe Braidwood.

Scener says it can host up to one million participants in its virtual theater, and fans in the virtual screening will be able to utilize a live chat feature to discuss the film and react to scenes while the movie is playing. Snyder, meantime, will introduce the film beforehand and chat live throughout the viewing, with fans able to post questions to the chat along the way. Scener has also promised appearances from some surprise “VIP invited guests.”

The watch party will be accessible to users on both mobile and desktop devices. Sign up for an HBO Max subscription here and then RSVP for the watch party at snydercut.scener.com.

Zack Snyder’s Justice League arrives on HBO Max on March 18th, three and a half years after a Joss Whedon-completed version landed in theaters. Snyder had directed part of Justice League before he left halfway through filming to deal with the sudden death of his daughter. Fans have since demanded the “Snyder Cut” version of the film, which will now finally see the light of day on HBO Max.