She is the dog that Miranda Hart credits with restoring her self-esteem, the ‘loyal, loving best friend’ who was her constant companion for the past 13 years.

Now, the 48-year-old actor and comedian has told of her ‘excruciating sadness’ after revealing that her dog, Peggy, passed away last week, leaving her so heartbroken she is taking a career break to recover.

The announcement, made on Instagram on Monday, has been greeted with thousands of messages of condolence.

Miranda was so devoted, she made her pet the subject of her 2016 memoir, Peggy & Me. She acquired the shih tzu/bichon frise cross as a puppy in 2007 while appearing in the hit sitcom Not Going Out.

She was at a ‘low ebb’ after a relationship break-up and she credited Peggy’s uncomplicated and selfless devotion with helping her to recover.

‘I realised it’s better to be single than to be in a relationship with someone who doesn’t give kind, loving and trusting approval,’ she wrote in her memoir. ‘I had a being who loved me. It didn’t matter that it was just a dog.’

The duo soon became a familiar sight on the streets near Miranda’s West London home, and the proud owner took delight in documenting Peggy’s exploits on social media.

Over the years the dog became so popular that she acquired her own fan club and was inundated with gifts from all over the world.

Now, sadly, the canine companion Miranda credits with helping her through some life-changing moments has been laid to rest, leaving her bereft.

Here, KATHRYN KNIGHT looks back at some of their most heart-warming moments. 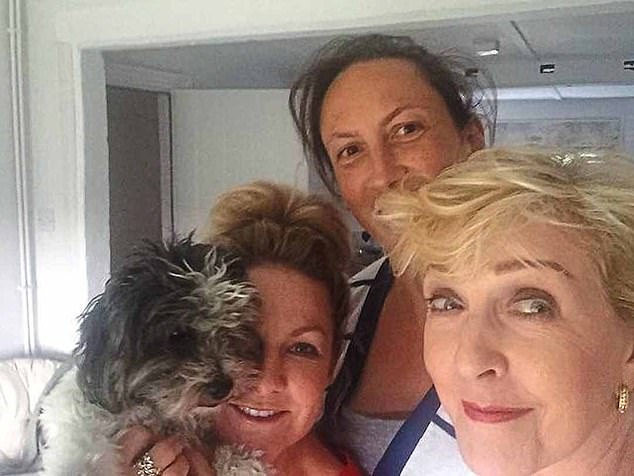 Group hug: Peggy steals the limelight from the stars of the Miranda TV show (from left) Sarah Hadland, Miranda herself and Patricia Hodge 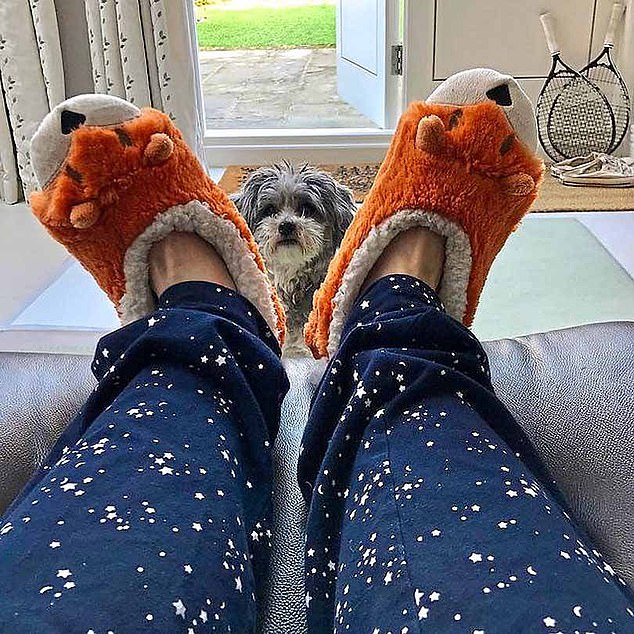 Sole fan: But Peggy’s looking a bit pensive. Could these little monsters on Miranda’s feet really come to life and bite back? 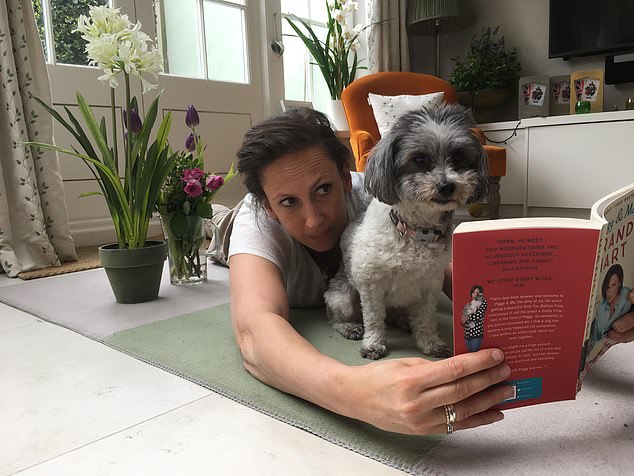 Tale wagging the dog: The inseparable pair focus on the words of Miranda’s memoir, Peggy & Me. She’s got a nose for a story 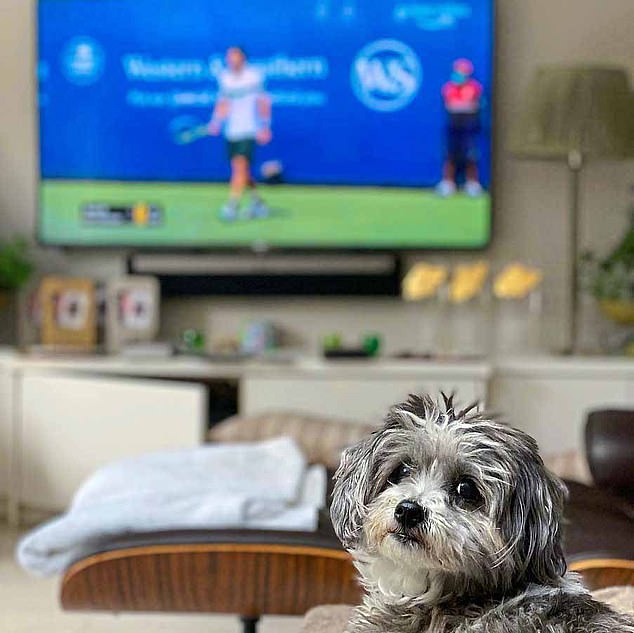 Where’s the ‘paws’ button? Miranda may like tennis but she must be barking if she thinks this armchair fan will enjoy it 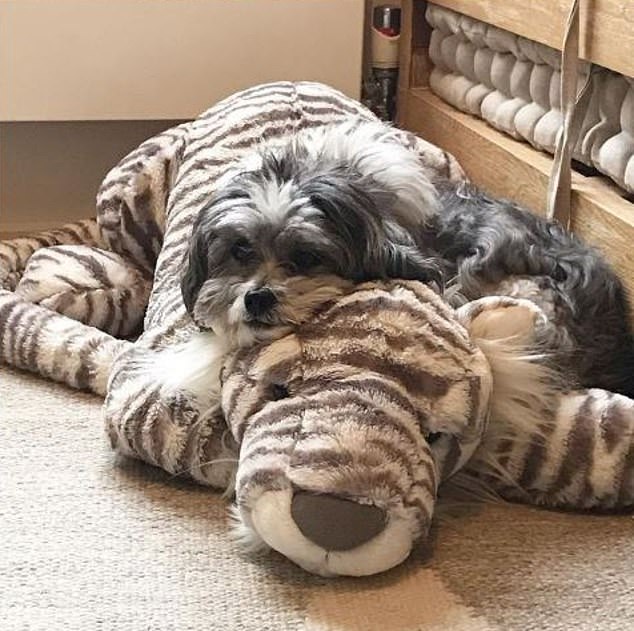 Tiger awww: Snuggling up after a ruff day. Happily, in Miranda’s household the cats — even the big ones — know the pecking order 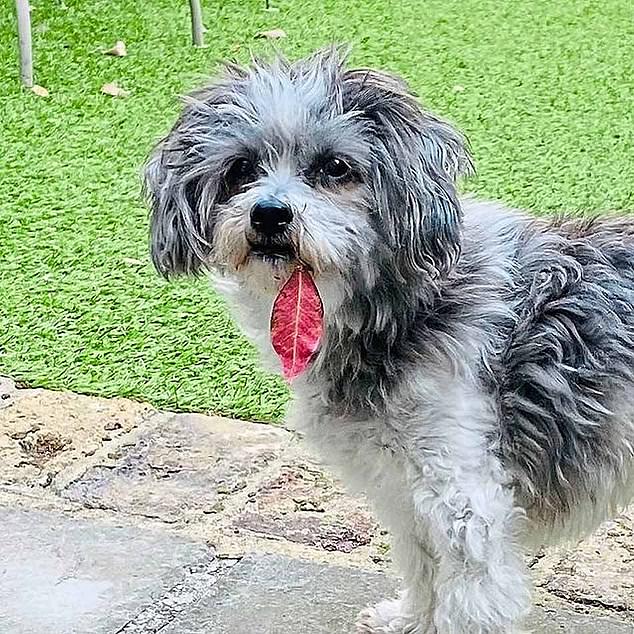 I’m a be-leaf-er: It’s not a lolling tongue, just a spot of tidying up in Miranda Hart’s garden in September 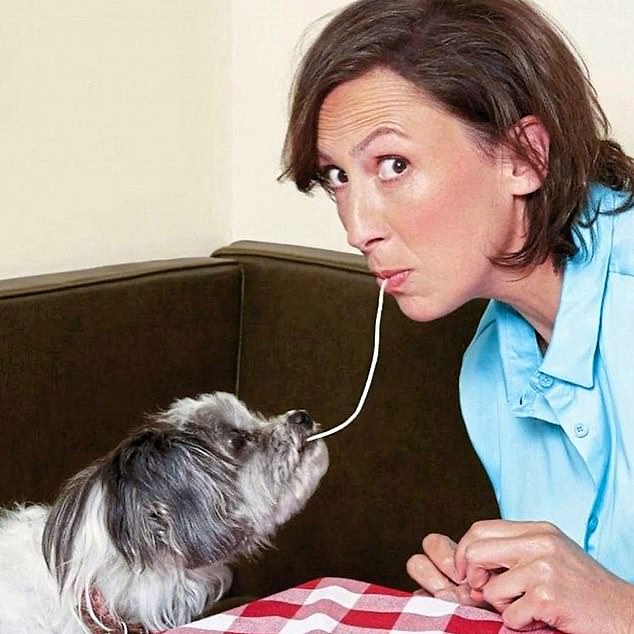 Bone apetit: It looks like Peggy may have bitten off more than she can chew here with Miranda Hart 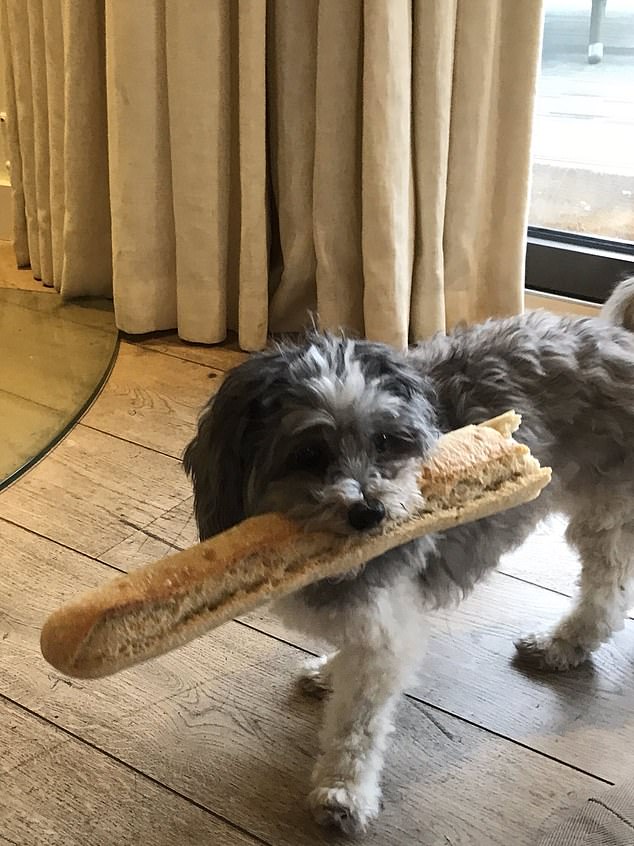 Proper bread-ing: But an enormous baguette for lunch for a tiny pooch really does take the (dog) biscuit 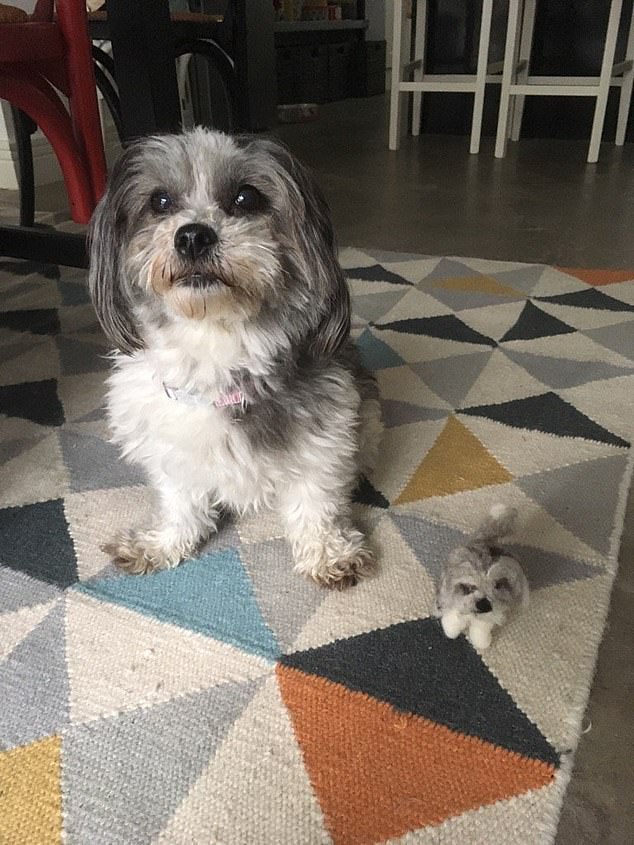 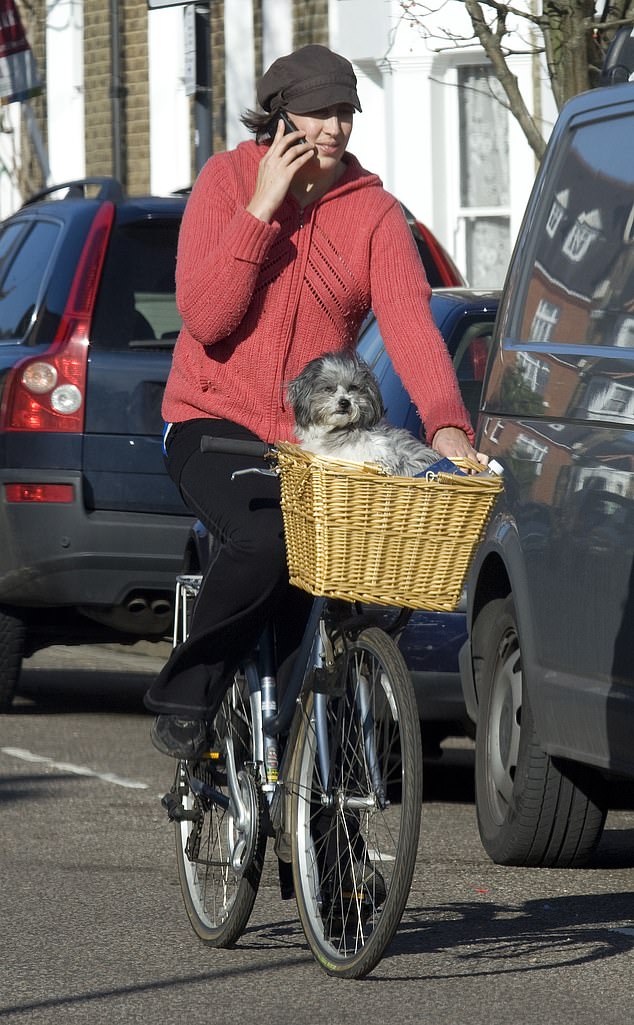 Basket case: Raising the (handle) bar when it comes to travelling in style in Miranda’s bike in west London 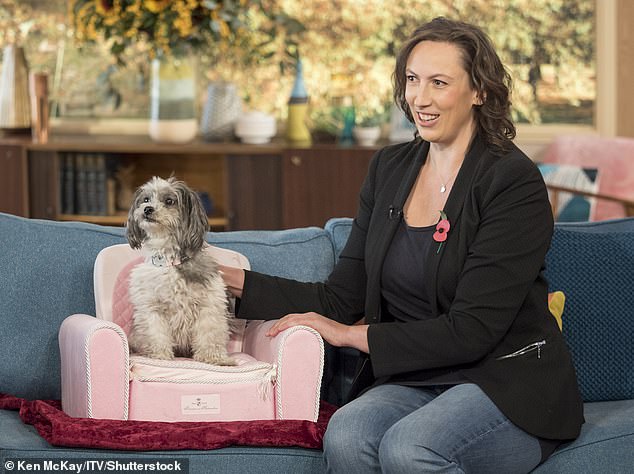 Chair of the dog: A special guest appearance on the This Morning show on ITV in 2016 definitely deserves a bone — sorry, throne — for this little princess 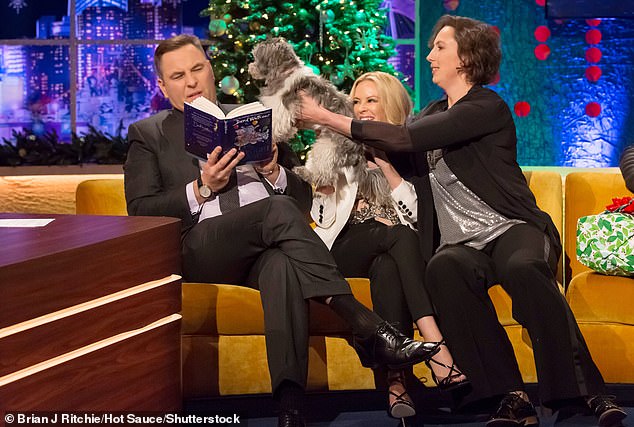 Did you say cat show? With fellow celebrities David Walliams and Kylie Minogue on Jonathan Ross’s Christmas chat show in 2016 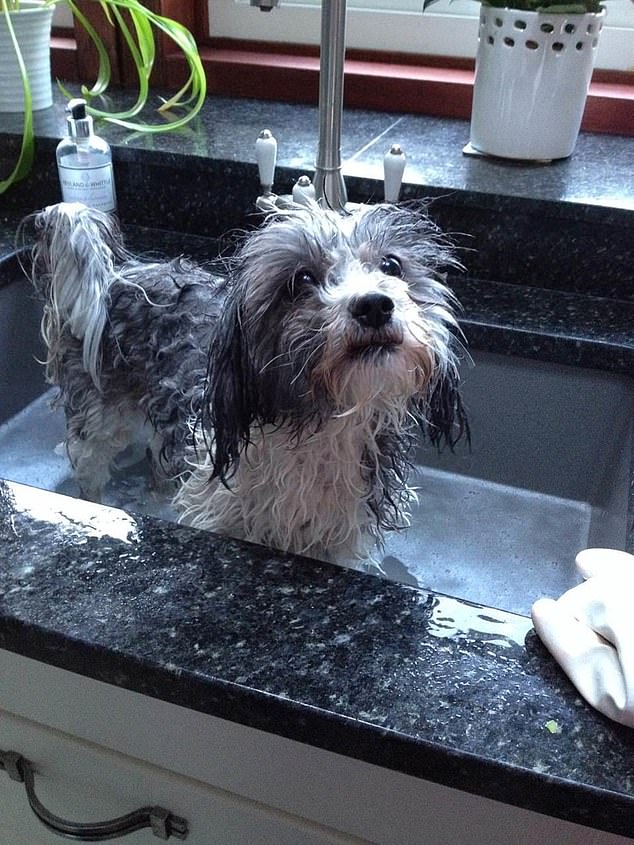 That sinking feeling: Fur the love of God, having a bath in the wash basin is so undignified for such a major canine talent