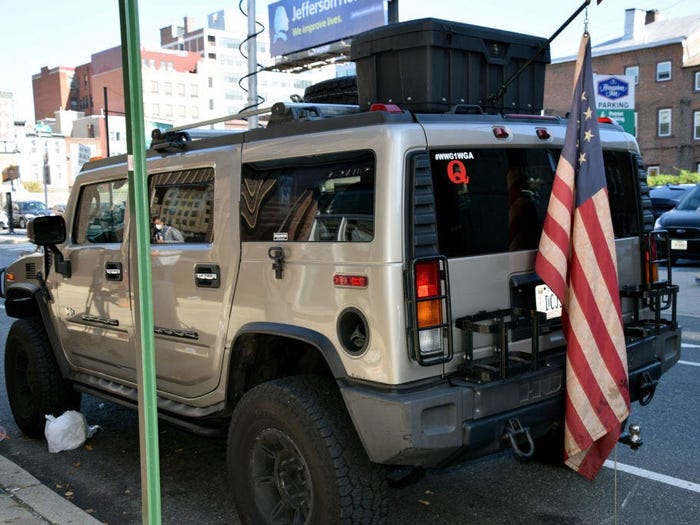 Philadelphia District Attorney Larry Krasner said in a press release on Friday that the two men, Joshua Macias and Antonio Lamotta, had parked their Hummer outside the Philadelphia Convention Center, where election officials continued counting ballots in the days after the election.

Numerous viral tweets showed the truck adorned with a QAnon sticker and an American flag, and a QAnon hat visible through the windshield. The vehicle also had a "WWG1WGA" sticker on its back windshield, which stands for the movement's slogan, "Where we go one, we go all."

Krasner confirmed at a Friday press conference that the vehicle belonged to the two men, NBC News reported.

Krasner said in the press release that despite the "alarming incident," there have been "no reported incidents of violence related to the election" in Philadelphia.

"At this time we do not have indications that the story is bigger than these two individuals," Krasner said in Friday's press conference, according to NPR's local affiliate in Philadelphia. Krasner added that the investigation "may turn out to be nothing more than two people deciding to come to Philadelphia at a particular time for a somewhat unknown purpose."

A spokesperson for the District Attorney's office told Insider that they had no additional comment, but that this "remains a highly active investigation."

Philadelphia authorities were alerted to the truck by the FBI field office in Norfolk, Virginia, which had received a tip about the men, Philadelphia Police Commissioner Danielle Outlaw said at Friday's press conference.

Believers in QAnon, the baseless far-right conspiracy theory alleging President Donald Trump is fighting a "deep state" cabal of human traffickers, have been spotted at nationwide protests against President-elect Joe Biden's projected win. As President Trump continues to spread misinformation related to the election, his supporters have taken to battleground cities to protest. QAnon supporters have been protesting alongside other armed extremists, Christopher Mathias of HuffPost reported.

QAnon supporters have been linked to several incidents of violence since the conspiracy theory's creation in 2017 and the FBI warned in 2019 that the group could pose a domestic terrorism threat.