A federal appeals court ruled that a panel of judges was wrong to take up a Trump appeal and dismiss the case. Trump plans to appeal to the Supreme Court. 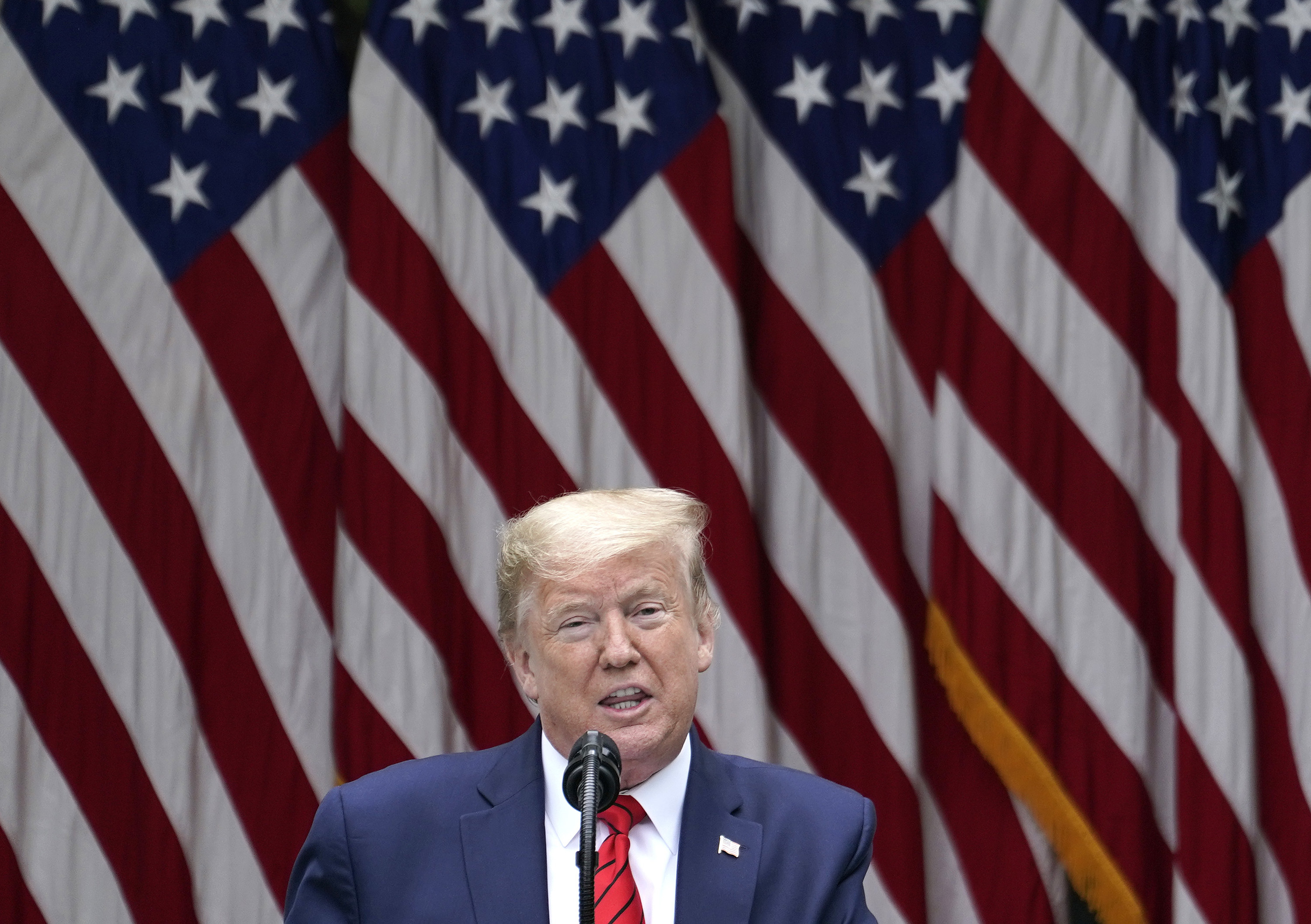 WASHINGTON — Nearly three years after local officials in Washington, DC, and Maryland first sued to stop President Donald Trump from profiting from his businesses while in office, a federal appeals court on Thursday revived the case.

Last summer, a three-judge panel of the US Court of Appeals for the 4th Circuit sided with Trump and dismissed the case. On Thursday, a majority of the full 4th Circuit bench ruled that their colleagues made a mistake in hearing that appeal at all.

Thursday’s decision — spread out over two opinions that addressed different issues raised by Trump on appeal — doesn’t resolve whether Trump is, in fact, violating what are known as the emoluments clauses of the US Constitution by refusing to divest his financial interests in his companies while in office. It’s about when an appeals court has authority to hear a case while it’s still pending in a lower court and before there’s a final ruling by a district court judge.

The 4th Circuit also held that federal courts, as a general rule, did have the authority to consider a case challenging whether a president had violated the Constitution’s prohibition on public officials accepting financial benefits known as “emoluments.” Judge Diana Gribbon Motz wrote that the fact that the president had to obey the US Constitution didn’t mean that his compliance was a special official duty that a court couldn’t get involved in.

Trump’s personal attorney Jay Sekulow said in a statement that they would ask the US Supreme Court to intervene.

“We disagree with the decision of the Fourth Circuit. This case is another example of Presidential harassment. We will be seeking review at the Supreme Court,” Sekulow said.

The 4th Circuit’s rulings mean that two of the three lawsuits accusing Trump of violating the emoluments clauses are still active. Last fall, the 2nd Circuit revived a case raising similar claims in federal court in New York filed by hotel and restaurant owners, as well as the government watchdog group Citizens for Responsibility and Ethics in Washington. Trump has asked the full 2nd Circuit to reconsider that decision, and the court hasn’t announced what it’ll do yet.

The third case, filed by Democrats in Congress, was dismissed by the DC Circuit in February. The lawmakers who brought that case didn’t ask the full court to reconsider that decision — the three-judge panel ruled that they lacked standing to bring it. Democrats could still ask the Supreme Court to take up the case, but they haven’t to date.

DC Attorney General Karl Racine and Maryland Attorney General Brian Frosh, along with CREW, are arguing that when foreign, state, or local officials patronize the Trump International Hotel in downtown Washington, the president profits and receives a prohibited “emolument.”

There are two emoluments clauses in the US Constitution that are at issue in DC and Maryland’s case — one that bars public officials from accepting things of value from foreign governments, and one that applies to emoluments from federal, state, and local governments. The word “emolument” is generally defined as a financial benefit, but that definition has been one of the major issues in dispute in all of the cases against Trump.

Trump appealed to the 4th Circuit after US District Judge Peter Messitte, who sits in Greenbelt, Maryland, rejected the president’s efforts to get the case dismissed and gave officials in DC and Maryland the green light to demand documents and other evidence from the president and his companies.

A judge’s order denying dismissal of a case at an early stage normally isn’t appealable — appeals courts prefer to wait until there’s a final decision on the merits of a case — and Messitte denied Trump’s request to approve such an appeal. Trump went to the 4th Circuit arguing that the case presented extraordinary circumstances that made an appeal appropriate. Last July, a three-judge panel agreed with Trump, ruling that the case could be appealed. The panel then dismissed the lawsuit, finding that DC and Maryland lacked standing to file it in the first place.

On Thursday, however, Motz wrote in a 9-6 opinion that the panel got it wrong, and that Trump failed to show that Messitte had gone beyond his legal authority in denying Trump’s request to approve an appeal midway through the litigation. Messitte had issued a “detailed written opinion that applied the correct legal standards,” Motz wrote, and Trump’s “vigorous” disagreement with Messitte’s decision wasn’t enough to get him to an appeal now.

Motz wrote that Trump also failed to show that it was “clear and indisputable” that the case should be dismissed at this stage of the litigation. DC and Maryland were pursuing “novel claims,” Motz acknowledged, but she wrote that “reasonable jurists can disagree in good faith on the merits of these claims,” which meant that the underlying litigation before Messitte should go forward.

The majority of the court rejected Trump’s other argument that the case should be dismissed because it would subject him, as president, to “intrusive” demands for information that violated the Constitution’s separation of powers principles. But Motz wrote that DC and Maryland wanted business records that had nothing to do with Trump’s duties as president. The court also held that federal courts had the power to review allegations that a president violated the emoluments clauses.

“The Framers, concerned about the corrosive effect of power and animated by fears of unduly blending government powers, dispersed the authority to enforce the law and the authority to interpret it. To hold otherwise would mean that the President alone has the ultimate authority to interpret what the Constitution means,” Motz wrote. “Allowing the President to be the final arbiter of both the interpretation and enforcement of the law — as the dissents would — would gravely offend separation of powers.”

Judge J. Harvie Wilkinson III wrote in a dissenting opinion that the majority “had sorely overstepped its proper bounds” by allowing the case to go forward. He was joined by Trump’s three appointees to the 4th Circuit — Judges Julius Richardson, A. Marvin Quattlebaum III, and Allison Rushing — and Judges Paul Niemeyer and G. Steven Agee.

“The majority is using a wholly novel and nakedly political cause of action to pave the path for a litigative assault upon this and future Presidents and for an ascendant judicial supervisory role over Presidential action,” Wilkinson wrote.

As long as the appeals court was unwilling to dismiss the case, Niemeyer wrote in his own dissenting opinion, “I can only hope and expect that the Supreme Court will do so under its well-established jurisprudence.”

The court issued a second, shorter opinion on Thursday that addressed whether the 4th Circuit had authority to take up a separate issue on appeal — whether Trump enjoyed “absolute immunity” from claims filed against him in his “individual capacity.”

Trump argued that Messitte’s order was, in effect, a rejection of the immunity argument, and that gave him the ability to take the case to the appeals court. Last July, the three-judge panel agreed with Trump. On Thursday, Motz, again writing for the majority of the court in a 9-6 decision, ruled that the panel was wrong — Messitte had said he would get to Trump’s arguments, and the fact that seven months had passed while Messitte dealt with other issues in the case wasn’t proof of “an unreasonable delay or a desire to needlessly prolong this litigation,” she wrote.

Niemeyer wrote a dissent that defended the panel’s earlier decision. He was joined by Quattlebaum and Rushing, two of the court’s Trump appointees, as well as Wilkinson and Agee. Richardson, also a Trump appointee, wrote that he would agree with Trump that the president was “absolutely immune” against being sued as an individual over issues related to his official duties.