As a national royal commission into the summer of bushfires begins, people who live in the fire zones say the fight against the coronavirus pandemic has shifted governments' attention away from relief efforts.

Some say that months after the fires swept through they have given up hope of receiving relief with payments delayed and dealing with government agencies "slow and confusing". 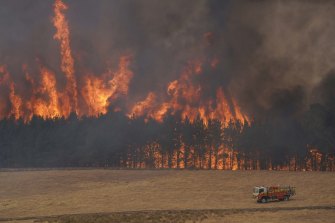 A fire in the Alpine region last summer, when bushfires ravaged the east of the state.Credit:Eddie Jim

The inquiry, launched by the federal government, will investigate the devastating blazes that killed 33 people and destroyed more than 3000 homes across Australia.

Victoria's Inspector-General for Emergency Management has already begun a review of the state’s handling of the bushfires that ravaged the east of the state, where about 1.2 million hectares were burnt.

The federal and state inquiries will look into the disaster response efforts of fire agencies and examine governments’ preparedness for increasingly intense bushfire seasons.

In the early part of this year, locals in Victoria and NSW criticised the speed at which financial relief was being provided to businesses and individuals who either had their property damaged or revenue reduced.

In Mallacoota, which became the international face of the country's Black Summer, publican Lou Battel said many businesses have given up trying to get relief payments due to delays and difficulty dealing with government agencies.

Both the publican and a Gippsland mayor say federal and state agencies have reduced their focus on bushfire relief due to added workload and the demands of responding to the pandemic.

Mr Battel said a Victorian government department staffer had told him his department was struggling to manage bushfire relief while simultaneously dealing with the public health crisis. 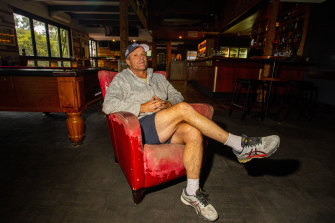 Mr Battel applied for the Victorian government’s $10,000 bushfire recovery grant because he laid off all but six of his 30 staff. Yet months later, his application has still not been processed.

“The government has made it really hard – it’s bureaucratic, slow and confusing,” he said.

“A lot of businesses around here have just given up on it. I’ve persevered reluctantly but I’ve yet to see any money and it’s bloody April.”

Wellington Shire mayor Alan Hall said some businesses in his shire, which had been badly affected by a drop in tourism in East Gippsland, had received concessional loans from the state government. But he said recovery efforts appeared to be stunted by the pandemic. 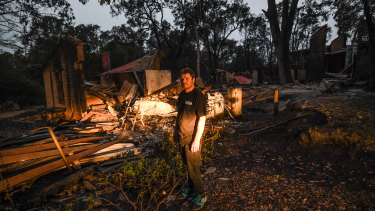 Russell Marriott in front of his burnt out home two days after the fire in Mallacoota.Credit:Justin McManus

He was assisted by charities such as St Vincent's and the Salvation Army, and said state government departments were well-received when they visited the town in the wake of the fires.

“You don’t expect for them to just throw money at people and give it away,” he said.

“It’s been a long and arduous process for some people but [the government] has really been quite good in this ordeal.”