It’s sad to say it, but the masochistic ritual of the daily press conference has become one of the last remaining communal events for a locked-down society.

Sure, we all watch it alone, in our custom-made COVID cubicles, but at least we are all doing it at the same time.

It is the closest we will come to collective experience for a good long while. 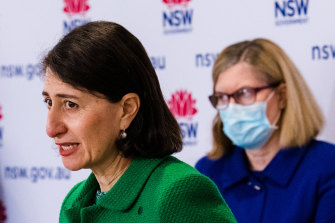 Watching the 11am press conferences is our one remaining communal act.Credit:James Brickwood

We’re all in this together? Like hell we are – the population has sub-divided into so many interest groups that we are practically pulverised.

There are the childcare parents, the homeschooling parents, the DIY enthusiasts and the Bunnings-is-bad brigade.

There are mental health experts and epidemiologists, and even the epidemiologists are Balkanised to the extent where you can choose the one that suits your politics, and your level of risk aversion.

Speaking of politics, thank god we have politicians at whom to direct our rage.

It helps that they deserve it.

No fig-leaf defence can hide the fact that our federal government made grave errors in the vaccine procurement and rollout.

There will almost certainly be an inquiry, perhaps a royal commission, into the handling of the pandemic, and calls for one will grow loud as we move into an election year in 2022.

Attempts by Scott Morrison to boost morale have been so audacious you almost have to admire his cheek.

The other week he tried desperately to link himself to our Olympians (all of whom should be given, well, medals, for morale-boosting), by telling us to “go for gold” in our vaccine run. 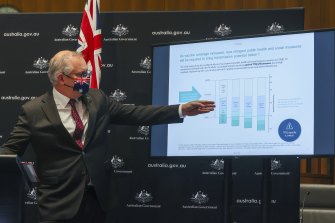 This week Morrison pivoted from pandemic politics to his safe place: refugee policy.

Afghanistan is burning, and girls there will soon be marched out of schools at gunpoint.

But god knows Australia has to be very careful about whom we let in from the country our military has spent two decades in, with some war crimes allegedly committed along the way.

This caution extends, by the way, to our citizens overseas, the ones who cannot come home, the ones who may as well burn their passports because they mean nothing.

What kind of country tells its nationals they are not welcome?

The hermit kingdom has nothing on us.

Speaking of North Korea, one doesn’t want to seem over-wrought, but have you noticed how our police have been empowered to a point that is a little frightening?

Some people say that to dob is unAustralian, but actually the tradition is strong in our country – we are a population encouraged to inform on our neighbours if they breach water restrictions in summer.

A plague presents the perfect opportunity to twitch our curtains.

We have never been concerned about using the jackboot – just ask the Aboriginal communities who sit, like unvaccinated ducks, waiting for the virus to come to them, just as other viruses came to their ancestors.

Still, when NSW Premier Gladys Berejiklian openly said she had given police more powers than they asked for, it was a kick in the kidney to anyone with an old-fashioned view that state power should not transgress beyond what is necessary to protect the people.

Then came the news that NSW Police Commissioner Mick Fuller told his officers they won’t be held accountable for wrongly issuing COVID-related fines. He has ordered his cops to put aside community policing and focus on “a strong approach to enforcement”. 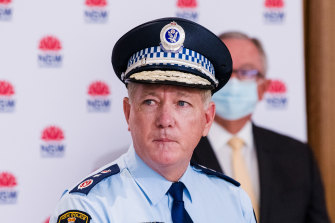 On Friday, the NSW government introduced a 9pm curfew for Sydney’s “hotspot” south-west suburbs, which also happen to be some of its poorest, most densely populated, and most ethnically diverse.

The Premier admitted that “they haven’t demonstrated [curfews] work” but imposed one anyway, on the advice of the cops, a performance of toughness that would be laughable if it weren’t so scary.

Likewise, Berejiklian has admitted there is “no strong evidence about outdoor transmission”, but has still imposed a 5-kilometre radius for exercise, and restricted people in hotspots to one exercise excursion a day.

No prizes for guessing which suburbs the policymakers and most powerful politicians reside in.

At least in Melbourne the curfew applies to everyone equally – in Sydney we make no such pretence, although at least the playgrounds are still open here.

In Melbourne, the joy-police have taped them up.

A slow-dawning grief has settled on us now – the sadness of knowing that COVID-19 is never going away, and even if the worst is over in, say, five years, it will stay as a shadow-presence for our lifetimes.

I dream of swimming in Greece, street-drinking in Paris, temple-climbing in Thailand, with the awe I used to reserve for the stars.

Our expectations are now at basement-level: let’s hope we are all allowed(!) to go to a beach this summer, or see our families for Christmas.

Grief, of course, is many-parts anger, and it’s hard for people to know where to direct the anger, which means it ricochets everywhere.

This tends to ignore the basic premise of a virus – it lives to spread, and the Delta variant has an Olympian capacity for it.

We may as well be cross at our fellow citizens for grabbing some of the oxygen that should be ours to inhale.

But the thing I most lament, is that the more our uncertainty over the future mounts, the more certain and self-righteous we all become in our COVID opinions.

This inflexibility of thought, the refusal to admit to uncertainty, robs us of empathy.

At a political level, it’s dangerous.

Only the stupid have total certitude, and anything too rigid – be it a person or a system – is by definition, unjust.

Stay across the most crucial developments related to the pandemic with the Coronavirus Update. Sign up for the weekly newsletter.