The Australian fritillary looks as ornate as it sounds: a striking black and orange butterfly with a delicate lacework of olive and pink on the undersides of its wings.

Sadly, no one has photographed or taken specimens of the Australian fritillary in two decades (though one was spotted flying near Port Macquarie in NSW in 2015), and so it holds the unenviable title of the “most imperilled” butterfly in Australia. 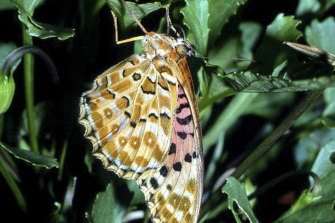 The Australian fritillary is the “most imperilled” Australian butterfly. Credit:Garry Sankowsky

Without strong conservation efforts there is a 95 per cent chance the Australian fritillary will be extinct within two decades, topping a list alongside the gloriously-named “pale imperial hairstreak” of the 26 Australian butterflies at greatest risk of extinction, according to new research published in Austral Entomology.

Each state and the Northern Territory has butterflies that are at risk. In western Victoria and South Australia the yellow sedgeskipper and bright-eyed brown made the list.

In north-east NSW, species include the pale imperial hairstreak and bulloak jewel, while Tasmania has three species at risk, including the Marrawah skipper.

Scientists hope identifying the 26 butterflies will lead to conservation action. Only 10 of the butterflies identified are currently listed for protection under Australian law.

Associate Professor Michael Braby, an entomologist from the Australian National University, said most of the species identified as being at risk had little or no management occurring to conserve them.

“It is vital that we value and conserve Australia’s invertebrate biodiversity – our ecosystems and ultimately our survival may depend on it,” Dr Braby said.

“Every species is important and every species has an ecological function. You can take a few out but if you take too many out the whole system will just collapse.”

There are around 440 species of butterflies in Australia and they perform a number of functions in ecosystems, from recycling nutrients through their waste to providing food to birds and reptiles. 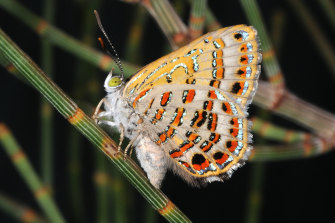 Insects have been experiencing major declines worldwide, and butterflies are no exception.

But it notes the insect species that are declining are generally “specialists” – those that require a particular type of habitat and boost biodiversity – and the species that are increasing include many agricultural pests, of little conservation value.

The major problem facing the Australian fritillary, and many other butterflies, is habitat loss. As swamps have been drained for farming and urbanisation, weeds have smothered the native violets the butterfly lays its eggs on. 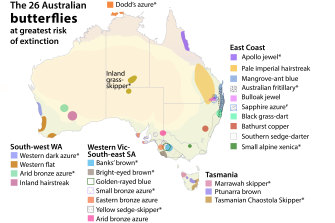 Most of these butterfly species occur across a mix of land types, including conservation, public and private land. In most cases conservation reserves are not enough to ensure their long-term survival.

The study was co-ordinated by the Threatened Species Recovery Hub, part of the Australian government’s national environmental science program.

Amateur lepidopterists can use the free Butterflies Australia app to look up photos and information about the species near them, and become citizen scientists by recording sightings.

Most Viewed in Environment