Bill Gates was all smiles on Thursday as he arrived in New York City just days before his daughter Jennifer’s wedding to professional equestrian Nayel Nassar.

The tech billionaire, 65, was photographed grinning from ear to ear as he exited a private jet ahead of the reported $2 million shindig which is set to take place on Saturday at the Gates family's 124-acre, $16 million horse farm in Westchester County, New York.

Gates and his then-wife, Melinda Gates, bought the North Salem property in 2018 for their 25-year-old daughter after she graduated from Stanford. According to reports, in addition to the farm, they also scooped up a $5 million condo for Jennifer near her campus in Manhattan, where she has been studying to be a doctor.

On Thursday morning, mere hours before Gates would touch down, Jennifer was seen stepping out to run a few pre-wedding errands in New York City.

BILL GATES' DAUGHTER: I WAS BORN INTO PRIVILEGE

Bill Gates and family arrive at a heliport in New York City ahead of his daughter Jennifer’s wedding. (Backgrid)

She dressed casually in a cream turtleneck and coat, jeans, and a mask. A day earlier, Nassar, 30, was spotted walking the couple’s dog around the city as well.

The couple met on the prestigious show-jumping circuit and got engaged in January 2020. At the time, Jennifer shared the news on Instagram, with a photo of the two of them on a ski vacation. "Nayel Nassar, you are one of a kind," she wrote.

"Absolutely swept me off my feet this past weekend, surprising me in the most meaningful location over one of our many shared passions. I can’t wait to spend the rest of our lives learning, growing, laughing and loving together. Yes a million times over," the Stanford grad added.

The celebration of love comes five months after Bill, 65, and Melinda, 57, announced their decision to divorce. The couple was married for over 27 years. 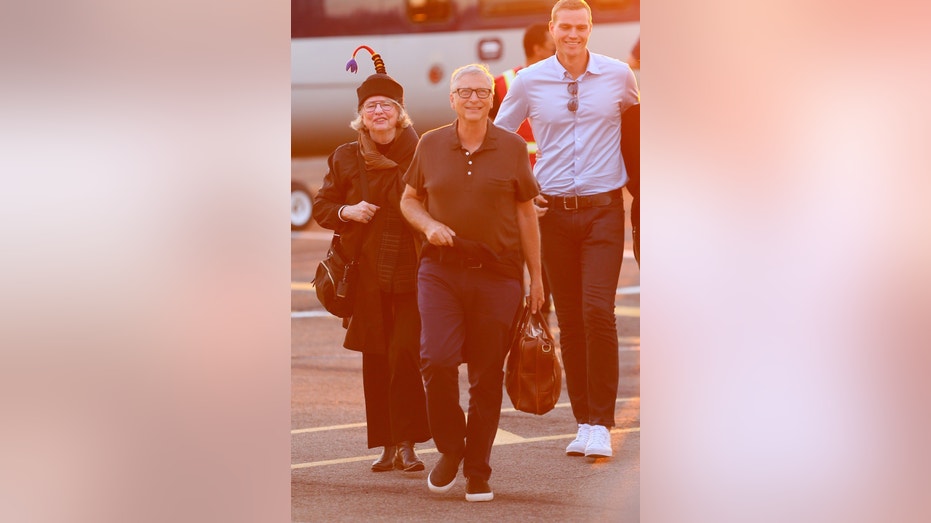 Bill Gates was all smiles on Thursday when he arrived in New York City just days before his daughter Jennifer’s wedding to professional equestrian Nayel Nassar. (Backgrid)

"We have raised three incredible children and built a foundation that works all over the world to enable all people to lead healthy, productive lives," they said in a statement. "We ask for space and privacy for our family as we begin to navigate this new life."

At the time, Jennifer wrote on her Instagram Story regarding her parents' split, "It’s been a challenging stretch of time for my whole family. I’m still learning how to best support my own process and emotions as well as my family members at this time and am grateful for the space to do so."