Being a nomad is a van-tastic life! This year’s Oscar winner portrays the darker side of an itinerant existence, but these footloose Britons love their converted campers so much they’ve become home sweet home

With hotels closed, holidays abroad postponed and a year of on-off lockdown restrictions, campervan and motorhome sales have boomed as ‘staycations’ have become the norm.

According to the National Caravan Council, there are 225,000 motorhomes in Britain — and sales have tripled since 2000. Earlier this year the Mail reported that in the pandemic sales rose further, with dealers reporting shortages.

But not everyone wants to shell out for a fully kitted out ‘palace on wheels’. Many are opting for a DIY alternative instead.

They are a long way from the ancient, battered vans seen in Nomadland, which swept the Oscars last month and documents the lives of America’s itinerant older workforce. These British ‘nomads’ have snapped up former delivery vans and converted them into travelling homes offering mod-cons from luxury kitchens to king-size beds — even home cinemas.

Some enjoy their converted campers so much they’ve opted to live in them full time, enjoying the freedom to travel and saving huge amounts of money on rent or mortgage payments.

As working remotely via a laptop has become the Covid-norm, the ‘digital nomads’ are setting up office wherever they fancy, with many raving about their new-found freedom in online communities celebrating ‘van life’.

So, is life on the road glamp-tastic or hell on wheels? JILL FOSTER and DAVID LEAFE speak to four lifestyle converts to find out . . .

We loved driving off to the alps

Freelance sculptor Sian Fahie, 30, lives with her partner Adam Devonish, 32, who runs a cleaning business. For the past year they have been living with their dog Maple, a two-year-old Hungarian Vizsla, in a converted Citroen Relay van.

‘We are both outdoorsy people who grew up camping and about four years ago we bought a VW Transporter that had already been converted,’ says Sian. ‘We were originally living in Essex but loved going away in it so much that it made sense to move to Dorset, which is where we went most weekends anyway, and then we started talking about living in a van full time.

‘I was having a difficult time at work, so going freelance appealed, and Adam could run his business remotely so we decided to go for it. 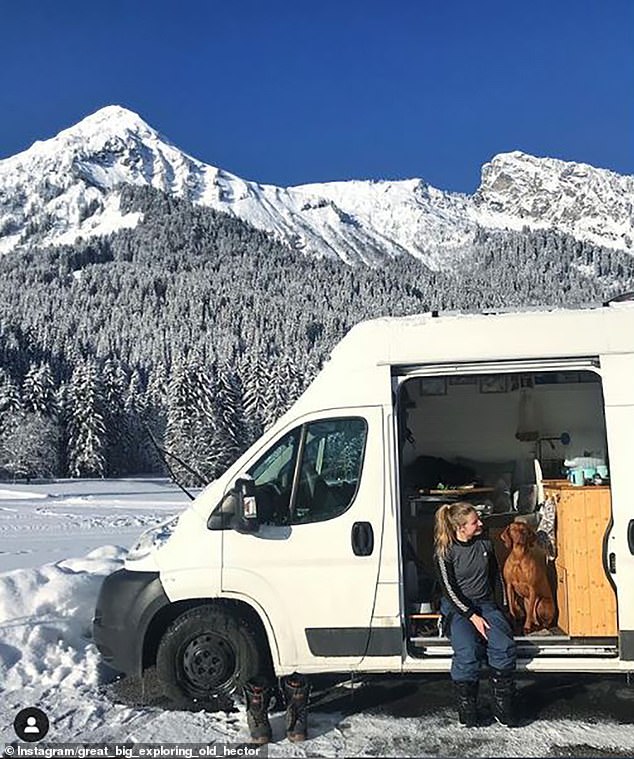 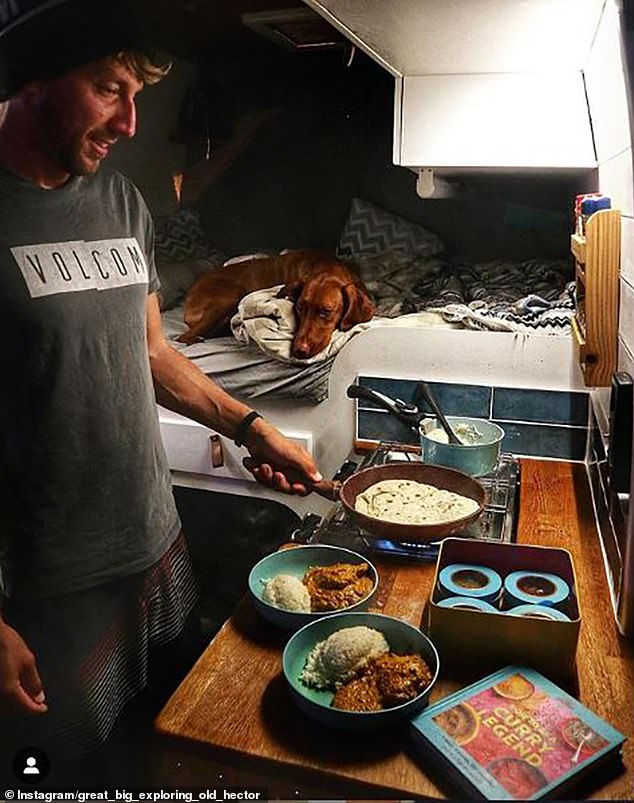 Adam (pictured) is 6ft 2in and said that if they were going to live in a van full-time, they had to get something larger. Their Citroen Relay is big enough for him to stand up in

‘Adam always said that if we were going to live in a van full-time, we had to get something larger because he is 6 ft 2 in. So we bought a Citroen Relay which is big enough for him to stand up in.

‘Adam has a carpentry background so we did the conversion ourselves and moved in in March last year, just as Boris announced the first lockdown. For the first few months we were parked at Adam’s parents’ house in Essex but last July we set off around the Alps, going mountaineering, climbing and down to the coast as well.

‘Our heater has a SIM card so on the way back from snowboarding we’d text it to switch on so we could get back and have a cup of tea in the warm.

‘An absolute win has been the projector, which was a last-minute purchase. You can watch things from the bed, the lounge and outside.

‘We spent last winter in France, taking extra jobs in ski chalets. We’re now back at Adam’s parents but can’t wait to go back to France soon.’

Our pet cat travels the world with us

Bee Roper, 32, and Theo Gove-Humphries, 32, are both film-makers and have their own YouTube channel. They have been living in their Mercedes Sprinter with their pet cat Ginjey Bear for the past seven years.

Bee says: ‘In 2014 we were living in a one-bedroom flat in Birmingham, working full-time, paying £600 a month rent, saving towards buying a house but not really enjoying it.

‘Then Theo announced, “We’re buying a van!” And that was it. We installed solid-oak kitchen worktops, a reclaimed antique dresser and even a refillable petrol-powered oven. 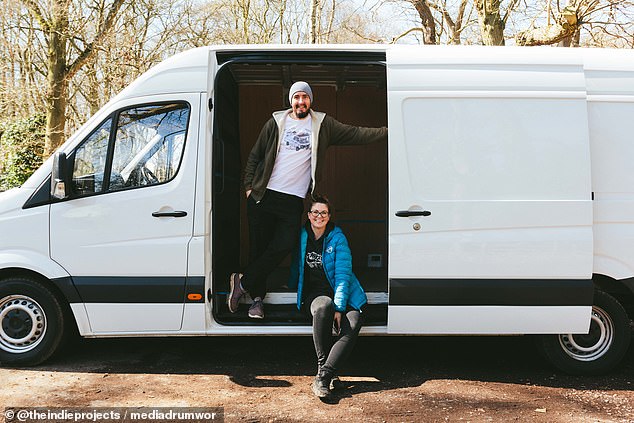 Bee Roper, 32, and Theo Gove-Humphries, 32, who are both film-makers and have their own YouTube channel, have been living in their Mercedes Sprinter with their pet cat Ginjey Bear for the past seven years 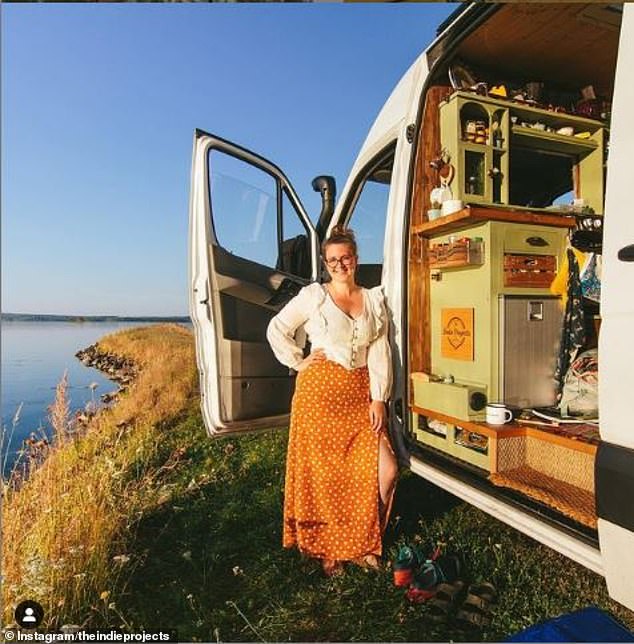 In 2014, Bee and Theo were were living in a one-bedroom flat in Birmingham and saving for a house, but not really enjoying it – so they bought a van 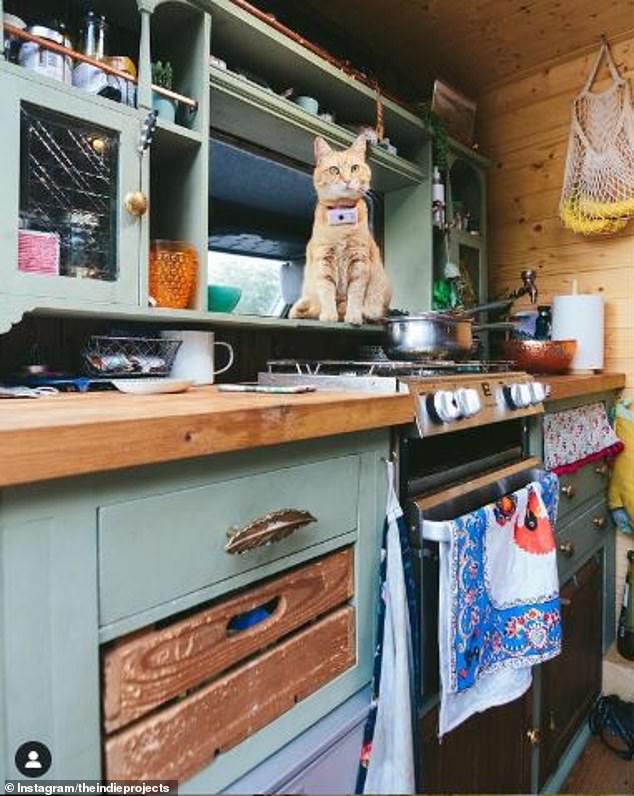 In their van, they have so far travelled through 27 countries including France, Germany, Latvia, Estonia, Poland, Romania and Hungary as well as Slovenia and Norway

‘So far, we’ve travelled through 27 countries including France, Germany, Latvia, Estonia, Poland, Romania and Hungary. Norway took our breath away, and Slovenia was a particular gem.

‘We were stuck in the UK for the first lockdown but managed to get out to Portugal once restrictions eased last summer and we’ve been here ever since.’

We’ve escaped the rat race in our DIY motorhome

Freelance nutritionist Lara Baudains, 27, is ‘van lifing’ with her 29-year-old fiancé Charlie Skinner, an account manager for a software company. The couple have recently finished converting their van and have been experimenting with living and working in it on short trips around the UK, sleeping parked up in the driveway of Charlie’s parents’ home in Dorset.

‘Our family and friends thought we were crazy at first but since seeing what we’ve done with the van they’ve been excited for us,’ Lara says.

‘The idea came about because we were living in London and dying to get out of the rat race. We’d given up our flat and were planning to move to Vancouver when the pandemic happened. We’d talked about converting a van and it took weeks to find the right one. Prices have gone through the roof because of the movement towards converting them. 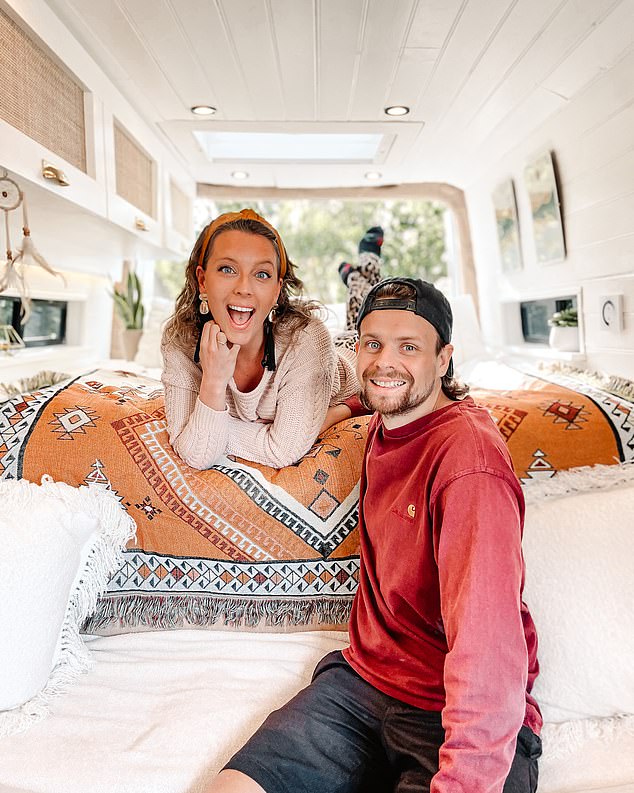 Lara Baudains, 27, and her 29-year-old fiancé Charlie Skinner have recently finished converting their van and have been experimenting with living and working in it on short trips around the UK, sleeping parked up in the driveway of Charlie’s parents’ home in Dorset 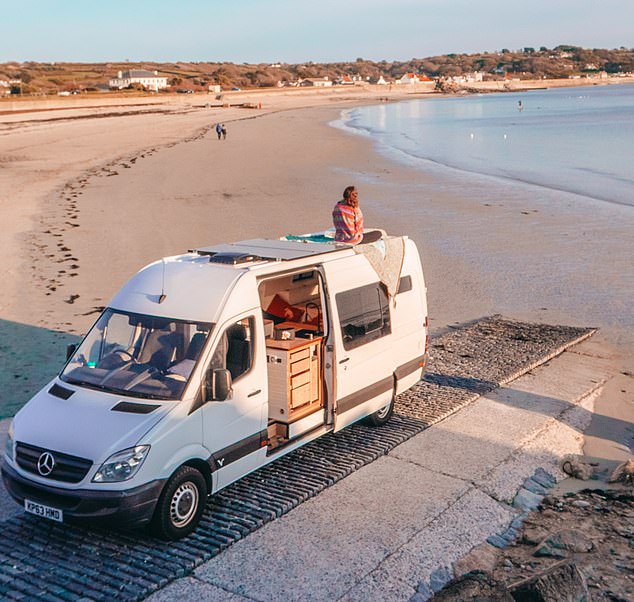 ‘We found a Mercedes-Benz Sprinter for £10,000 and it has cost the same again to convert it. Neither of us had any experience of DIY but we did it with the help of YouTube videos.

‘With different jobs and sleeping patterns, you have to be really aware of the noise you make moving around the van, but the good thing is that you have the open space outside and everywhere is your garden.’

The orange van had 140k miles on clock!

Courtney Stevens, 27, a communications manager, and James Mechan, 32, a digital marketing executive. The couple, who have been together for six years, live in a Mercedes-Benz Sprinter.

‘James and I had lived in rented houses since we graduated from university and were getting tired of having to move every 12 to 18 months,’ says Courtney.

‘We wanted to have more financial freedom and the ability to travel so we could save for the future and retirement. 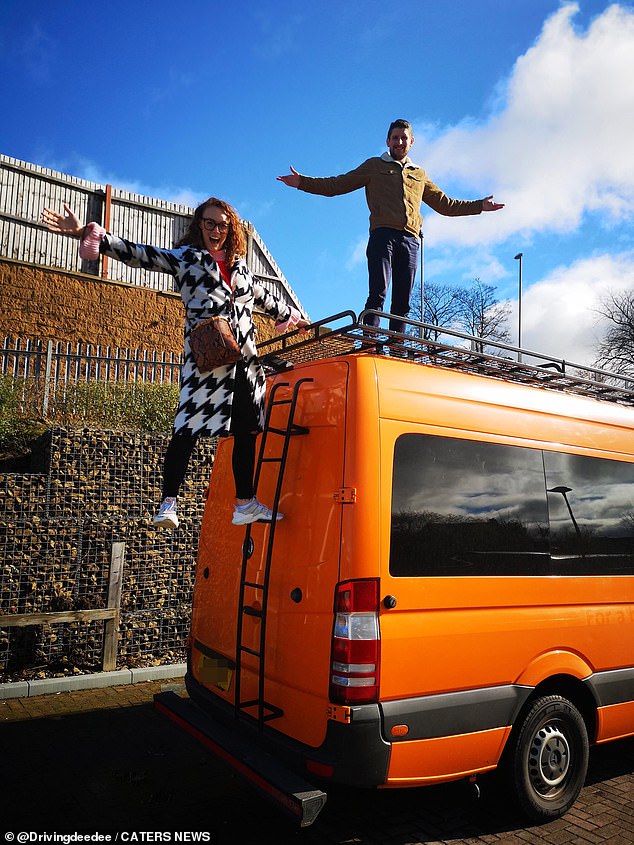 Courtney Stevens, 27, a communications manager, and James Mechan, 32, a digital marketing executive, have been together for six years and live in a Mercedes-Benz Sprinter 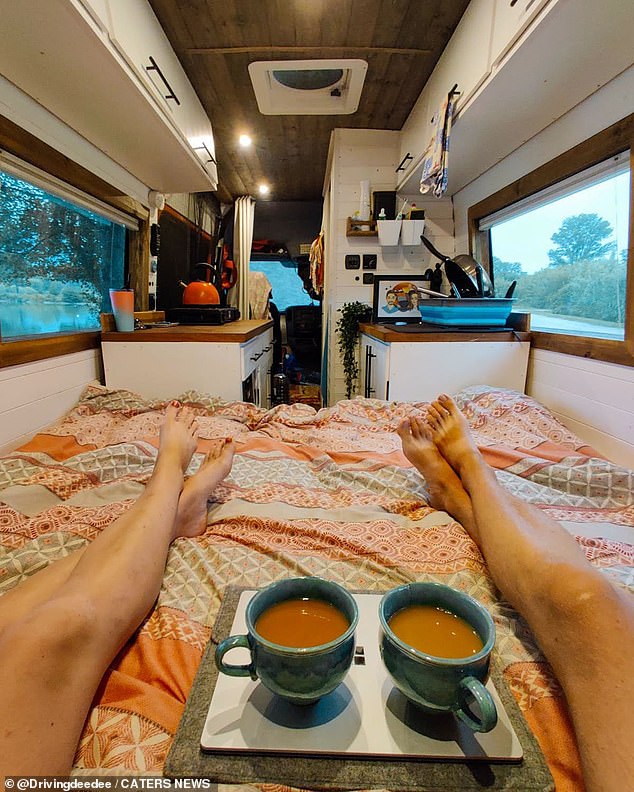 They had no experience in DIY, but studied YouTube videos and joined Facebook groups for advise so they could do the van up. As it was going to be their home, they were prepared to spend the equivalent of a house deposit on it

‘We call the van DeeDee and she’s bright orange, seven metres long and three metres high with an off-grid solar and water system, a shower, heating and a king-size bed.

‘During the first wave of the pandemic we were in Spain living under strict lockdown rules.

‘We returned to the UK in November and decided to spend lockdown renovating the van. We ripped out the interior and started over.

‘We are now travelling the North Yorkshire Moors until we get our vaccines. We are hoping to get some winter sun in Bulgaria and Greece if all is safe.’