Indeed, the gems presented during a two-day event here are undoubtedly magnificent, and Bulgari dubbed the lineup as the most precious haute joaillerie collection it has ever presented.

A stunning spinel exemplifies this claim. Hailing from Tajikistan, and weighing 131.21 carats, it is the fourth largest spinel in terms of carat weight in the world but “the most beautiful in terms of quality,” according to jewelry creation and gem buying director Lucia Silvestri. Mounted in the Imperial Spinel necklace, the gem is surrounded by a cascade of diamonds and emerald beads, in a bold color combination of green and hot pink tones. Despite the large size of the spinel, the necklace is very light — a sort of “second skin on your neck,” Silvestri said.

Bulgari chose to unveil the collection in Milan for the first time, after past presentations in Venice, Rome and Capri.

“We always celebrate Italian craftsmanship with these events, but in this case, we also wanted to pay tribute to Milan, which has been so hard hit by the COVID-19 pandemic and fought so hard to recover,” said chief executive officer Jean-Christophe Babin on Thursday. “This is the first major live event in the city and we want to help it restart.”

A private concert at La Scala and a dinner at Cracco that evening were to be followed on Friday by a lunch event at the Bulgari Hotel.

“Milan is often associated with business, but it is also a symbol of design and we want to help promote it as an artistic and touristic site,” said Babin, noting that two jewelry pieces were inspired by the city’s medieval Castello Sforzesco.

Another first included filming the collection at the luxury shopping arcade Galleria Vittorio Emanuele II, which Babin said had never been used for a jewelry presentation. Given the travel restrictions, the film will help broadcast the collection globally. In addition, the company is planning to bring Magnifica to Asia and Japan in particular this summer; to China in September; to the U.S. in October, and to the Middle East in December.

While Italy has only just recently started to ease its restrictions, international travel is still slow, but Babin said he had met with several European high jewelry customers and a few Americans. The Chinese are increasingly more important but American and European high net worth individuals remain the main customers of high jewelry, he offered, while the upper middle class is emerging more in China and Latin America.

There is an “even stronger focus” on the U.S. for Bulgari now, and in particular on the jewelry and timepieces category in the region. Babin said that through the union of Bulgari and the recently acquired Tiffany & Co., parent company LVMH Moët Hennessy Louis Vuitton has “an advantage and an extraordinary opportunity for market shares in the U.S.” The two brands are complementary, he noted.

“There is a strong appetite for authentic Italian luxury and craftsmanship, for certified and traceable gems and 2021 is increasingly looking similar to 2019,” observed Babin. He touted the resilience of jewelry, “an eternal value, whose prices grow exponentially in time,” and Bulgari’s “unique, rare gems,” noting that the spinel itself was worth 16 million euros. “You can’t go wrong in buying a precious jewel.”

The executive said that, given the restrictions and the impact of the pandemic, there’s much accumulated liquidity and high net worth individuals are willing to invest in those brands that are “bold” and that guarantee “extraordinary gems and craftsmanship.” In addition, he believes that the pandemic has “strengthened the value of authenticity, transparency and ethics” and that customers pivot toward those brands that have built a strong emotional connection throughout the health emergency. Bulgari, as reported, has made donations and invested in research to fight the coronavirus.

The Magnifica collection, which comprises a selection of 350 masterpieces counting 60-plus designs priced in the millions, also celebrates a group of “fearless and revolutionary women, who took bold decisions that changed the course of things at the time,” Silvestri said. 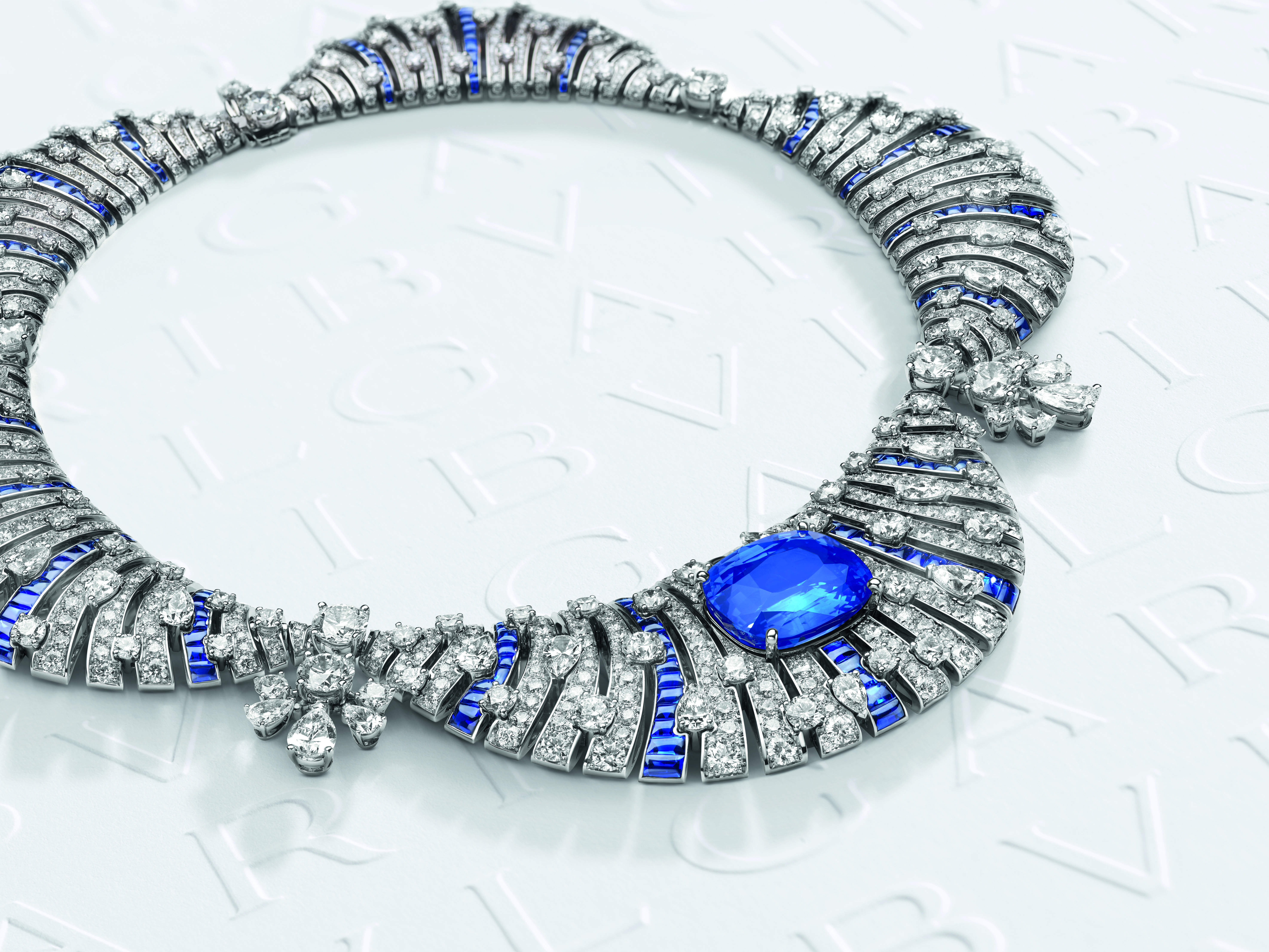 They range from orator Hortensia in Ancient Rome and Maharani of Indore, to Chinese writer Eileen Chang and 17th-century painter Artemisia Gentileschi, who put a new focus on the central role of women in society. The Baroque Spiral necklace “reflects her rebellious spirit,” Silvestri said. The jewel is characterized by a spiral geometry, where cabochon rubies, emeralds, sapphires and diamonds are set one by one at different levels and inclinations in an intricate 3D creation.

Art Deco artist Tamara de Lempicka inspired the drawing of the Bulgari Diamond Swan necklace. Two stylized swan heads, their tiny eyes made of pink diamonds, are surrounded by a triumph of articulated diamond elements, punctuated by mother-of-pearl touches, recreating the birds’ wings. The necklace is matched by a set of earrings.

The Fluid Tanzanite jewel pays tribute to the unique style of Zaha Hadid, who years ago revisited Bulgari’s Bzero.1 design, and the “powerful spirit of a woman that followed her dreams,” Silvestri said. “She was so charismatic and she remains legendary.” In this creation, Bulgari’s tubogas is enriched with pavé-set diamonds on a design inspired by Hadid’s signature use of curves and irregular geometries and a central 77.88-carat tanzanite cabochon.

The Ruby Metamorphosis is a versatile high-jewelry piece that can be worn in at least nine different ways and which required 2,500 hours to be completed. It is composed of detachable pieces, including a diamond choker and a chain. A precious 10.02-carat antique cushion-cut central Mozambique ruby is central to the jewel. There is also a soft silk-like tassel mixing baguette diamonds and cabochon rubies. “It truly is a work of art, hiding a complex, articulated and carefully studied structure that enables to easily transform it,” Silvestri said.

A 93.83-carat cabochon-cut Colombian emerald is placed in the jaws of a snake, “as if it were one of its eggs,” Silvestri said. The Hypnotic Emerald necklace required 1,800 hours to be completed and the snake’s body features pavé-set diamonds, as well as diamond baguettes and emerald cabochons, in an intricate artisanal construction. 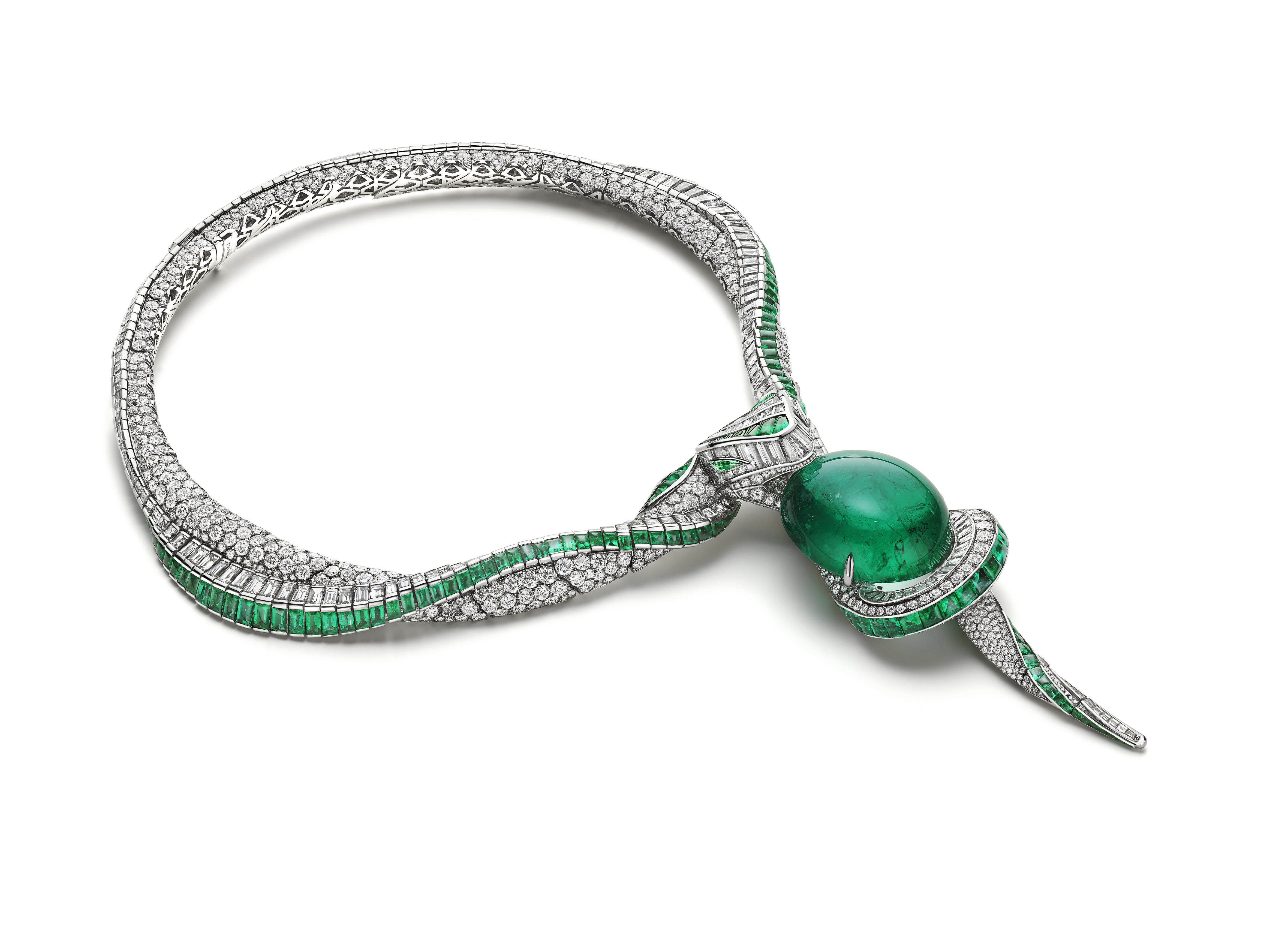 Inspired by a Bulgari necklace dating back to 1969, the Mediterranean Queen stands out with an intricate gold and diamond construction reminiscent of waves, requiring 2,400 hours to be completed. Five oval cushion-cut Paraiba tourmalines in an aqua green color are connected by sinuous, curved elements with cabochon emeralds and diamonds. “It’s like diving into the waters off the Sardinia island,” said Silvestri, who always speaks passionately about her work and that of the artisans creating the jewels.