The entertainment icon jumped on the new platform with a series of looks, wigs and introductions with a “Happy Pride Month” message for her fans.

Some people in life have achieved a level of fame and recognition that they need no introduction. We’d like to think if you’ve reached the point in your career where you are known by one name, you’re probably among that elite group.

Nevertheless, when Cher jumped into the TikTok craze with her very first post on the youth-skewing platform, she decided to introduce herself. But she didn’t stop there. She introduced herself again and again, changing her look each time. 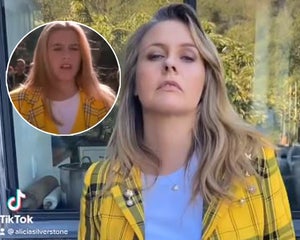 In so many ways, it was classic Cher. She’s been as known for her wild and innovative sense of style and changing looks throughout her decades-long career as she has for her multi-faceted talent that scored her awards for acting and singing and pretty much whatever else she decided to do.

“Hi, it’s me, the great and powerful Cher and I’m on TikTok, she said with a clear nod to “The Wizard of Oz.” And with those words she was off on this wonderful new platform … where she promptly introduced herself again.

By the third introduction, we could hear the person holding the camera starting to giggle, and Cher herself cracked up with the fourth run, deciding that she really didn’t need to introduce herself, after all.

Instead, she paused for a message for all her fans in the LGBTQIA+ community. “Happy Pride Month to everybody in the community that I love, and that means you!” she said with a laugh and a smile.

So far, this is Cher’s only upload on the platform, but she clearly had so much fun doing it, here’s hoping she comes back. Another tragedy? While the clip has 3.4 million views so far, Cher only has only about 463,000 viewers as of this posting. That’s a tragedy that simply cannot be allowed to stand — not during Pride Month!