It’s nearly 15 years since the Melbourne Prize for Literature was first presented. Helen Garner was the inaugural winner of what was then the richest prize for writing in Australia, worth $60,000.

But Garner wasn’t the only big winner that night. Christos Tsiolkas took home the $30,000 prize for best writing by a writer under the age of 40 for his fourth novel, Dead Europe. On the night he said he had worked on the book for seven years and with typical understatement said he felt “a certain happiness that people are responding to it”. 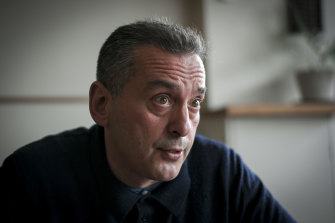 Christos Tsiolkas says the big change since the success of his novel Dead Europe is that he now writes fulltime.Credit:Eddie Jim

A lot has changed since then and Tsiolkas has now been named as a finalist for the big prize, which is given every three years to “a Victorian author whose body of published work has made an outstanding contribution to Australian literature and to cultural and intellectual life”.

If Tsiolkas’ award was given as recognition of the talent of a young writer and encouragement for the future works, then the judges got it right. He followed Dead Europe with one of the definitive novels about life in contemporary Australia, The Slap, and subsequently Barracuda, Damascus, and a short-story collection, Merciless Gods. His latest novel, 7½, will be published in November.

The biggest change for Tsiolkas since 2016 is that he now writes full time. “I was still working at the vet clinic then, which I loved. But after Dead Europe I was able to focus on the craft of being a writer. I feel I’ve been much more confident as a writer and part of that is realising that it is work – not that I don’t love it. Writing is an apprenticeship without an end.“

His most recent novel, Damascus, about the early Christians, had “taken up a large chunk of my years”, he said, and 7½ was a bit more playful, and he had worked largely from instinct.
“I started it in quarantine and was trying to write 1500 words a day as an exercise. But it came out in a big flow. It’s actually about writing.″⁣

This year, the organisers of the triennial prize that in other years acknowledges music and sculpture are introducing a new category, the $20,000 professional development award, which will go to a published author to help fund their career. And a $15,000 prize will again go to the writer of an essay of a maximum 10,000 words that has “outstanding originality, literary merit and creative freshness”.

The Booklist is a weekly newsletter for book lovers from books editor Jason Steger. Get it delivered every Friday.