The federal government has flagged possible changes to childcare payments during lockdowns as thousands of families around Victoria are facing the prospect of being forced to pay fees while their children are unable to attend early learning centres.

The union is warning the early education sector will “crumble” unless the Commonwealth steps in to provide additional funding tied to workers’ wages. 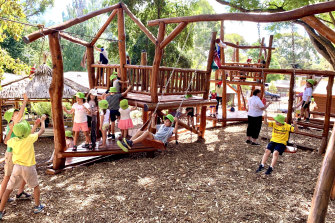 Childcare has been restricted to vulnerable children and children of authorised workers. Credit:

Under new statewide restrictions that will be enforced from 11.59pm Monday, Victorian children will only be allowed to attend childcare or kindergarten if one of their parents is an authorised worker, forcing thousands of families to attempt to juggle work with the demands of looking after young children.

Several childcare centres have told parents they will not waive the gap fee until the federal government provides additional funding, leaving parents out of pocket hundreds of dollars a week for a service they are not allowed to use.

Major early learning centre Guardian Childcare and Education in an email on Sunday afternoon said it had been placed into the “extremely difficult position” of having to choose between charging parents’ gap fees or cutting jobs.

“I don’t want to do either of these things,” chief executive Warren Bright said. “We are committed to keeping our centres open and keeping the educators you and your children love employed, but doing this without federal government support is impossible.

Mr Bright told The Age he was unable to make a decision on fully or partially waiving gap fees until the Commonwealth announced its position, and that Guardian was reviewing the situation daily.

“JobSaver is not enough, we are not eligible and we know of very few early learning providers who are eligible,” Mr Bright said.

“Even with JobSaver, it will not be sufficient if the government wants a viable childcare sector once lockdowns end. We need a support package similar to what was offered last year. The cumulative effects of lockdowns in three states is far more significant than what was experienced with a lockdown in Victoria alone last year.”

Speaking to Sky News on Monday morning, federal Education and Youth Minister Alan Tudge said the government was taking another look at the current structure of the childcare subsidy and support payments for parents.

However, he ruled out any schemes that would be similar to the free childcare program offered at the height of the coronavirus pandemic last year.

“We have a particular model at the moment … and I am taking a look at that particularly in light of Victoria and NSW having issued directives now to not send your child to school, so that’s an ongoing conversation that I’m having with the sector and with the state and territory jurisdictions,” he said.

Families and early learning centres were left in “confusion and bewilderment” at the weekend when Premier Daniel Andrews on Saturday announced childcare would be restricted to vulnerable children and children of authorised workers as the Health Department and Health Minister’s office repeatedly provided contradictory advice to parents.

The union for early learning staff, which last week called for childcare centres to be closed to all but the children of essential workers and vulnerable children to curb the spread of COVID-19, said parents who are unable to access the service should not be forced to pay.

United Workers Union executive director of early education Helen Gibbons said the federal government must boost its funding to early learning centres, and ensure those payments are going to paying and retaining staff.

“Coming out of the enormous lockdown in Victoria we had an early education system that was battered and bruised and we lost a lot of good educators but we survived,” Ms Gibbons said.

“This time around, without additional funding, there will be no proper systems of early education coming out of lockdown. In part, what’s at threat is a loss of workers. There is already a shortage of educators in the sector and if they lose hours or jobs during this lockdown because there’s no funding, they won’t come back.”

Health Minister Martin Foley on Saturday said he could understand the frustration of Victorians due to the latest restrictions, including the tightened access to childcare.

“We can’t take that risk, knowingly to put our kids in harm’s way.”

Stay across the most crucial developments related to the pandemic with the Coronavirus Update. Sign up for the weekly newsletter.