Home side Nice had been winning the hotly-contested Mediterranean derby1-0 as the match was about to enter its closing stages – when Marseille star Payet was struck by a bottle from the crowd. 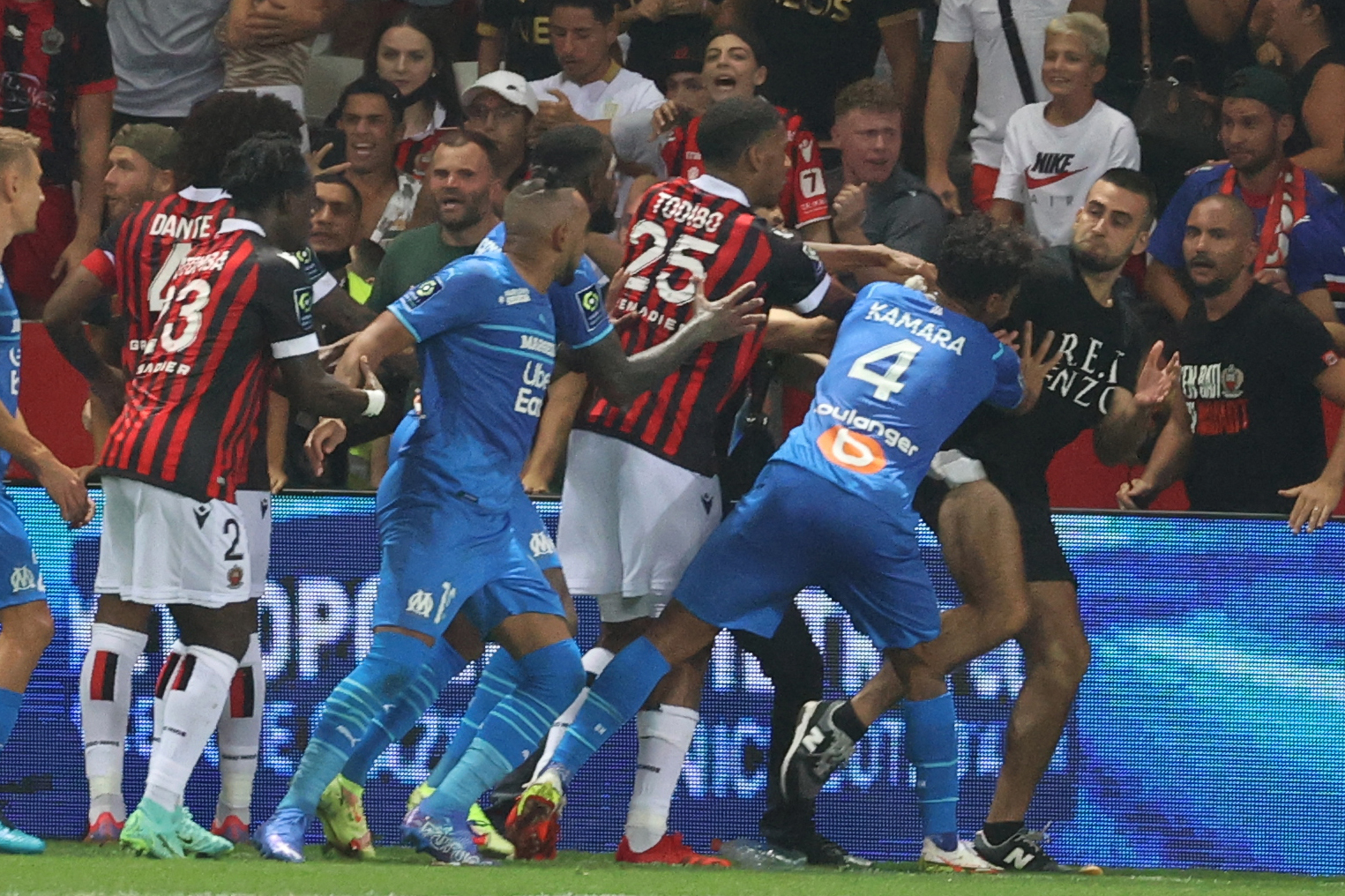 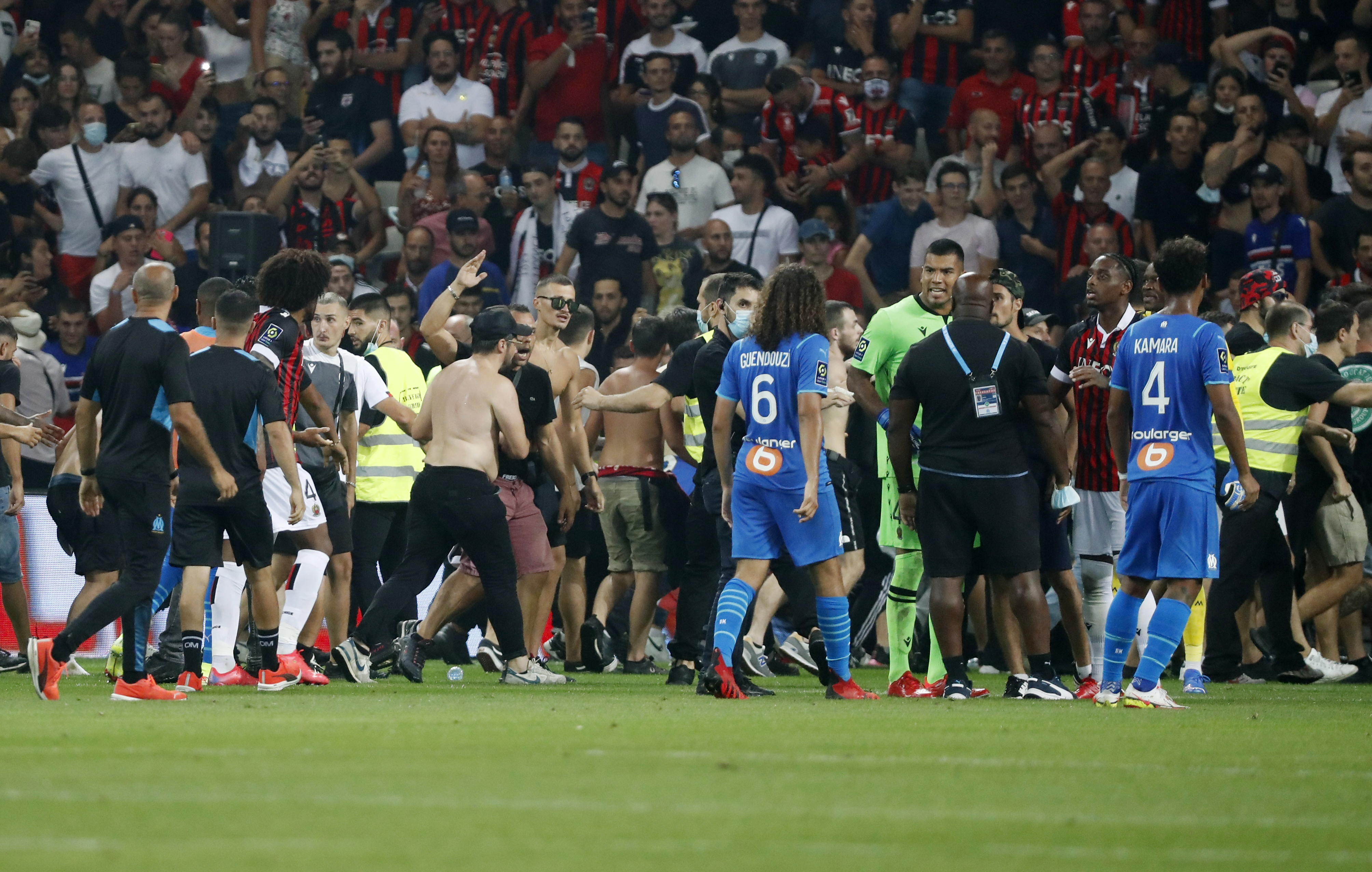 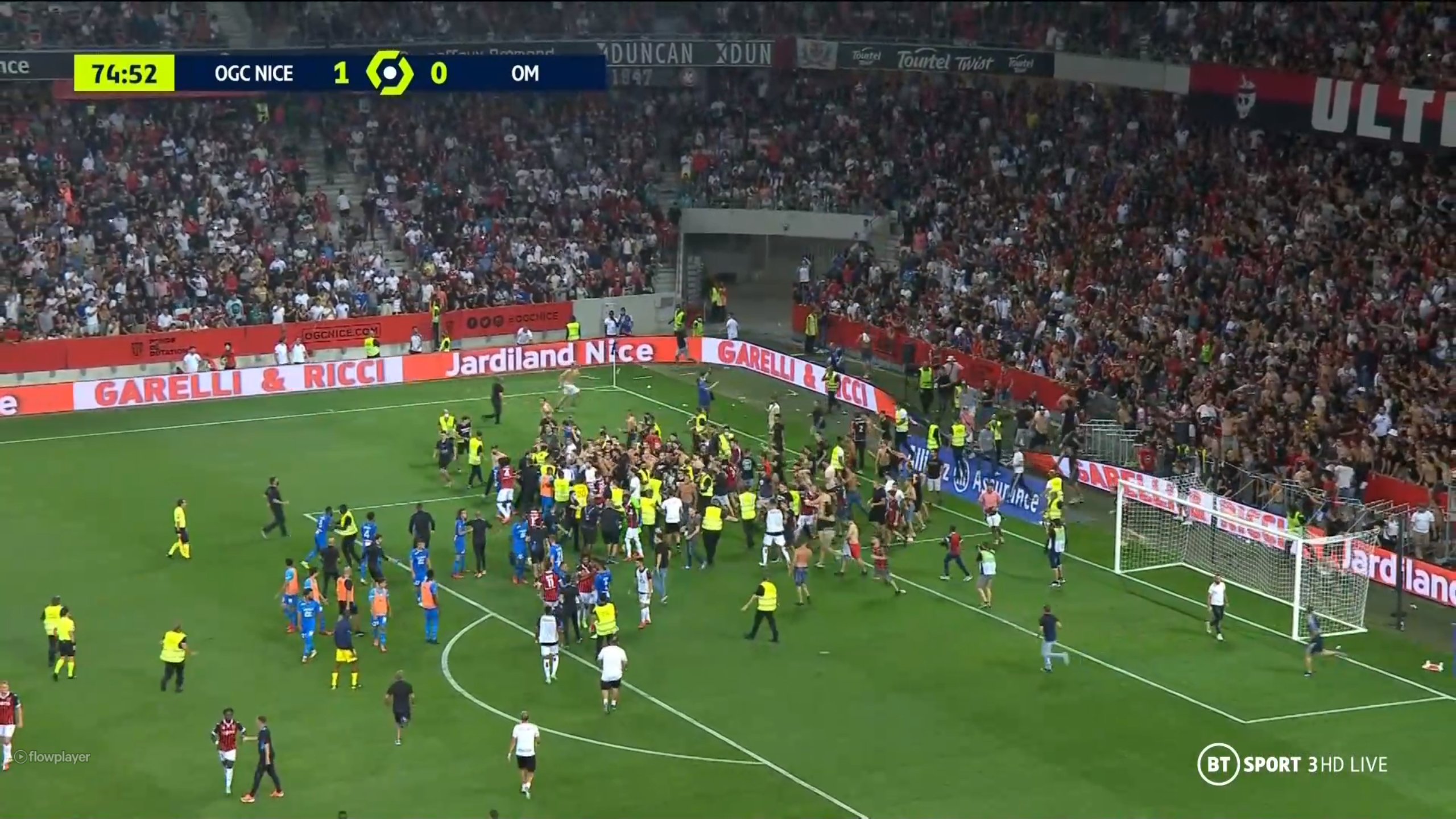 The former West Ham star, 34, responded furiously, launching the bottle back where it came from.

Then all hell broke loose.

Payet's team-mates Alvaro Gonzalez and Arsenal loanee Guendouzi rushed over to back him up, also angrily shouting at the Nice supporters.

That prompted a number of yobs to storm down from the stands, trying to FIGHT Marseille stars.

Nice players and stewards did their best to separate the warring parties.

But with scores of fans having made their way onto the field of play, the referee had no option but to suspend proceedings. 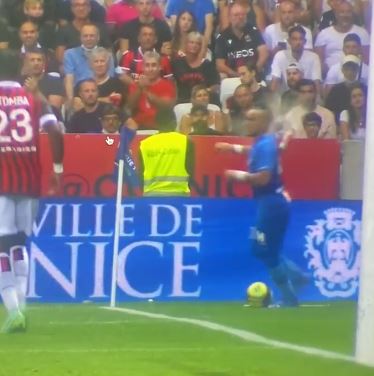 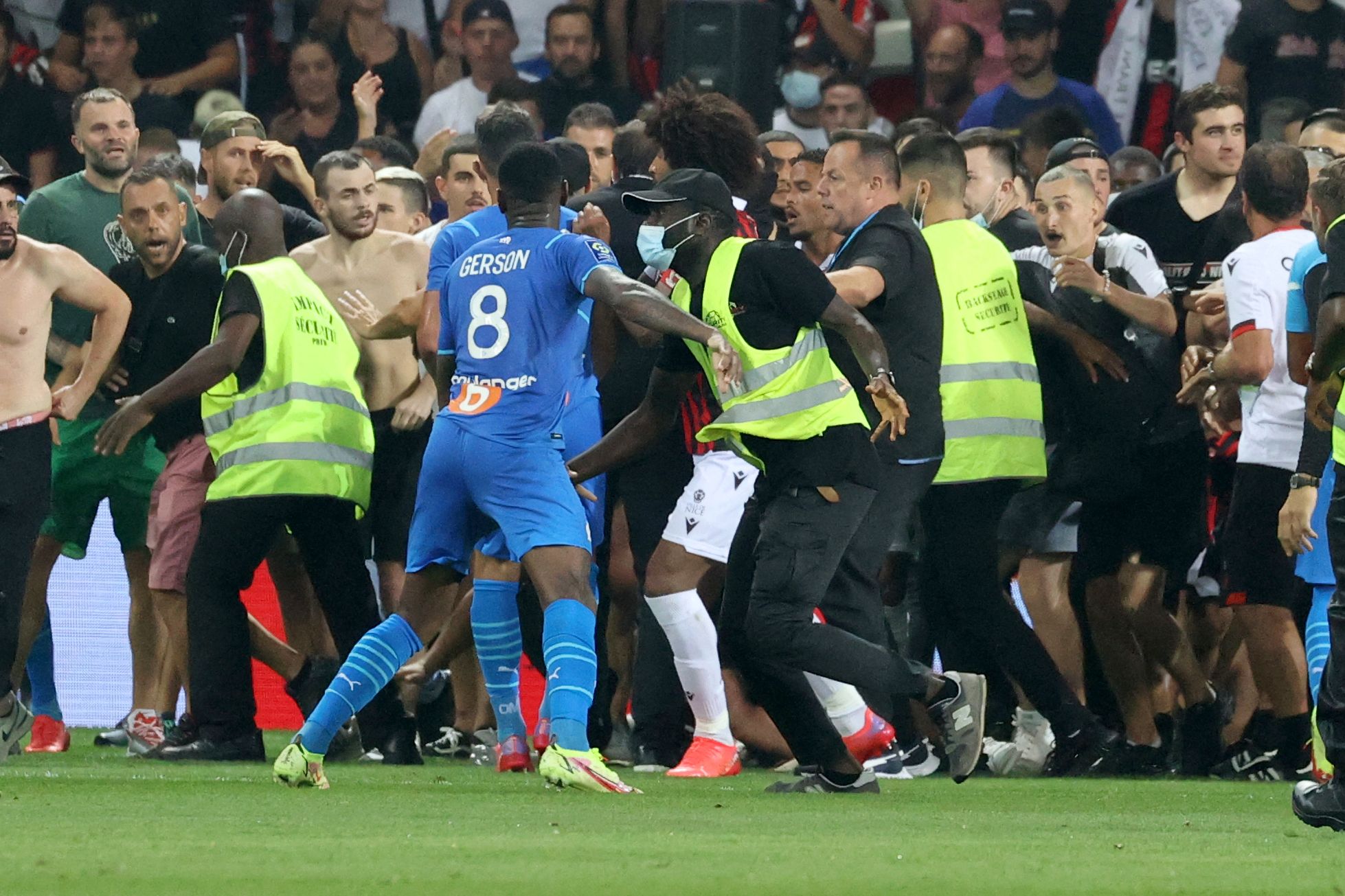 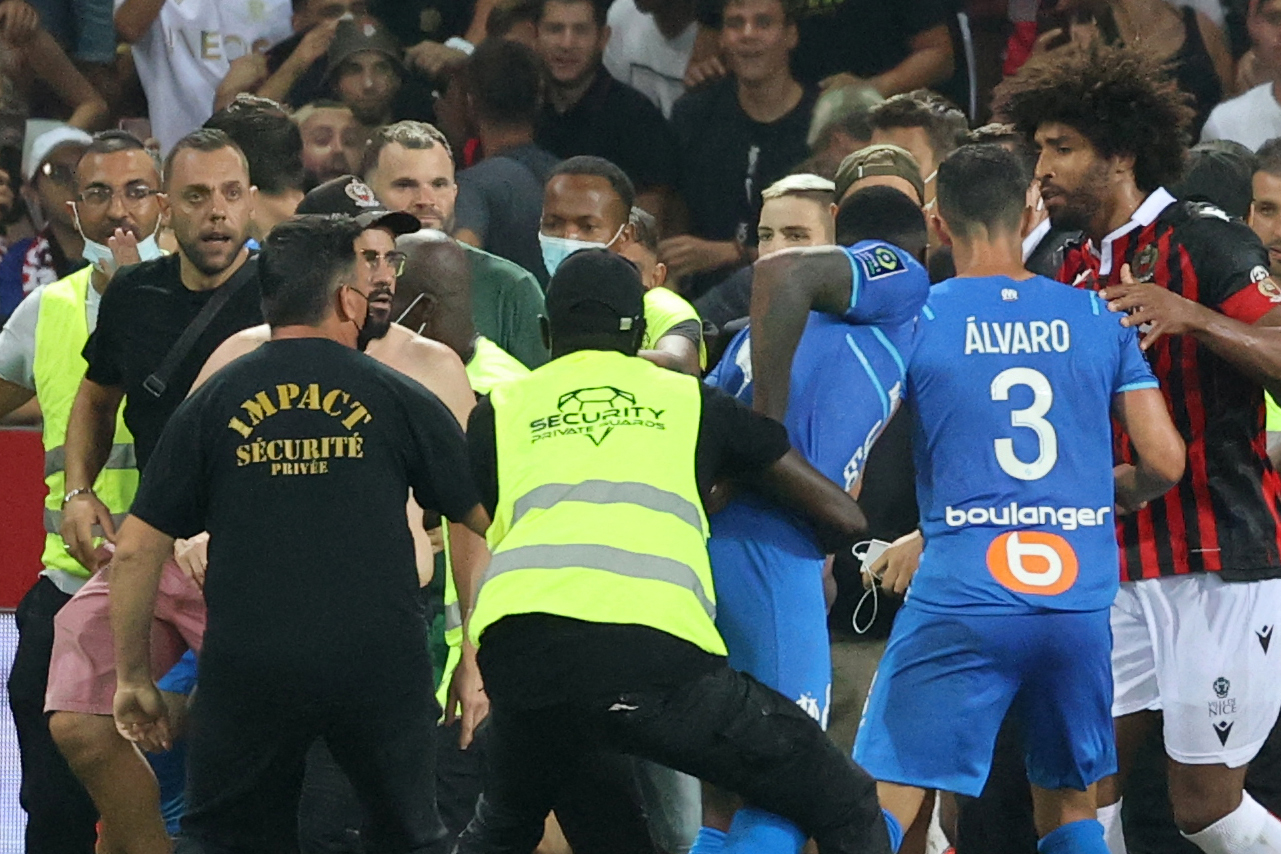 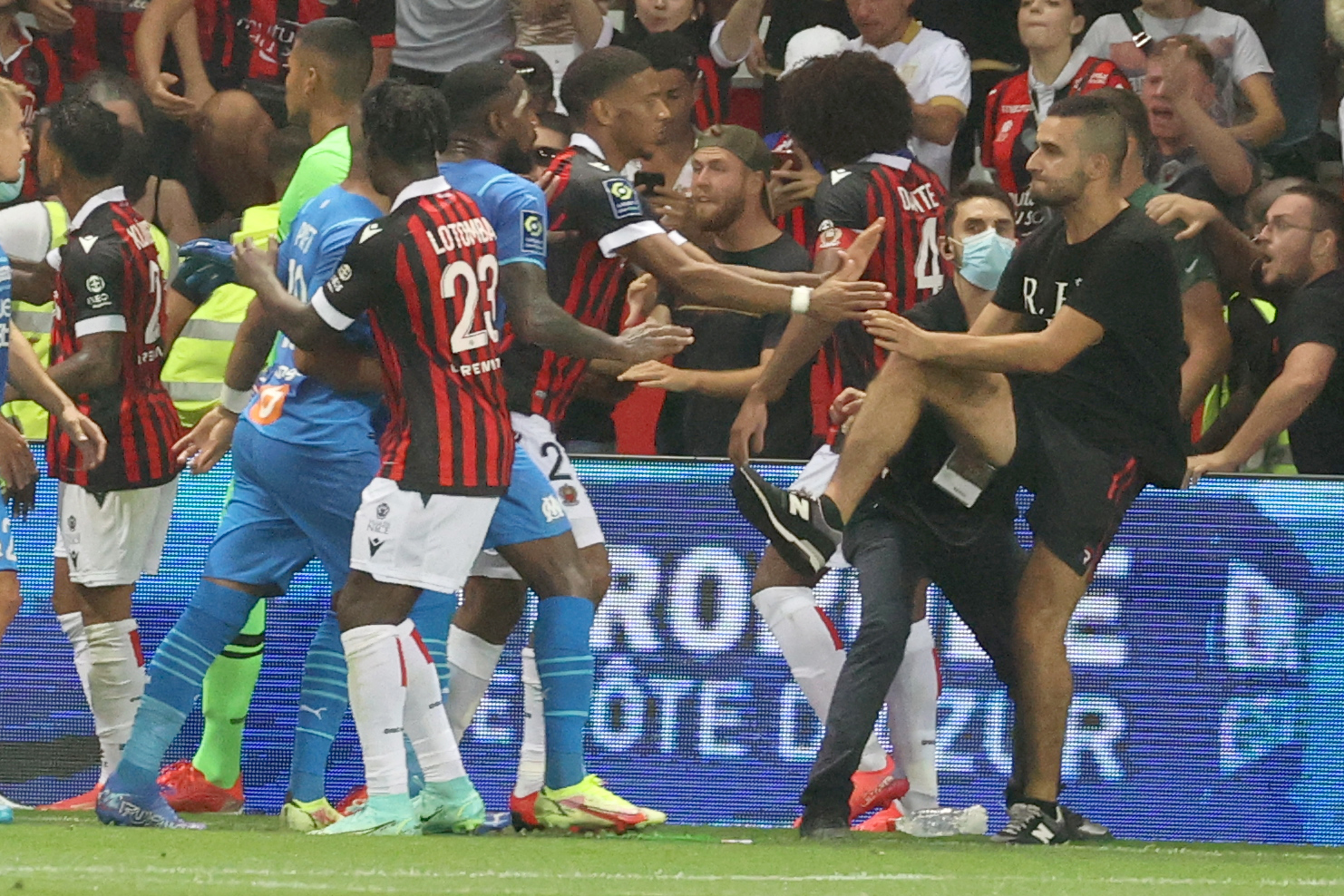 Amazon report that Nice ultras 'drew blood' from Payet – with Luan Peres and Guendouzi having strangle marks on their necks.

As per Get French Football News, luckless Peres has been at Marseille less than a month – and has already been burgled prior to being physically assaulted tonight.

Images show one moronic fan even throwing a KICK at Payet.

And staff members from both sides also got involved, with one even shown shoving one of the pitch invaders to the turf.

Marseille manager Jorge Sampaoli was visibly enraged, and had to be physically restrained after reportedly being insulted by a Nice player.

The horrendous scenes were reminiscent of the famous 'Malice at the Palace' between the Detroit Pistons and the Indiana Pacers back in 2004.

Trouble had been brewing from before the match even started, with Marseille goalkeeper Steve Mandanda having to clear bottles thrown onto the field from his penalty area prior to the game.

The match officials decided to try and get the game back on last night.

But Marseille players reportedly refused to go back out after their ordeal despite local authorities giving a resumption the go ahead.

Incredibly, when the officials returned to the field, full-time was blown on the match – with local reports suggesting Nice were awarded a 3-0 victory due to Marseille's refusal to return.

Uefa will likely launch a probe into the incident.

Nice president Jean-Pierre Rivere said on Amazon's coverage in France: "Our ultras will hold back. A lot of things happened… Marseille want to go home."

RMC report that matters even reached the stadium's presidential area, with Marseille president Pablo Longoria alleged to have had 'an altercation' with ex-Nice player Jose Cobos.