FOOTBALL fans reckon they saw the most cynical foul in history last night. 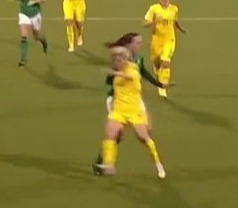 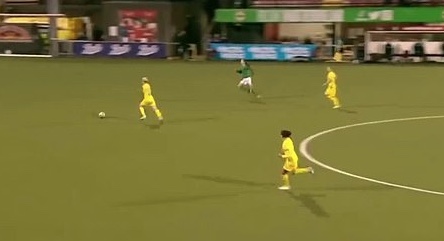 Northern Ireland's Sarah McFadden looked to be running clean through on goal in the 87th minute of the Euro 2022 qualifier.

But Ukraine midfielder Natiya Pantsulaya was having none of it.

Pantsulaya completely stepped across McFadden's line with no intention of playing the ball.

And the Ukrainian barely even waited for the referee to brandish a red card before walking off.

Replays showed that Pantsulaya was yards ahead of her opponent and could've easily cleared.

But the blatant foul left Czech referee Jana Adamkova with no choice but to sent her off.

And fans flooded Twitter in disbelief at what they had just seen. 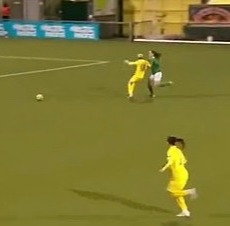 One social media user tweeted: "The Northern Ireland vs Ukraine match contained one of the most cynical fouls I have ever seen. It is almost a work of performance art."

Another said: "I've now watched it 8 million times and it become more ridiculous with each watch. The 'defender'/assaulter practically has the ball. She actually has to go out of her way to foul the NI player. It's bats**t crazy."

While one tried to explain: "I think the defender went to try and hold off the attacker so the ball would safely go to the keeper and she simply got it all wrong. That's the only logical explanation."

The foul had little impact on the game as Northern Ireland ran out 2-0 winners anyway.

They sealed a 4-1 aggregate victory to qualify for the finals in England in July 2022.