Get all the latest news on coronavirus and more delivered daily to your inbox. Sign up here.

A New York City Emergency Medical Services supervisor slammed the Big Apple’s mayor for not recognizing paramedics’ novel coronavirus-related deaths as having happened “in the line of duty” and allegedly treating them as inferior to first responders, according to the Daily Mail.

“EMS workers are not treated by New York as a uniformed or emergency service in the same way that firefighters, police officers and even sanitation workers are,” FDNY EMS Chief Vincent Variale said in an interview with the Mail.

A lot of them were sleeping in their cars then coming back eight hours later to work another 16 hours.

Variale, a 30-year veteran lieutenant and president of New York City’s Uniformed EMS Officers union, spoke to the Mail exclusively and compared the peak of the COVID-19 outbreak to 9/11.

He told the Mail four EMTs are being hospitalized and kept on ventilators after becoming infected with COVID-19. Five have died but will not be recognized as “dying in the line of duty,” he said, which he believes needs to change.

“When it's acknowledged that you died while trying to save the lives of others in the course of doing your duty that means overall your family is entitled to certain benefits,” Variale said. “We are fighting for these families now and we'll continue to fight but it's a terrible thing to have to face.” 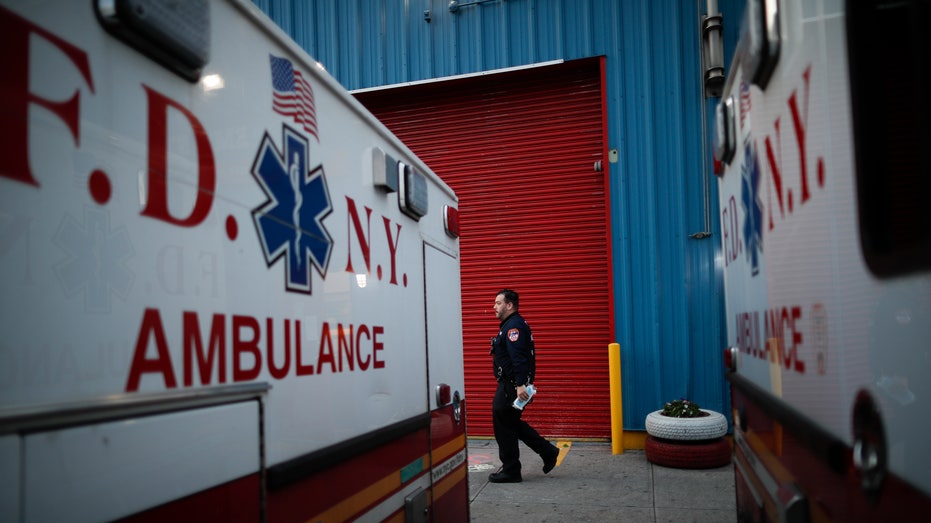 FDNY paramedic Alex Tull, who has recently recovered from COVID-19, prepares to begin his shift in the Bronx, New York, on April 23, 2020. (AP Photo/John Minchillo)

FDNY Deputy Commissioner Frank Dwyer said in a statement to FOX Business that no COVID-19 deaths "have been ruled line of duty at this time" but added that the line-of-duty classification is decided by the New York City Employees' Retirement System or the pension board, not by the fire commissioner.

"The Commissioner is supportive of line of duty benefits for any member whose death can be attributed to the duties of their employment," he said in an emailed statement.

And an FDNY spokesperson pointed to a recent question-and-answer session conducted between Fire Commissioner Daniel Nigro and FDNY members.

"I personally cannot imagine a member’s death directly related to this pandemic not being defined as line-of-duty," Nigro said, in part. "No matter what, the families of those we have lost will continue to receive support from our Foundation, Family Assistance Unit, and all of us.” 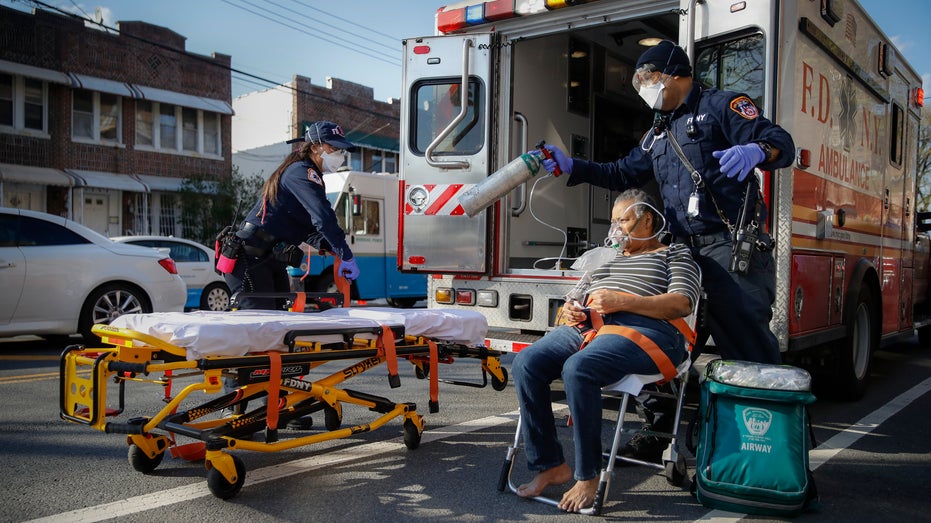 FDNY paramedics Elizabeth Bonilla, left, and Keith Kahara, right, prepare to load a patient on oxygen into their ambulance on an emergency call on April 15, 2020, in the Bronx, New York. (AP Photo/John Minchillo)

And Laura Feyer, a spokesperson for Mayor Bill de Blasio's office, said no laws have been changed regarding COVID-19 deaths qualifying as having happened in the line of duty.

“We are immensely grateful for the service of all of our first responders and essential workers and we are marshaling every resource to get them what they need," Feyer said. "We are aware proposals have been made to change federal and state law to regarding  line-of-duty death benefits to survivors of our frontline workers and we are looking at those now."

At the COVID-19 outbreak's peak, emergency calls nearly doubled from their usual average. Call volume has dropped in recent days in a sign the crisis could be easing. Still, the FDNY’s 4,000 emergency medical workers are reportedly straining to keep up.

"We were already grossly understaffed and suddenly you have almost double the number of calls and nearly a quarter of your people out sick,” Variale said. "The city and the fire department just weren't prepared. They had nowhere for our members to quarantine and so a lot of them were sleeping in their cars then coming back eight hours later to work another 16 hours.” 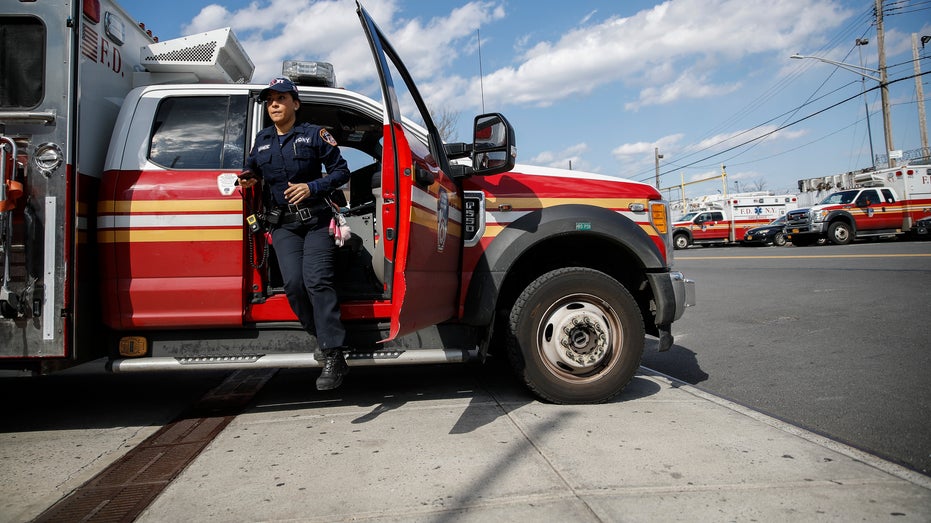 “They handed us three masks a day and figured if that's what we used we had enough. Unfortunately, we're doing 10, 12 calls a day,” he said. “It was a big problem and people were getting very sick.”

The FDNY spokesperson denied Variale’s claims and said enough PPE was provided for the number of cases to which each member was called and also emphasized the FDNY Foundation, through donors and the family assistance unit, was able to provide lodging for its members within days of the outbreak.

The spokesperson added that the foundation’s lodging program was initially offered to people who had “considerable high-risk scenarios at home” – members who had children at home or who had underlying health conditions –  but was ultimately able to provide lodging for all members that applied.