Former Labor leader Bill Shorten says repatriation flights should resume to rescue Australians stuck in COVID-ravaged India, saying helping citizens in danger is fundamental to who we are as a country.

The Opposition frontbencher said he had been inundated by voters in his Melbourne electorate of Maribyrnong supporting the international border bans to keep Australia safe but pleading for help to get home. 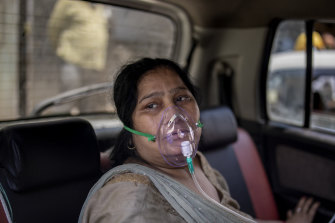 A COVID-19 patient sits inside a car and breathes with the help of oxygen provided by a Gurdwara, a Sikh house of worship, in Delhi, India.Credit:AP

India’s death toll surpassed more than 201,000 following another 3300 deaths on Wednesday and daily new infections in India surged to nearly 357,700, however experts say the true figures are far higher.

This week the federal government announced it was banning all direct flights from India and halted eight repatriation flights that were scheduled for May in response to the worsening situation on the sub-continent. It also clamped down on people being given exemptions to leave for India.

The measures, aimed at protecting Australia’s COVID-free status, leave around 9000 Australians stranded in India with at least 650 classed as vulnerable vulnerable.

Mr Shorten told The Sydney Morning Herald and The Age he supported the medical advice on closing borders and ending commercial flights but more needed to be done to help Australians caught in danger zones.

“We did it in the Lebanese civil war, we’ve done it at other times, we’ve sent war ships in the past to rescue people, it’s just what we do, its fundamental to who we are,” he said.

“When Australians are stranded overseas and want to come home, having the emu and kangaroo in your passport should have meaning in difficult times. These people in India are not there wilfully because they were COVID tourists looking to have a COVID adventure, they’ve been caught up in something that the whole world’s grappling with.”

His comments are a departure from the opposition’s policy of supporting the government’s ban on repatriation flights from India.

Mr Shorten said he had an obligation to speak for his electorate.

“The Indian-Australian population is as worthwhile and significant as any other group in Australia but to me it’s just about if you are an Australian citizen we should make sure you’re safe where we humanly can,” he said.

He added that as a richer nation, Australia had an extra obligation to help relieve whatever burden it could on India’s “over strained” health system and said “we’d be doing India a favour too.”

The advocacy group FreeAndOpenAustralia, which has taken the case of three stranded Aussies to the United Nations committee on Human Rights, said the government’s desertion of Australians in India was “morally reprehensible.”

Around 36,000 Australians around the world have told DFAT they are trying to get home.