There’s one moment during Chvrches’ set where I feel the buzz. I’m no big fan, to be clear, but the live music experience has a way, at its best, of busting through all those taste and identity and mood control barriers to smash your heart to smithereens.

The band is on a giant video screen, black sliced with shards of white. As they hit one of their ecstatic electro-rock crescendos the lights turn to lasers, which bleed off the screen and into the sky.

Lifting my head to the cosmos, I see them collide and entwine with more lasers of all colours as an explosion of white triangles snows down to glow at my robot feet. Damn. I hate my feet. The half-naked dancing guy over there has fire feet. How can I get fire feet? 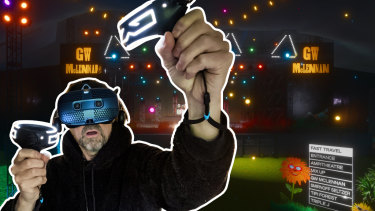 Splendour XR is the world’s first virtual music festival. In real life, I’m standing in my basement in Ugg boots. My VR headset is attached to a laptop. It has taken many hours of tech support to get here. By comparison, the sniffer-dog cops I meet at the gate of the virtual festival are pushovers.

“In-world”, as the gamers say, is spectacular. Rendered by America’s “world-leading social virtual reality platform” Sansar, the 360-degree landscape I’m cruising in my unsexy robot suit is a digital reconstruction of the Splendour in the Grass site near Byron Bay. Except with giant mushrooms looming against the purple sky.

My favourite is the Tipi Forest: a chill zone encircled by glowing, coloured tents with a mesmerising fire pit that nobody else ever seems to be at. Bliss.

I move between the half-dozen scenes by zapping on a bingo billboard with the controller in my right hand. After 20 seconds of teleportation in a fantastic infinity of calm, bubbling blueness, I arrive in another crowd of avatars, which I move through by pressing on the joystick in my left. 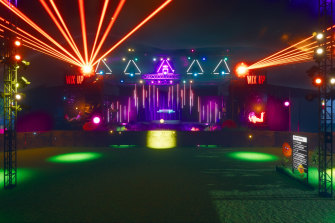 After a couple of hours, this will make me feel very ill and necessitate an intermittent lie-down schedule. And that’s without once clicking on the ads offering to bring alcohol to my basement door in real time.

Music? Sure. All pre-filmed exclusively for SXR, the unwashed rock racket of Skegss screens at the Amphitheatre, the smoochy orchestral R&B of Pink Sweats at the GW McLennan. Shot up-close in a studio some place, Phoebe Bridgers’ confessional acoustic set is great. Dr Karl’s lecture about global warming in the Forum tent? “Yeah, I’m good,” an avatar beside me demurs as he bolts for something groovier.

Yes, we can talk to each other, but I never work out how or why I’m hearing that cartoon cow dude “moo” at me repeatedly but I can’t tune in to the conversation the eggplant is having with the very small pixie lady at the Vera Blue gig. A kind Frenchman explains how I can get my own lightsabre but the skinny lizard alien doesn’t want to know me, despite being the only other avatar at the Poof Doof disco.

I could say more about the music but you know what they say about festivals. It doesn’t matter who’s playing; it’s about being there. This, ironically given the global reach of virtual community, is where an event like SXR can only pale in comparison to RL.

Tonight, for example, Tash Sultana and Denzel Curry are probably huge drawcards. You can’t feel that buzz though, because there’s only 50 of us in any virtual space; each space reiterated and repopulated in layers of parallel universes and OK that’s quite enough about the technical limitations of game-world streaming technology.

The effect is that every stage feels like the party is somewhere else. The occasional roar of a crowd is as convincing as a sitcom laugh track. There’s a spectacular throng of NPCs (non-player characters) sweeping up the hill, but they seem to have been cut-and-pasted from an especially grim zombie game. Only one of them is dancing. When Methyl Ethyl are playing, I count about 300 of him.

If I’m feeling well enough to venture back in-world for Day Two, with all due respect for the Killers and the Avalanches and Amyl and the Sniffers (I hear Charli XCX has prepared something amazing), it won’t be to sate my yearning for the live music buzz the pandemic has so cruelly stolen. It will be to try and upgrade my robot feet to a flying bowl of ramen like that tiny catwoman had at the Client Liaison gig.