If you’ve always thought your handsome hound had a shot at winning big at Crufts, now is your chance to find out.

The Kennel Club, the organisation behind the prestigious event, has launched an online dog show for pet owners stuck indoors during lockdown.

The competition includes classes for both pedigree and crossbreed mutts, as well as different age categories.

The virtual show began on Easter Monday and has already attracted more than 11,000 entries from dog lovers across the UK. 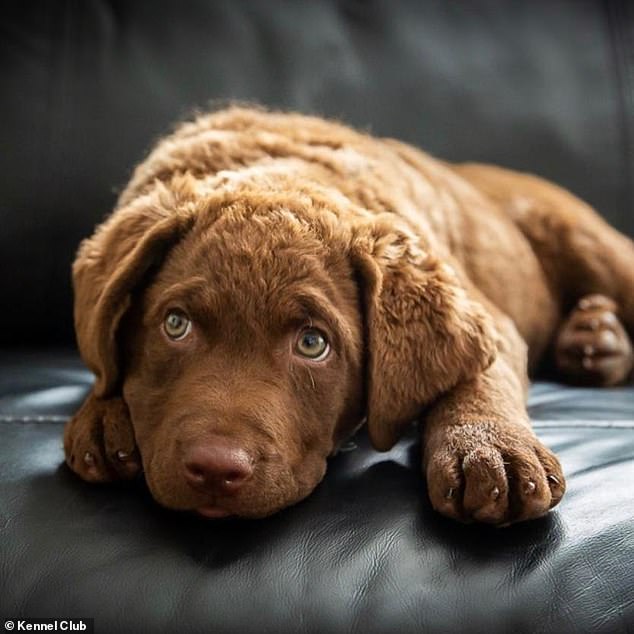 Entries for each class open in the morning, with owners urged to submit photos or a video of their precious pooch to the Kennel Club’s social media accounts – Twitter, Facebook or Instagram.

The winning hound will then be selected by judges from the club, and the winners announced at the end of the day.

You still have time to enter the Prettiest Bitch competition, which is running today, with other categories remaining this week including Best Puppy Dog Eyes, Golden Oldie (for the over seven-year-olds), Best Rescue and Best Dog Doppelganger.

The competition continues until Sunday 3 May. Here FEMAIL brings you a selection of the winners and runners-up so far. 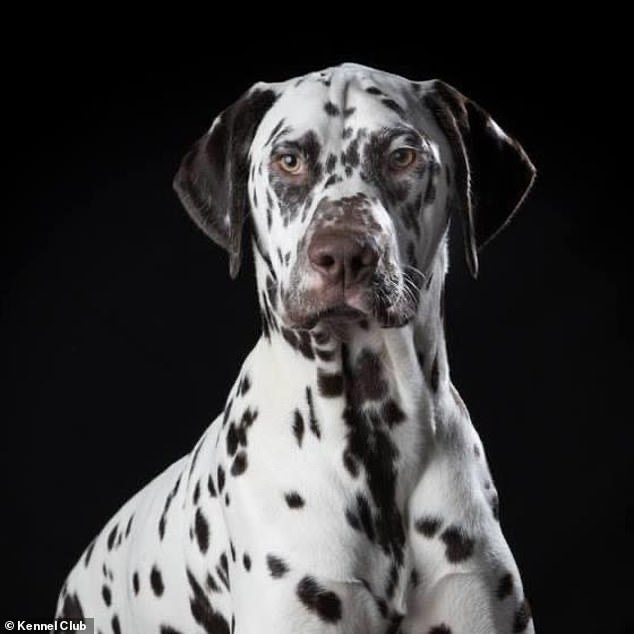 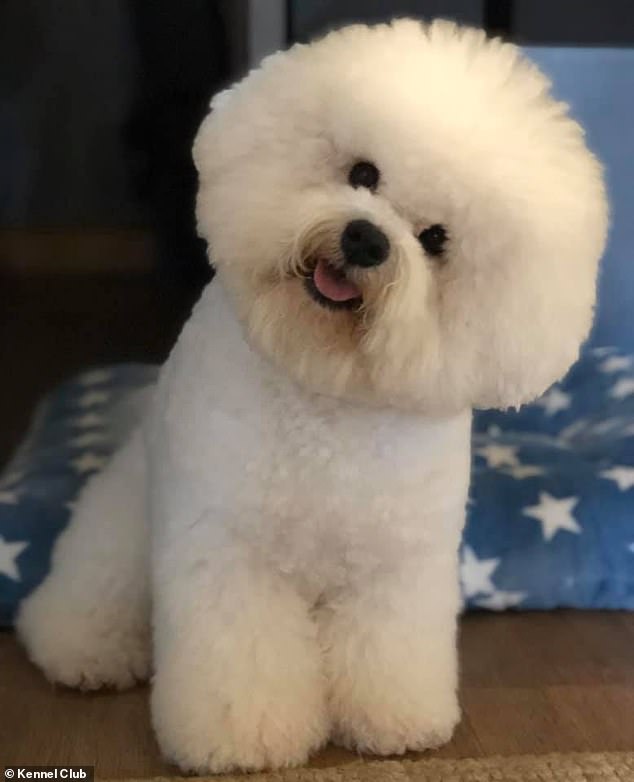 The winner of the Toy class category was the adorable and immaculately groomed Ziggy the Bichon Frise, from Northampton 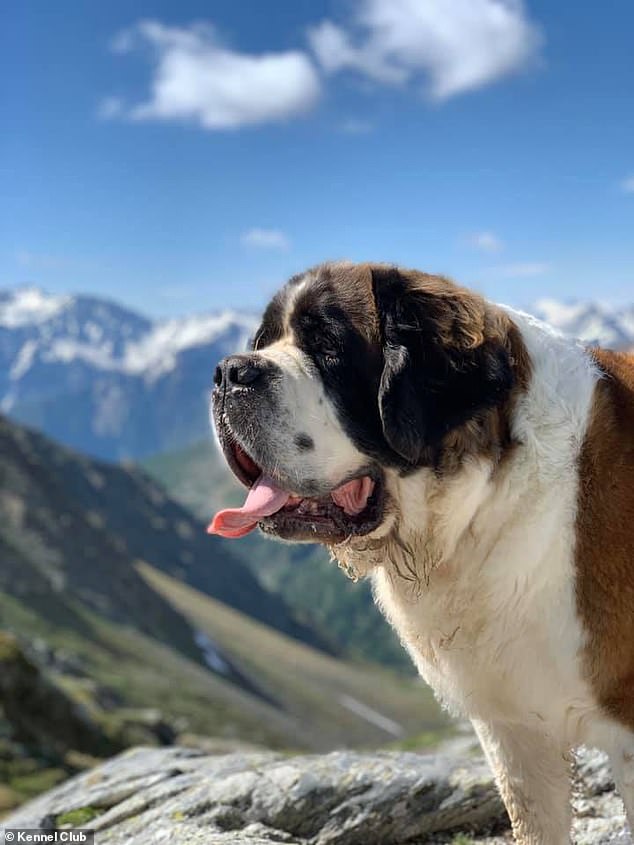 Working class winner was Queenie the five-year-old St Bernard. This photo is of her visit to her ancestral home in Switzerland. Last Christmas she helped raise money for schools in Africa selling mince pies in her reindeer antlers 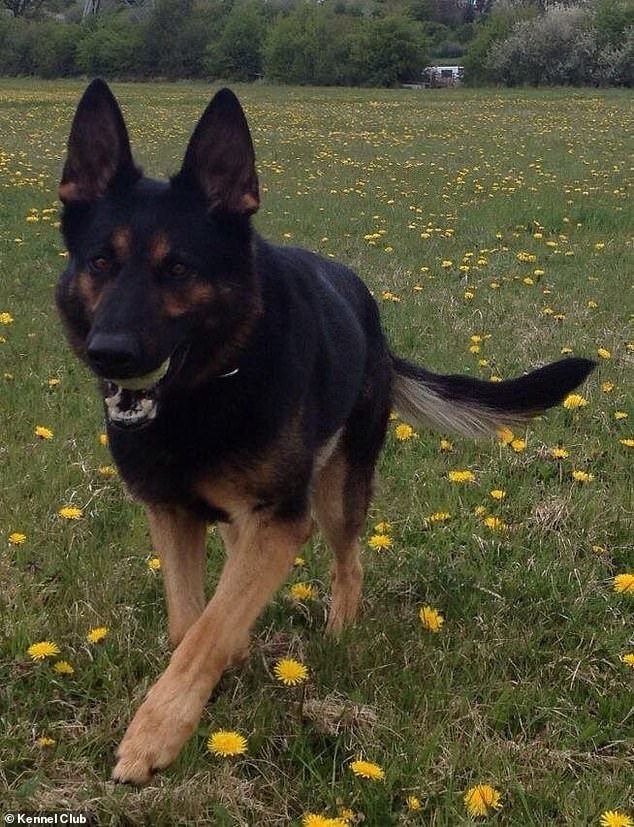 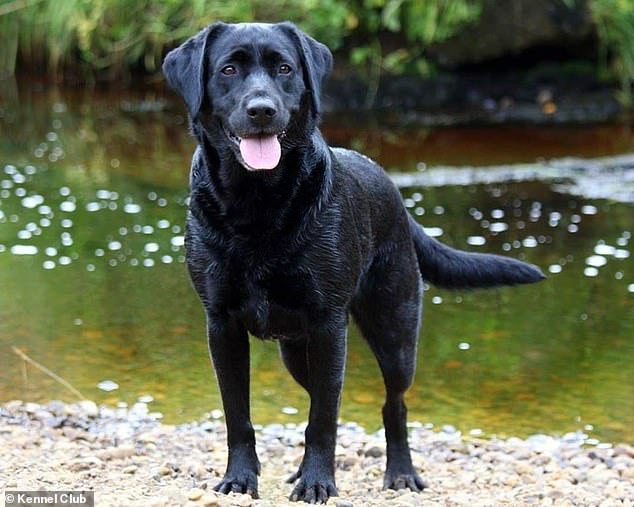 Gundog class winner was Shadow the Labrador. Shadow is a Working Gundog, Blood Donor, and has an Organ and tissue donor card, plus he’s competed at Crufts twice 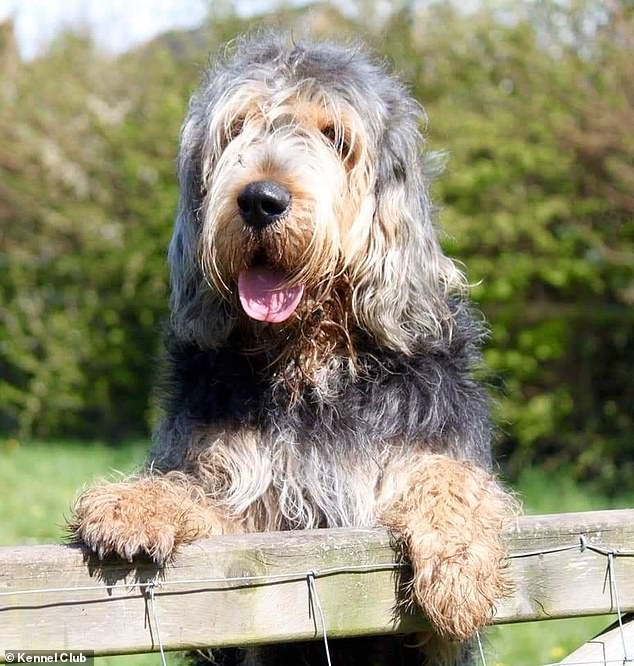 Hound class winner was Maximus the Otterhound. He loves to cuddle everyone, and enjoys naps and tasty treats 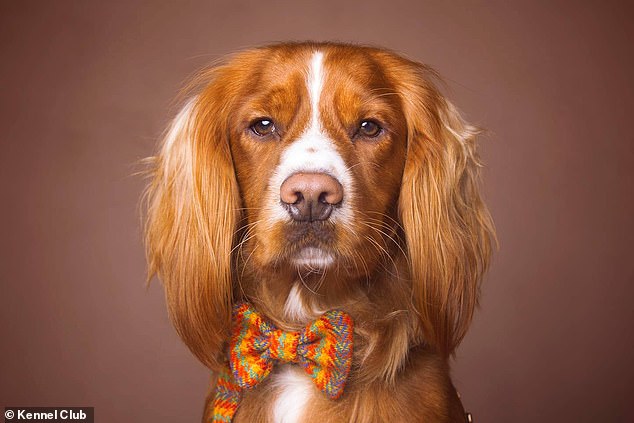 Handsome dog class winner was Bilbo the Cocker Spaniel, pictured in a rather dashing bow tie 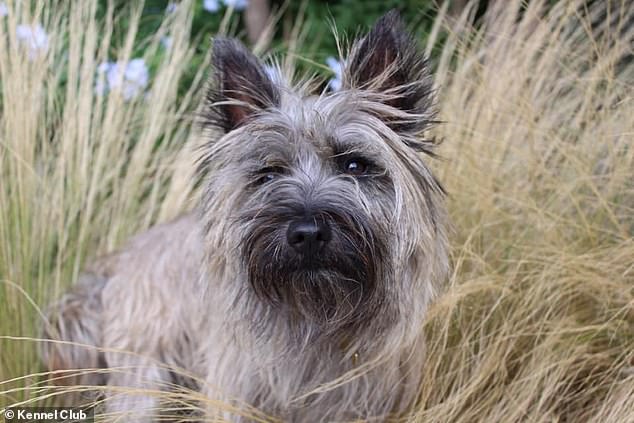 Terrier class winner was Fudge the Cairn Terrier. Despite having a bad start in life, having been abandoned just before Christmas when he was five months old, he has a great temperament and is super willing to learn. He loves his agility and trick training 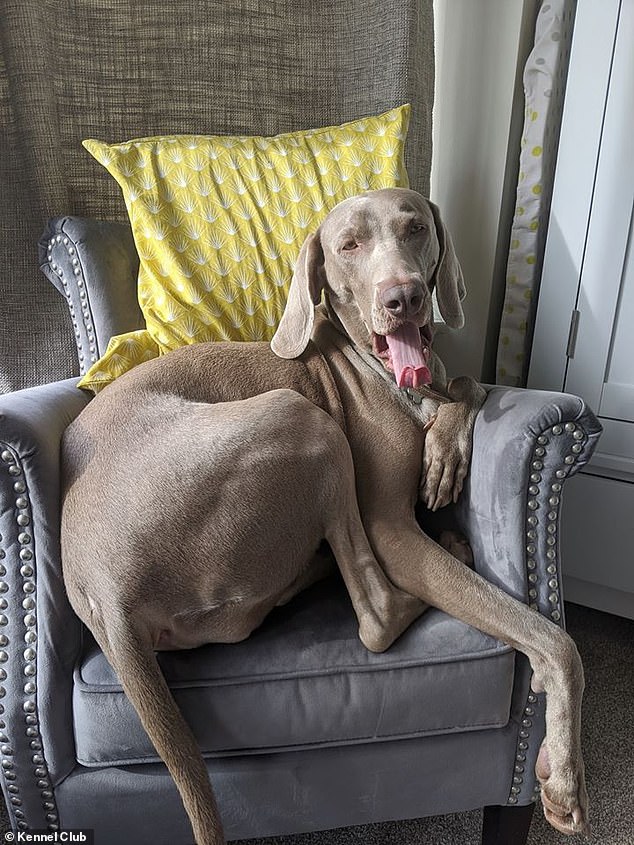 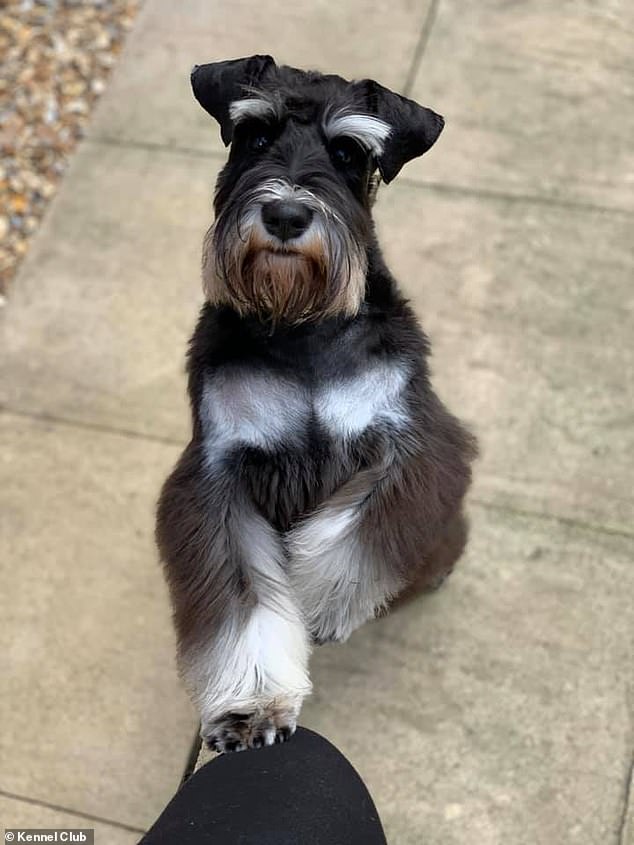 Tiggi, a sixth-month-old Miniature Schnauzer, was entered into the Best Utility competition 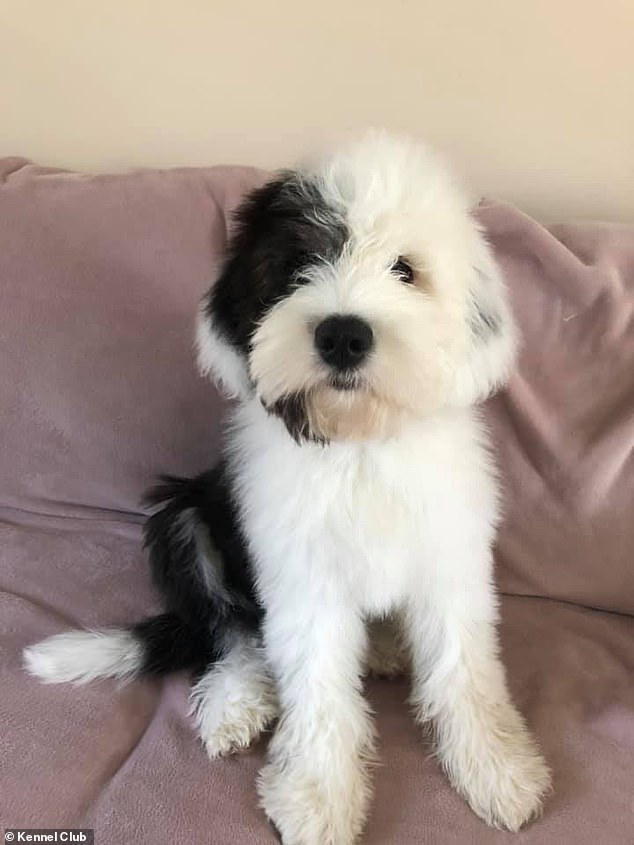 Barney, the adorable Old English Sheepdog, was entered into the Pastoral category and narrowly missed out 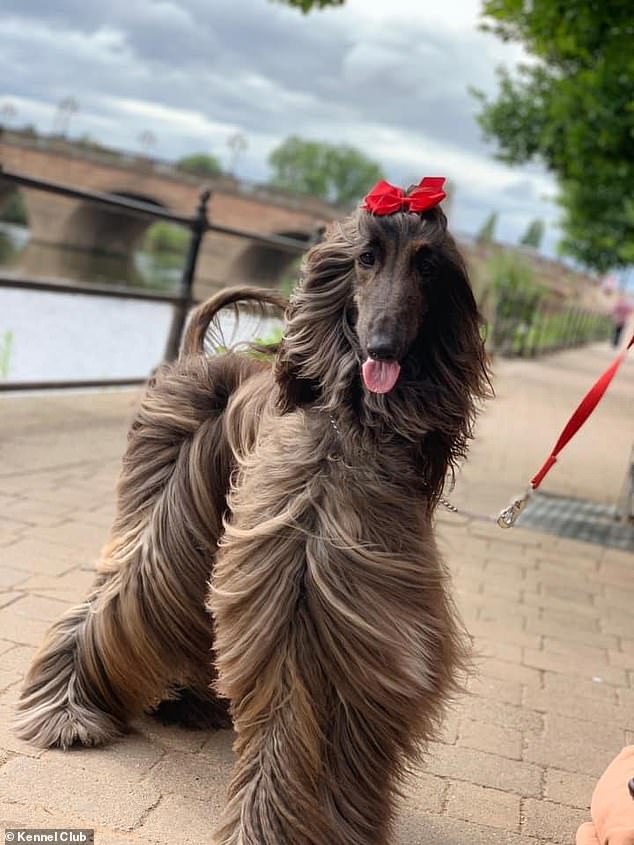 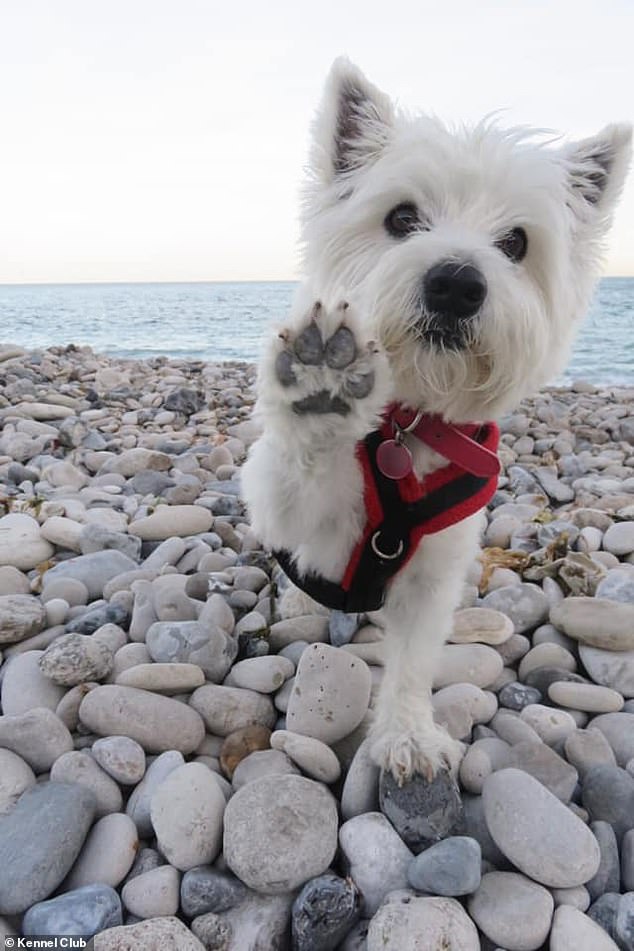 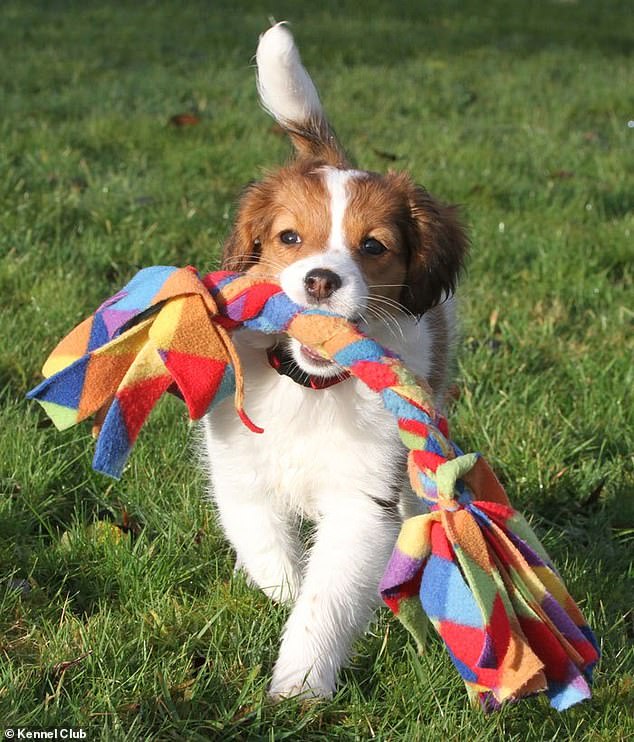 Hathi the Kooikerhondje entered best Utility – and though she didn’t win the trophy, at least she’s still got her toy 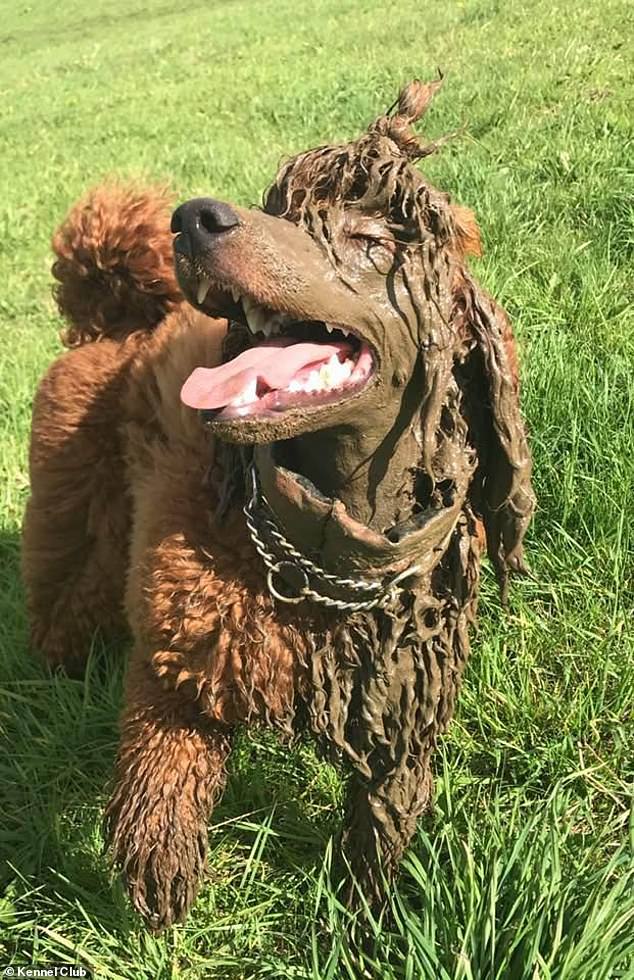 What a mucky pup! Jasper the Miniature Poodle was entered into the Best Utility category 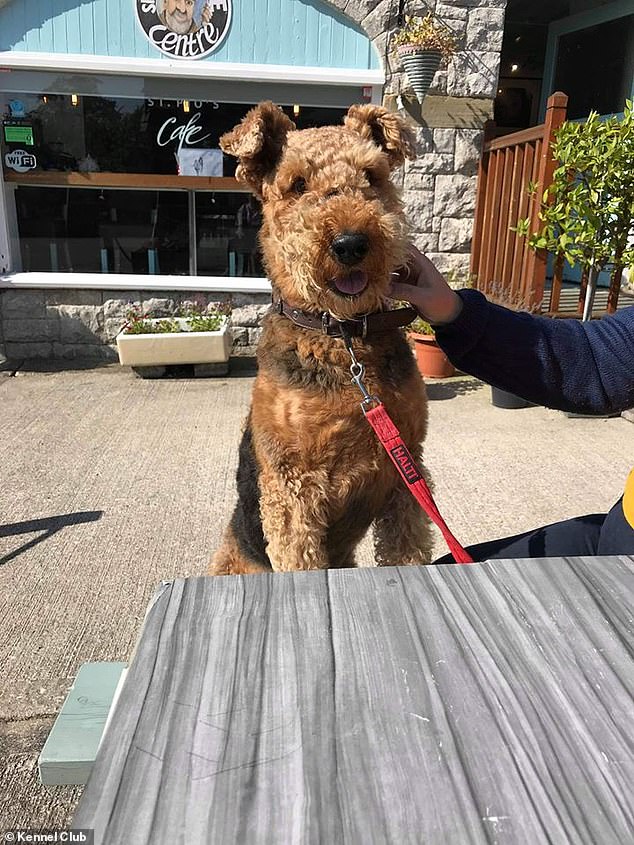 This Airedale terrier, called Mr Darcy, didn’t win overall – but he certainly won the hearts of the judges 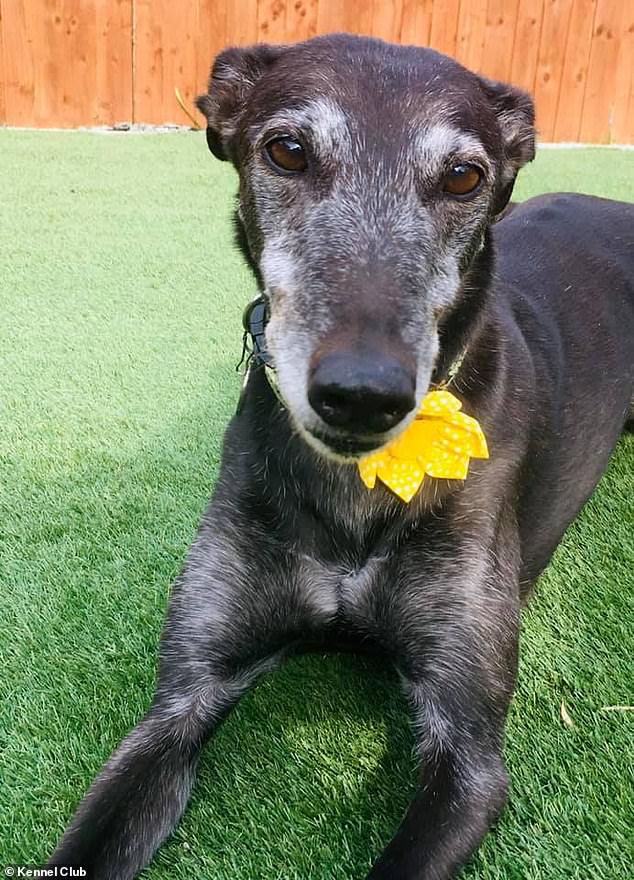 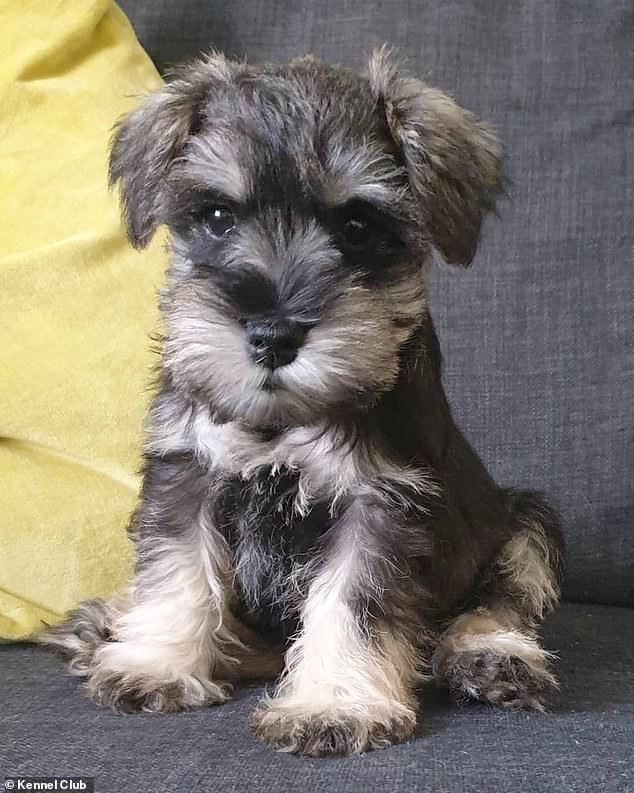 Albert, a 17 week-old Miniature Schnauzer puppy, is full of mischief and mayhem and his owner Donna credits him as being a much welcomed release from all the current craziness 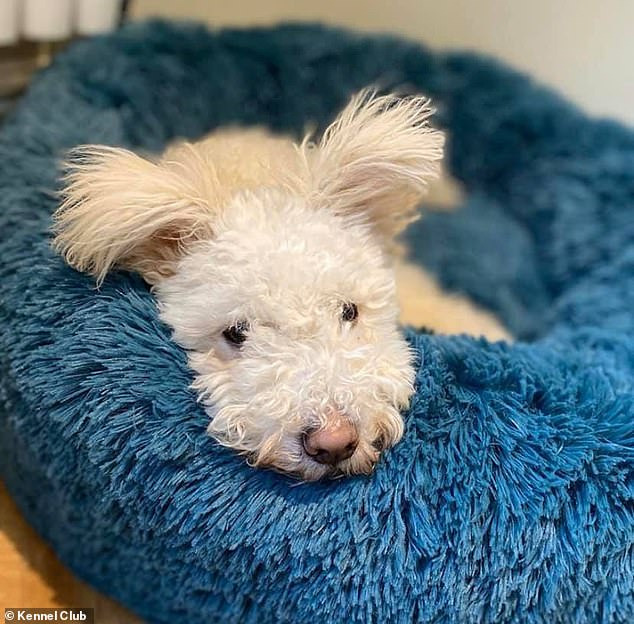 Betty, a six month-old Hungarian Pumi, was up there in the Puppy category but just missed out 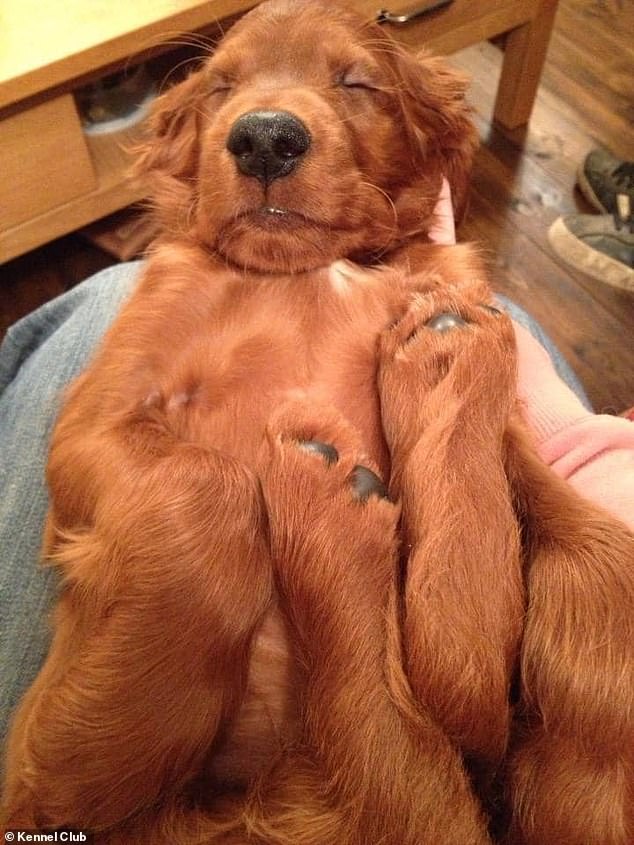 Ruari, an eight-week-old Irish Setter who loves a teddy bear (and clearly a snooze) was also among the runners up in the Puppy category 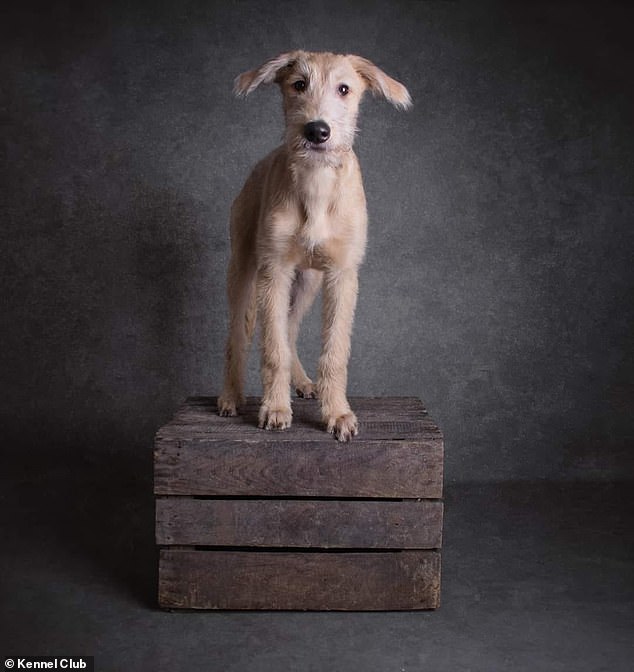 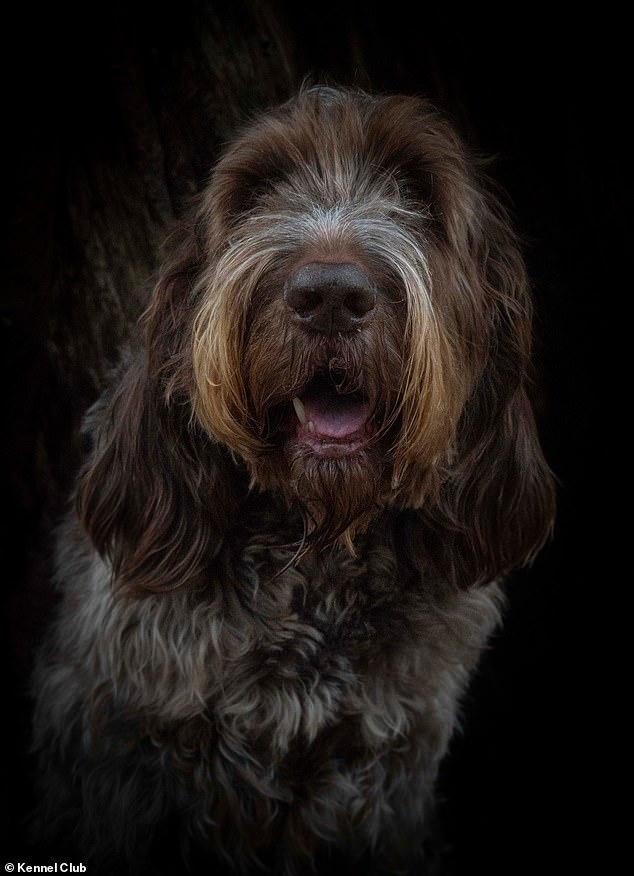 Frodo, an Italian Spinone and complete gentleman who loves to snuggle and protect his mum, was a runner-up in the Most Handsome Dog category 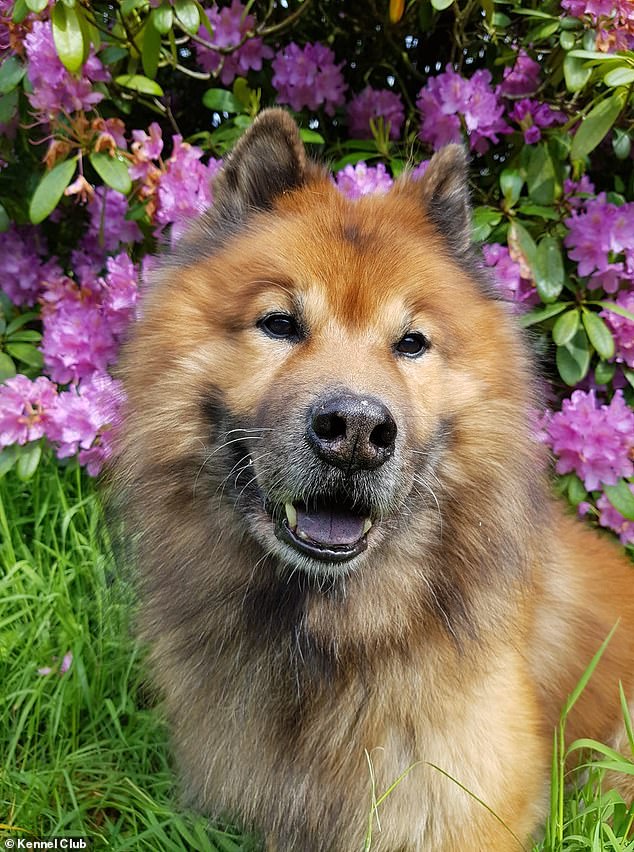 Blaze, a 12-year-old Eurasier, is apparently still as mischievous as he was when he was a puppy. He was entered into the Most Handsome Dog category

Sunday 26th April – Best Dog Doppelgänger (you and your dog)

Friday 1st May – Best At Home Handling (circle, triangle or straight up and down)

Sunday 3rd May – Best At Home Dog and Owner Workout

More information about the show and how to enter is available on the Kennel Club’s social media channels and website, as well as other lockdown tips and activities, and coronavirus information and advice: www.thekennelclub.org.uk/coronavirus.