The Morrison government is negotiating an assistance package to help Victorians who will lose income during the two-week lockdown, but it has ruled out offering wage subsidies to employees similar to the JobKeeper scheme.

The Commonwealth is canvassing the best way to offer the financial help but has resisted calls for a substantial package for Victoria, following days of pressure to support employees from the Andrews government and business, union and welfare groups. 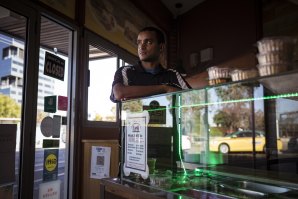 Acting Premier James Merlino unveiled a $209 million business support package on Wednesday as he announced the lockdown would be extended by a week and doubled down on pleas for federal assistance.

The package is in addition to the $250 million support announced on Sunday and doubles grants for eligible businesses – up to $5000 for small businesses and $7000 for licensed venues.

But small businesses are pleading for extra help, warning the situation for Victorian firms is dire.

Business owner Abdu Mohamed has urged the Commonwealth to help.

He has operated Green Leaf Kebab and Bakery in Footscray since 2017 and employs three casual staff, who will go without pay for at least two weeks because of the lockdown.

“It’s very painful,” Mr Mohamed said. “It’s really challenging when you have six or seven hours to shut everything … Last week, we had to throw out $8000 worth of stock.

“It was a very challenging time last year, but we got some JobKeeper and a bit of small business support package, and we survived to pay the bills and wages … now there’s nothing.

“We’re just hoping and working hard to get through it. We don’t have anything to hold our hand and we don’t know what will happen tomorrow.”

Federal Treasurer Josh Frydenberg met his state counterpart Tim Pallas on Wednesday, with the latter confirming the Commonwealth had indicated it would be prepared to consider extra financial support for locked-down Victorians.

Senior federal government sources have told The Age one of the options being considered is a one-off payment akin to the emergency and disaster recovery fund. There would not be a payment specific to Victoria after Mr Pallas asked Canberra on Sunday to match the $250 million state package.

While Mr Pallas has argued for a wage subsidy like the JobKeeper payment, which stopped at the end of March after running for a year at a cost of about $90 billion, federal sources have insisted this is off the agenda.

Eligibility for JobKeeper was determined by the fall in turnover at a company over a period of months, raising questions about whether it could be set up for a period of a few weeks.

The federal position is the assistance would have to be available to people in other states in the event of any future lockdown. There is concern a substantial targeted package to Victoria would create incentives for longer restrictions.

Mr Pallas, who blasted the Commonwealth on Sunday, softened his language by Wednesday evening following his meeting with the Federal Treasurer.

“[The meeting] went better than the last few we’ve had and there’s a general recognition the problems the state is confronting are substantial and the state government is making a substantial contribution,” Mr Pallas told ABC Radio Melbourne.

“I just reminded the Federal Treasurer Victoria has done most of the heavy lifting – it’s not Victoria’s fault we’re dealing with the leakage out of hotel quarantine in South Australia.”

Prime Minister Scott Morrison was due to discuss options on Wednesday night with acting Premier James Merlino, who reiterated his pleas for federal support and said if the Commonwealth refused to provide further assistance he would raise it at a national cabinet meeting on Friday.

“A lot of Victorians, a lot of Victorian businesses are doing it tough right now, and it is our clear expectation that the federal government will provide them the support that they deserve,” Mr Merlino said.

“They need support and the support we are providing is bigger and broader than the support we provided in the February lockdown, but we need the federal government to deliver on what they are responsible for, and that is around wage subsidy.”

Mr Morrison told Parliament decisions on lockdowns were “solely and totally” the responsibility of the states, which had “jealously guarded” their powers during the coronavirus pandemic.

While he made no criticism of the Victorian government for imposing the lockdown, he emphasised the responsibility of each state to look after its communities if it had to resort to widespread restrictions.

Mr Frydenberg said Victorians had been subject to 140 days of lockdown, compared to the average of only six days for other states, and the “incredible contrast” also meant some students in Victoria had not been to school for 21 weeks since the pandemic began, compared with 29 days absent for students in NSW.

“This has been a terrible time in Victoria over the course of this pandemic,” Mr Frydenberg said.

“So I will listen to Tim Pallas, the Prime Minister will speak to James Merlino, and our officials will talk, and we will consider what they say.”

The tensions over the lockdown contrast with progress between the federal and state governments over quarantine facilities, with Mr Morrison strongly backing Mr Merlino’s plan for a dedicated centre outside Melbourne and negotiations said to be “very close” to a resolution.

The federal government is pushing the Victorian government to build the facility faster than planned, so it is running as soon as possible next year, and favours Avalon as the site rather than Mickleham.

Restaurant and Catering Industry Association chief executive Wes Lambert said the decision to extend Melbourne’s lockdown would be a blow to the accommodation and food industry, which stood to lose about $1 billion in revenue over two weeks.

“Since the first snap lockdown in mid-November in South Australia, it is apparent that both the Victorian and federal governments had not made contingency plans for extended lockdowns and are now scrambling to provide support to desperate business owners and employees,” he said.

“Reminding businesses and employees over and over about stimulus from the past is not going to put food on the table in the present and future.”

Victorian Chamber of Commerce and Industry chief executive Paul Guerra said this lockdown had been the hardest for businesses, and he called on the two tiers of government to work effectively together.

“We need to see support come to the fore here,” Mr Guerra said. “It’s not business’ fault, it’s not workers’ fault that we’re back in lockdown … and if we don’t get support, some businesses just won’t come back and unfortunately some workers will choose to go north, and that will make it even harder for businesses to come back.”