Parental pride is a wonderful thing. That warm glow you get watching your little darling triumph at sport, music or whatever, has always been hard to beat.

But nothing has made me feel quite as smug as the moment, shortly after 1pm on Easter Monday, when I peeped into my oven and glimpsed my new baby: a perfect, golden, ‘20 per cent wholemeal retarded San Francisco boule’.

It was a loaf of sourdough bread. A loaf that I, alone, had created.

In fact, it was a sort of Holy Grail of sourdough baking, a complex creature that can be produced only using culinary techniques with names such as ‘autolyse’ and ‘bassinage’.

Making a passable version of this loaf, with its crunchy crust, addictive tang and endless complex flavours, takes three days. 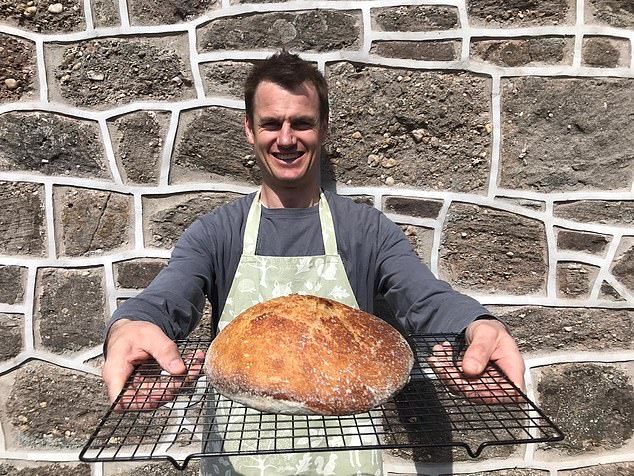 Guy Adams (pictured) revealed he’s been perfecting sourdough, since he was unable to purchase yeast in the home-baking aisle at Waitrose

For me, those 72 anxious hours were the culmination of an even longer project: a fortnight-long journey into the world of sourdough that began during the panic-buying phase of the coronavirus emergency in late March.

With lockdown looming, our worried nation decided to liberate their bread machines from the dusty recesses of their kitchen cupboards. Then everyone headed off to stock up on yeast.

I was late to the party — so by the time I reached the home-baking aisle at Waitrose, yeast had vanished.

To this day, the shelf remains bare. And it is unlikely to fill up soon: a spokesman for Allinson’s, which usually sells 350,000 packets of the stuff a week, tells me there has been a fivefold increase in demand.

But there is an alternative. As millions are discovering, there is one very fashionable type of bread that can be made without shop-bought yeast. It’s delicious and — trust me! — making it will become an obsession.

Sourdough is made from just three ingredients: flour, water and a little bit of salt. It works by harnessing the invisible yeasts that already exist in flour, in the air or on the skin of your hands to create a unique loaf.

Baking it takes time and care, and it can go wrong (have a look on Instagram under the hashtag ‘#showusyourf****dloaves’).

But when you get sourdough right, it will be the best bread you have ever tasted. 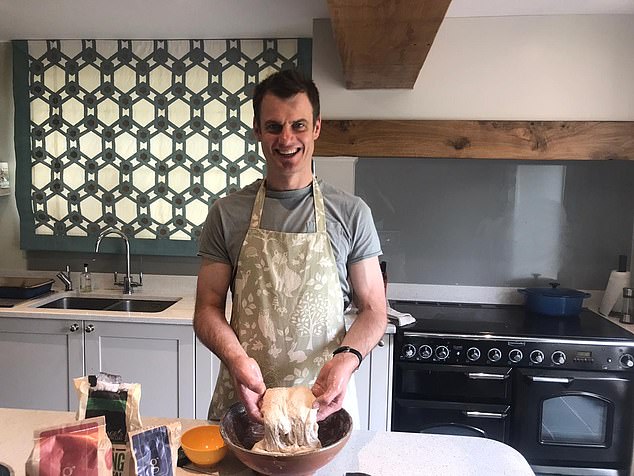 In recent years, sourdough baking has come to be associated with bearded hipsters and £5-a-loaf artisan bakeries (it is, after all, vegan-friendly and the perfect base for avocado toast).

But the coronavirus seems to have made hipsters of us all, and many people are now organising their lockdown around the gentle rhythms of baking’s daily timetable.

I have even heard sourdough cultivation described as the Covid-19 version of World War II’s ‘victory gardens’, helping to feed the nation and nourish the soul.

Should you dip a toe into this beguiling world, you will soon realise that getting sourdough right is guaranteed to make you feel very pleased with yourself.

Perhaps that is why British social media is awash with photographs of recently baked loaves, often posted by delighted celebrities. I call them ‘bread braggers’.

On April 1, Stephen Fry posted an image of his first effort, a tin loaf that looked like a housebrick. But by the next day he was knocking out very attractive boules.

A more recent convert is the Olympic oarsman Sir Matthew Pinsent, who approached BBC News’ technology expert Rory Cellan-Jones (a mustard-keen amateur) for advice on a ‘mould issue’ with the homemade ‘starter’ used to make his bread. 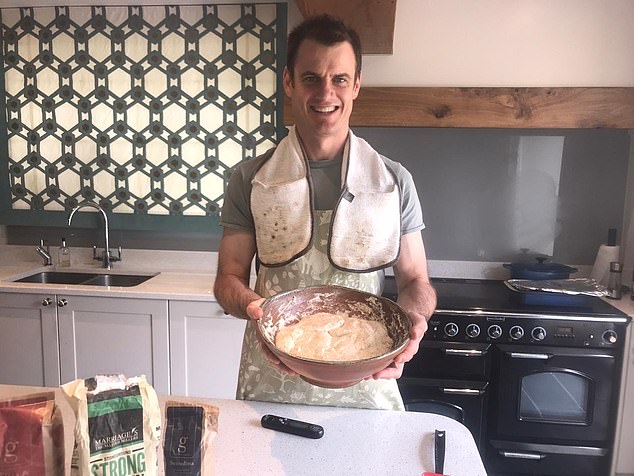 Guy (pictured) said his early efforts of creating a sourdough ‘starter’ looked like paint, but a good starter should look unctuous and bubbly

Pinsent was talking about the tricky first step on every sourdough journey: creating the ‘starter’, which is essentially a never-ending supply of fast-multiplying home-grown yeast. The process takes roughly a week and involves leaving damp flour in a jam jar or pint pot, where it should begin to ferment.

A good starter looks unctuous and bubbly, and can double in size in four hours after its daily ‘feed’, when you mix in a little fresh water and added flour.

My early efforts looked like paint. After a few days, a layer of clear liquid had appeared on top and the whole thing — which should smell rich and yeasty — had a dubious whiff about it. I was saved by a woman called Vanessa Kimbell, whom I came across on Instagram. She is Britain’s top sourdough expert and runs a sourdough school in Northamptonshire.

After a brief online inspection of my ropey-looking starter, she diagnosed the problem — I’d been using a supermarket brand of strong white bread flour.

This stuff contains very few natural yeasts, apparently. And I’d been storing my starter in the kitchen, where the temperature is below 20c and therefore too cold. 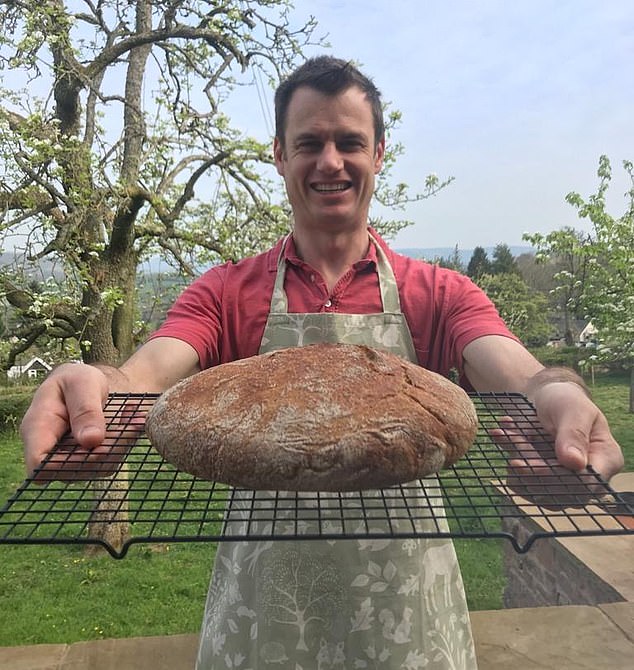 Guy (pictured) argues that in these troubled times, sourdough is one bandwagon that everyone should be jumping on

Vanessa told me to ‘feed’ the starter with wholegrain organic flour, which contains more natural bacteria, and keep it in the warm airing cupboard. I did that and, in 48 hours, it was ready to go.

Making the bread is relatively simple: you mix a bit of starter with some more flour and a bit of water to make dough, then leave it in a bowl to rest.

Over a few hours it will grow in size. Every now and then, you return to the dough and lift, or fold, or prod it to help gluten strands develop and allow the dough to build. Then, when it’s really light and springy, you put it in the oven.

Good sourdough is all about the ‘crumb structure’. Put simply, when you cut a loaf in two, it should contain huge air bubbles.

Two years ago, a Which? investigation found that 80 per cent of so-called sourdough sold in supermarkets had been made using ingredients that were not authentic. No law exists to stop this — which is why last November saw the launch of the Real Bread Campaign, which wants the Government to introduce a code of practice governing what can be sold as sourdough.

The organisers claimed that ‘industrial loaf manufacturers’ were trying to hoodwink the public, adding that sourdough is ‘not a brand, fashion, fad or bandwagon to be jumped upon’.

But the coronavirus has changed everything. In fact, I would argue that in these troubled times, sourdough is one bandwagon we should all be jumping on. 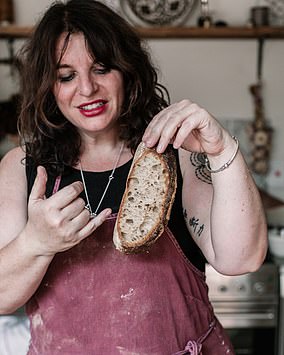 To make a sourdough starter, you need just two ingredients: organic, stoneground, wholegrain flour and water. You are capturing wild yeast and lactic acid bacteria, so you need an environment in which both thrive.

First, combine 100g of flour with 120g of warm water in a large, clean jar. Whisk the mixture well; this adds oxygen, which yeast likes.

Cover with a loose lid or damp tea towel. Allow the mixture to sit in a warm place for 12 to 24 hours. At some point between the 12 and 24-hour mark, you may start to see small bubbles forming.

At this point, discard 120g of the mixture and replace it with 60g of flour and 60g of warm water, preferably at 28c (82f). You are now ‘feeding’ your starter. Stir vigorously, cover and wait another 12 to 24 hours. From now on you will need to repeat this procedure twice a day, morning and night.

Any mixture you’ve discarded can be used up in pancakes or waffles. If you are somewhere warm, you should see real activity after three or four days.

When it’s ready, the starter should be beautifully bubbly and have plenty of yeasts and bacteria to be active enough to bake with.

HOW WILL I KNOW IT’S READY?

The starter is ready when it doubles in size about five hours after feeding. At this point, you can bake! Go to sourdough.co.uk and try My Basic Sourdough Tin Loaf recipe. Take it from there!