A Leicester City fan has been sentenced to four months in youth custody after he jumped the advertising boards and ‘swung punches’ at three celebrating Nottingham Forest players.

Apprentice carpenter Cameron Toner admitted three charges of assault by beating following the incident during the FA Cup fourth round game between the East Midlands rivals at the City Ground in Nottingham on February 6 this year.

Nottingham Magistrates’ Court heard the 19-year-old ‘took exception’ to Forest players Djed Spence, Brennan Johnson and Keinan Davis celebrating their third goal of the game and ‘entered their place of work with the malevolence of a bad loser’.

The court was told Toner had drunk four pints of Stella and had a vodka and Southern Comfort cocktail before the game, which ended in a 4-1 win for the Championship side.

Toner, of Whetstone, Leicester, was also handed a 10-year football banning order after admitting a separate charge of going on to a playing area at a football match. 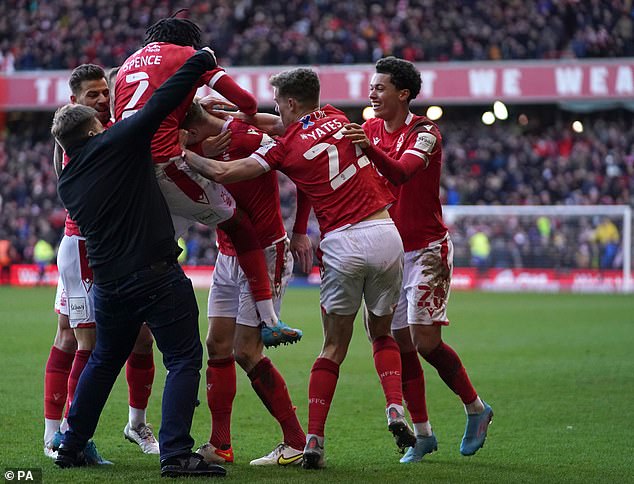 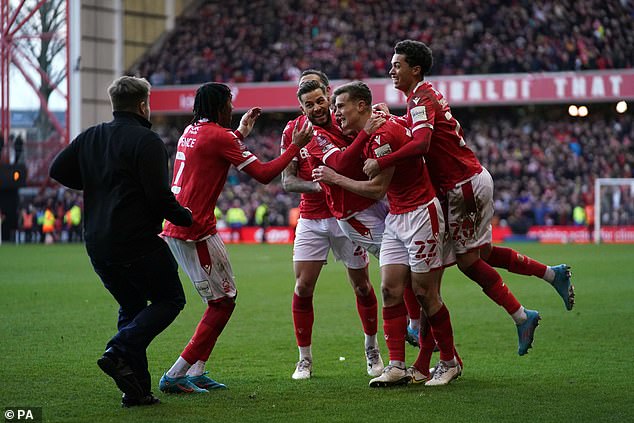 Sentencing Toner on Thursday, District Judge Leo Pyle said: ‘Yes, it was a local derby, but you knew you had the possibility of the euphoria of a win or the devastation of a loss.

‘Nobody is entitled to enter the field of play apart from the officials and the young men… who have exceptional talent and become footballers. You entered their place of work with the malevolence of a bad loser. It was a determined attack on Forest players and, in my view, it was cowardly.’

Judge Pyle added that Toner’s actions were ‘frankly an outrage and could have easily sparked public disorder’.

Outlining the facts of the case, prosecutor Sanjay Jerath said: ‘The match had already been deemed as a high-risk fixture. 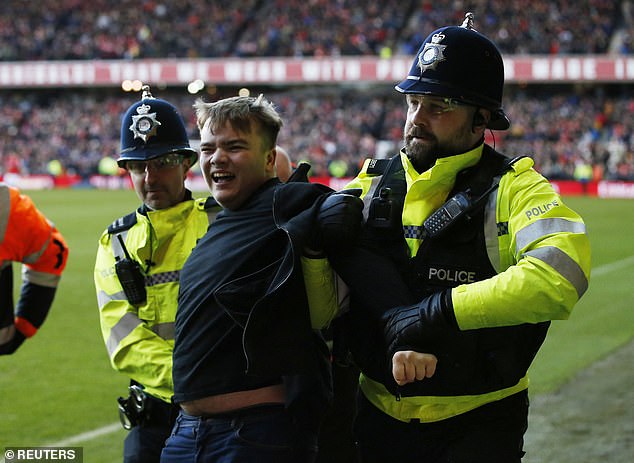 The 19-year-old, from Leicester, entered the field of play after Nottingham Forest went 3-0 up

‘This is because the teams had not met since 2014 in an official capacity. The extra cost for policing levels was part-funded by Nottingham Forest and Leicester City football clubs… £30,000 for extra security.

‘Nottingham Forest had just scored their third goal of the game and the defendant, who is a Leicester City supporter, climbed over the barriers, ran past the chasing stewards and approaches the celebrating players.

‘He is witnessed to have jumped on the players, throwing punches while the players are celebrating.’

Reading a statement made by Forest winger Brennan Johnson, Mr Jerath said: ‘Whilst I was celebrating, I thought a Forest fan was joining us in celebrations. He tried to punch my teammate Keinan Davis. He swung his left fist which connected with Keinan Davis’s jaw. 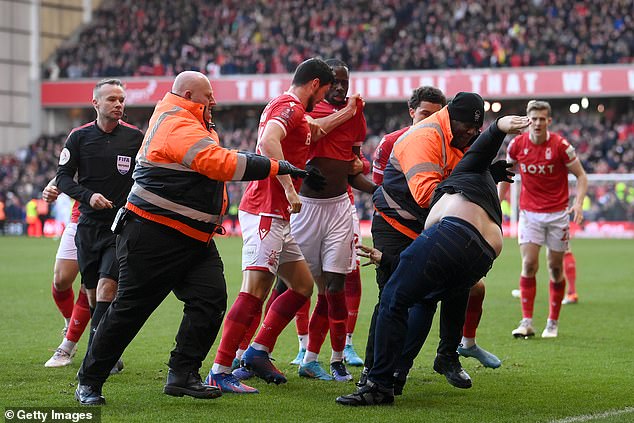 ‘He pushed me to the chest area of my body. Soon after he pushed me, he was escorted away from the group and out of the ground. I didn’t give permission for anyone to attack me.’

Mr Jerath then moved on to the statement given to police by Mr Davis, who also said Toner has ‘clenched fists’ and was ‘throwing punches’.

‘I saw him throw a punch towards my face. It happened so quick that I didn’t feel any pain. I was confused as to how a male had got on to the pitch.

‘After he attacked me I continued to play football until the half-time whistle was blown. As I was walking towards the changing room, I felt pain to my head. I feel that the pain I felt in my head was a result of him striking me.’ 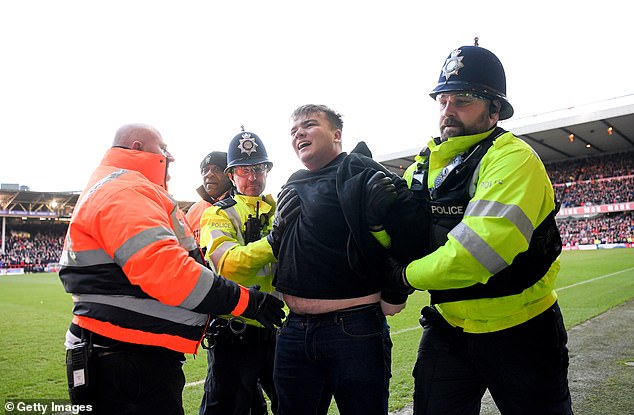 Mr Toner had four pints of Stella, a vodka and a Southern Comfort before the match

In mitigation, Toner’s solicitor Kally Sahota said the Leicester fan was ’embarrassed’. He said: ‘I’m sure the media will want to use the phrase ‘yob’ or ‘hooligan’ but that is not what he is.’

After the match, Leicester City said in a statement: ‘The club is appalled by such behaviour and offers its apologies to Nottingham Forest and its players whose safety was compromised.

‘We applaud the swift action taken by City Ground stewards in apprehending the individual involved, who will be subject to a lifetime ban from all Leicester City fixtures at home and away.’