Early last year, when the extent of the pandemic was becoming evident to senior health and government officials around the globe, many nations, including Australia, started putting up walls. By February, the Morrison government had banned entry from China, with the exception of Australian citizens, permanent residents and their immediate families. The following month, international entry bans were extended to most non-citizens. In hindsight, it was the right call. 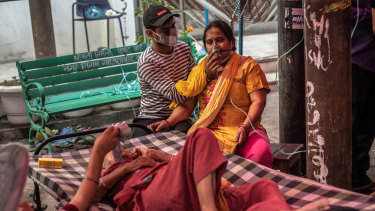 Patients suffering from Covid-19 are treated with free oxygen at a makeshift clinic in India. Credit:Getty Images

Australia’s hotel quarantine system was not introduced until late March, and the nation was still coming to grips with the measures that would be needed to keep COVID-19 contained. The learning curve has been enormous ever since. But learnt the nation has. Australia would now comfortably sit near the top of the table when it comes to restricting the spread of the virus. The most potent weapons it has to keep COVID-19 at bay while the vaccine rollout gathers pace are the hotel quarantine system and, when faced with an outbreak, contact-tracing and a willingness of most people to follow the changing social-distancing restrictions.

This has curbed the spread of the virus in Australia, despite concerns over new highly infectious variations and an upsurge in cases in many countries, including Britain and the US.

And yet, more than 12 months after first confronting the virus, Australia has determined to make the walls even higher. For the first time, the national government has made it a crime for a particular group of its own citizens who are in desperate need of help to return home. Any person who has been in India in the previous 14 days has been barred from entry as of Monday. Those who breach the edict face a penalty of up to five years’ jail or a fine of up to $66,000. Even at a time when drastic measures have almost become the norm, this is an extraordinary step for the federal government to take.

The ban has been justified on medical grounds. According to Australia’s Chief Medical Officer, Professor Paul Kelly, the number of positive cases in quarantine should stay below 2 per cent. According to Prime Minister Scott Morrison, “we’ve seen a seven-fold increase in the rate of infection of those in [the Howard Springs quarantine site] coming back from India”.

There is no question the influx of people with COVID-19 will put pressure on Australia’s quarantine system. But this is a system that has been in a constant state of refinement and improvement for more than a year. It has managed to quarantine hundreds of thousands of incoming travellers. If it is not capable of dealing with a surge in cases at this stage, surely the question has to be asked as to why not. And it is not as if a situation like the current one is not going to arise again. In many developing countries, it will take until 2023 for the vaccination rollout to be fully under way.

It is understandable that the federal government may want to slow down flights from India. Many  nations have already introduced some form of travel restrictions. But for Australia to completely abandon more than 600 vulnerable Australians in India, and another 8000 people there wanting to come home, is an embarrassment to this nation. This is a national emergency, and it deserves all the resources and focus that such a situation demands. These are Australians caught up in a human catastrophe of a scale that even this pandemic has not witnessed before. Each day, about 400,000 people are being infected and thousands are dying in India.

Pulling up the drawbridge will leave a permanent scar on Australia’s reputation for looking after its own. Mr Morrison, it’s time to bring these Australians home.

Note from the Editor

The Age’s editor, Gay Alcorn, writes an exclusive newsletter for subscribers on the week’s most important stories and issues. Sign up here to receive it every Friday.