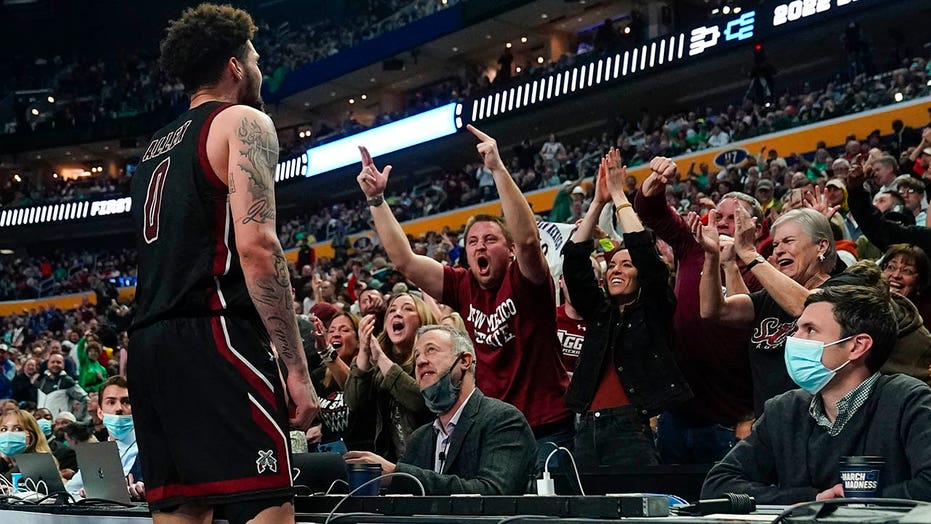 Teddy Allen scored 37 points and New Mexico State won an NCAA Tournament game for the first time almost three decades, upsetting fifth-seeded Connecticut 70-63 Thursday night to become the second No. 12 seed to advance out of the first round.

The Aggies (27-6) will face the winner of the Arkansas-Vermont game on Saturday in the West Region. In its 23rd NCAA appearance, the Aggies won for the first time since beating Syracuse in the first round in 1993.

New Mexico State had not been back to Upstate New York since beating Syracuse in the Carrier Dome. In Buffalo, Allen and the Aggies made another memory. 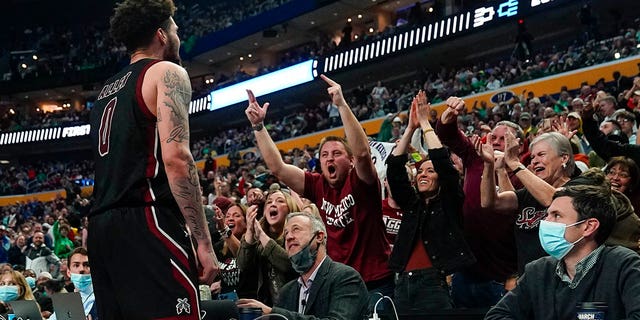 New Mexico State guard Teddy Allen (0) reacts to fans after scoring against Connecticut late in the second half of a college basketball game in the first round of the NCAA men’s tournament Thursday, March 17, 2022, in Buffalo, N.Y.
(AP Photo/Frank Franklin II)

The 6-foot-6 junior drove hard to the basket and scooped it home while drawing a foul. He popped off the floor and ran over to the sideline to flex for the Aggies’ fans before completing the three-point play for a 66-60 lead with 27 seconds left.

The Western Athletic Conference champions followed the tournament’s first 5-12 upset onto the floor at KeyBank Center. After Richmond eliminated Big Ten champion Iowa, New Mexico State asserted itself in the first half against UConn from the Big East.

The West Virginia (and Wichita State, Nebraska and junior college) transfer made a bunch of them against UConn after starting the game 0 for 6.

The Aggies upped the lead to as many as 14 early in the second half, but UConn slowly clawed back and tied it 52 with 5:08 remaining.

But the Huskies never led in the second half.

New Mexico State: This is the sixth time in the in the last 12 NCAA Tournaments more than one No. 12 seed advanced out of the first round.

UConn: Adama Sanogo, the Huskies’ second-leading scorer, never did get going inside. He finished with 10 points and eight rebounds on 4-of-9 shooting.

New Mexico State will try to win two games in an NCAA Tournament for the first time since 1970.