Northern Lights in focus: NASA plans to fly a ROCKET through the aurora borealis to study how our planet exchanges energy with space

The Northern Lights are one of the most spectacular sights on Earth, but astronomers are just as interested in the science behind them.

Now NASA has revealed plans to fly a rocket straight through them, to study how our planet exchanges energy with space around it.

The Northern Lights, also known as aurora borealis, occur on the boundary between the neutral atmosphere that cocoons our planet and the electrically-reactive matter known as plasma that makes up space.

Occasionally, when electrically-charged particles from space pour into our atmosphere, they collide with the neutral particles and set them alight, resulting in the beautiful dancing waves of light we see in the sky.

However, the aurora also stir up the broader boundary layer, and it is the impact on this layer that NASA hopes to study on its upcoming INCAA (Ion-Neutral Coupling during Active Aurora) mission. 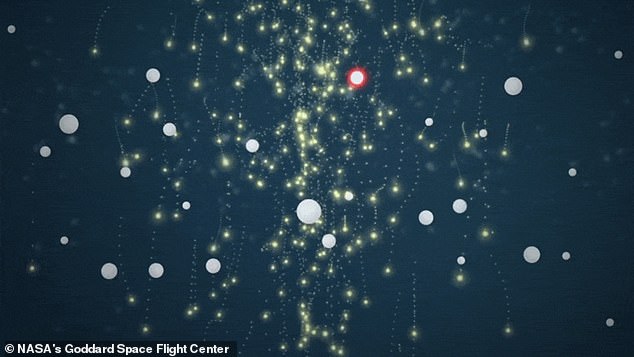 A conceptual animation showing electrons travelling down Earth’s magnetic field lines, colliding into particles in in Earth’s atmosphere to trigger the aurora

WHAT ARE AURORAS AND WHAT TRIGGERS THE STUNNING NATURAL DISPLAYS?

The Northern and Southern Lights are natural light spectacles triggered in our atmosphere that are also known as the ‘Auroras’.

There are two types of Aurora — Aurora Borealis, which means ‘dawn of the north’, and Aurora Australis, ‘dawn of the south.’

The displays light up when electrically charged particles from the sun enter the Earth’s atmosphere.

Usually the particles, sometimes referred to as a solar storm, are deflected by Earth’s magnetic field.

But during stronger storms they enter the atmosphere and collide with gas particles, including hydrogen and helium.

These collisions emit light. Auroral displays appear in many colours although pale green and pink are common.

‘As residents of the troposphere, Earth’s lowest atmospheric layer, we’re used to air made of neutral particles. The oxygen and nitrogen we breathe are magnetically balanced atoms and molecules with all their electrons accounted for,’ NASA explains.

‘But hundreds of miles above us, our air begins to fundamentally change character. Energised by the Sun’s unfiltered rays, electrons are pried from their atoms, which then take on a positive charge.

‘A once-neutral gas transforms into an electrically reactive state of matter known as plasma.’

There is no hard cutoff where neutral gas ends and plasma begins; instead, there is an extended boundary layer where the two types of particles mix.

Daily winds and magnetic disturbances send the particles flying in different directions, occasionally causing them to collide and release energy.

‘Friction is a great analogy,’ said Stephen Kaeppler, assistant professor of physics and astronomy at Clemson University in South Carolina, and principal investigator for the INCAA mission.

‘We all know that we rub our hands together, you’re going to get heat. It’s the same basic idea, except we’re dealing with gases now instead.’

When aurora are added into the mix, the amount of friction kicks up a notch, according to Kaeppler.

‘It’s like storming the football field after a college game,’ he said.

‘People at the top of the stadium run towards the field, and as you get closer to the field, the crowd gets thicker and thicker. This is how it is for electrons facing the increasing neutral density of the upper atmosphere.’ 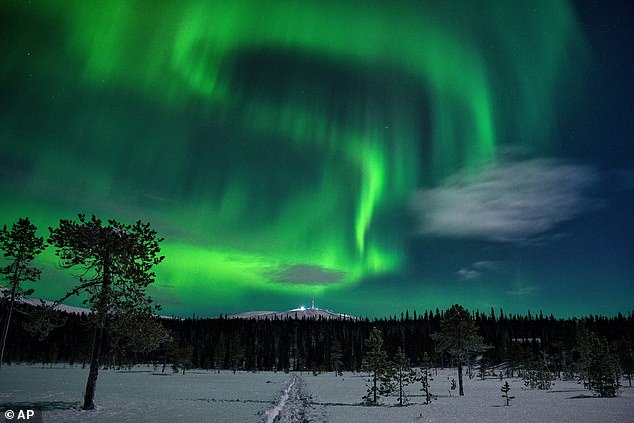 When electrically-charged particles from space pour into our atmosphere, they collide with neutral particles and set them alight, resulting in the beautiful dancing waves of light we see in the sky (stock image)

The INCAA mission will involve sending two small ‘sounding rockets’ up to the edge of space while the aurora are overhead.

Sounding rockets are small launch vehicles designed to ascend into space for a few minutes of measurements before falling back to Earth, making them ideally suited to studying brief, transient phenomena like auroras.

On its way up the first rocket will release ‘vapour tracers’ — colourful chemicals similar to those used in firework displays — before reaching its peak altitude of about 186 miles.

The vapour tracers create visible clouds that researchers can see from the ground, tracing the winds in the neutral atmosphere, like dropping food dye in a sink full of water to see how the water is moving.

The second rocket will launch shortly after, reaching about 125 miles altitude to measure the temperature and density of the plasma in and around the aurora.

Kaeppler hopes that this data will shed light on how the aurora shift the boundary layer where electrified air meets neutral — whether pushing it farther towards the ground, raising it higher, or causing it to fold in on itself.

‘All of these factors make this is an interesting physics problem to examine,’ Kaeppler said.

The launch window for the INCAA mission opens at the Poker Flat Research Range in Poker Flat, Alaska, on March 23.

Solar storms, or solar activity, can be divided into four main components that can have impacts on Earth:

While these may seem dangerous, astronauts are not in immediate danger of these phenomena because of the relatively low orbit of manned missions.

However, they do have to be concerned about cumulative exposure during space walks.

This photo shows the sun’s coronal holes in an x-ray image. The outer solar atmosphere, the corona, is structured by strong magnetic fields, which when closed can cause the atmosphere to suddenly and violently release bubbles or tongues of gas and magnetic fields called coronal mass ejections

The damage caused by solar storms

Solar flares can damage satellites and have an enormous financial cost.

Very large flares can even create currents within electricity grids and knock out energy supplies.

When Coronal Mass Ejections strike Earth they cause geomagnetic storms and enhanced aurora.

A large influx of energy could flow into high voltage power grids and permanently damage transformers.

This could shut off businesses and homes around the world.