Labor caucus members admitted on Friday that they were nervous about a new climate target that would bring them under attack from both sides for doing too little or too much.

MPs owned up to their anxiety in the caucus meeting that signed off on a pledge to cut carbon emissions by 43 per cent by 2030, a slight retreat on the goal they set at the last election. 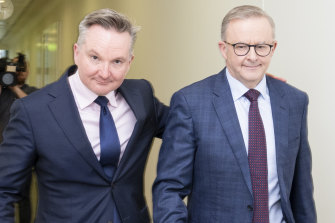 Labor leader Anthony Albanese could never satisfy both sides of this argument within the party because the divide reflects political reality.

With mining magnate Clive Palmer pouring $50 million or more into the election campaign and Prime Minister Scott Morrison claiming Albanese wants higher petrol prices, Labor MPs can see the danger in going beyond the 45 per cent goal they set three years ago.

Labor backbencher Meryl Swanson, who represents Paterson in the NSW Hunter Valley, told the caucus meeting on Friday her heart was thumping at the idea of going to the next election without a careful plan to protect the regions.

Swanson fought hard for her seat in 2016 and 2019 and represents coal miners and industrial workers who worry about their jobs. Morrison’s team has named Paterson as one of their targets.

A few other caucus members expressed similar concerns in the meeting on Friday and their preferred policy is no secret. Some wanted Albanese to match the government’s existing forecast, a 35 per cent cut, and fight the election on other issues.

This was met with an argument from Stephen Jones, who represents Whitlam in the NSW Illawarra and southern highlands, about the risk of doing too little. He was backed by Pat Conroy, who represents Shortland in the Hunter Valley and is a shadow minister assisting on climate change.

The threat from the left was made clear as soon as the target leaked to the media. Greens leader Adam Bandt claimed Labor had “given up on climate” before the new policy was even announced.

Albanese and his shadow cabinet have crafted a policy to hold the middle ground. The Labor leader calls it “modest” and this is a smart move. Times have changed since another Labor opposition leader, Kevin Rudd, called climate change the “great moral challenge” of the age.

While climate change was rocket fuel for Labor in the 2007 campaign, it is now a powderkeg that could blow up if they fumble the policy. The Coalition will pick apart the new plan and its economic modelling to test Albanese on the cost for industry, especially over the “safeguard mechanism” that requires big companies to make deeper cuts to their emissions.

This is not a weak policy. It is relatively detailed and is underpinned by modelling, released up-front in contrast to the games the government played with its modelling in October.

The idea of expanding the safeguard mechanism is a significant policy risk in pursuit of a clear policy goal, although it is being done with a modest target to limit the blowback.

In other words, Albanese is trying to handle the powderkeg with care.

Fascinating answers to perplexing questions delivered to your inbox every week. Sign up to get our new Explainer newsletter here.