The Fever on Friday claimed the Vixens had refused to board a flight to Perth for the match, which was scheduled for Sunday. Vixens trio Jo Weston, Emily Mannix and Kate Moloney were refused entry to Western Australia due to COVID concerns after having travelled to Byron Bay in NSW from their Sunshine Coast base last week during their bye round. 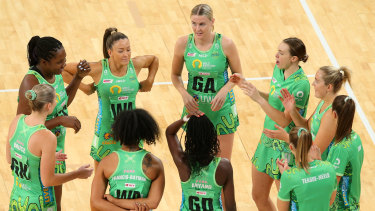 Netball Australia interim chief executive Ron Steiner has announced an investigation into the cancellation of the match between the Fever and Vixens.Credit:Getty

The Vixens say they were willing to play, but were simply unable to at such short notice, given the tough COVID-19 restrictions.

“The rest of the clubs, and I’ve had messages through from other clubs, and I won’t mention names, and it’s not from Victoria, are very unhappy with the way the West Coast Fever have done this,” Alexander said on ABC’s Offsiders program on Sunday morning.

“[The clubs] feel like they’ve hung the Vixens out to dry, so to speak. The league should have stepped in earlier than this really. I think the truth will come out in the end.”

Steiner said sanctions for both clubs were being considered.

“We want to understand exactly [what happened],” he said. “It’s such a complex set of circumstances and the sensible thing to do is to just understand everything before making any hasty decision.

“We want to have a clear understanding so we can determine the right next steps.”

Netball Australia is also considering a return to a hub style system in Queensland, similar to last season.

With six of the eight netball clubs based on the Sunshine Coast due to COVID-19 concerns, the league is now considering moving the Fever and Adelaide Thunderbirds to have all future fixtures played in Queensland.

Most Viewed in Sport