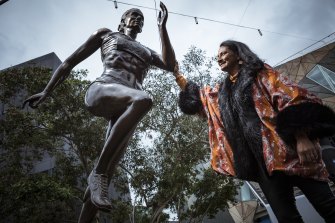 The statue was installed on Wednesday as part of the Statues for Equality initiative, which found that of Melbourne’s 580 sculptures, only 1.5 per cent celebrate real-life women. The organisation was established to address gender and race imbalance in public art.

The former Olympian-turned-parliamentarian is depicted in full flight at the Sydney Olympics in 2000. “Even though it is a statue of me, it’s not about me, it’s about black excellence,” Peris said.

Created by artist-activists Gillie and Marc and Yorta Yorta and Dja Dja Warung artist Jandamarra Cadd, the statue captures a powerful and determined Peris. Cadd also painted the portrait of a bare-footed Peris that sits in Parliament House. Peris was the first Indigenous woman to be elected to parliament and represented the ALP in the senate for the Northern Territory for three years.

The artists said there were multiple layers to the statue. The saltwater crocodile and the blackheaded python represent Peris’ totems on her mother and father’s sides. Three native hibiscus flowers, the flowers of the stolen generation, are symbolic of her mother and grandparents, who were forcibly removed from their parents. At Peris’ feet are her hockey stick and Olympic gold medal. Peris swapped hockey – for which she had won an Olympic gold medal with the Hockeyroos – for athletics and managed to remain at the top of her game. 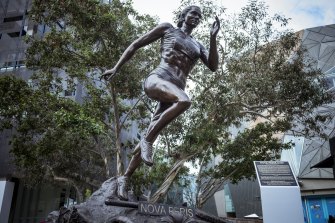 Peris says she is delighted and humbled by the statue created in her honour.Credit:Chris Hopkins

“Most statutes are of people on a podium, or a square box, but I didn’t come out of a square box, my life has been one of resilience and strength, “Peris said. “That’s why I wanted it to have me running over the country. It’s rugged.”

At the unveiling, Peris’ children Destiny and Jack said they had not seen their mother in her sporting endeavors but they had witnessed her advocacy in Indigenous health, education and human rights. “There was not a dry eye … when they spoke,” Peris said. “I want people to see that statue, young Australians particularly, to know you’ve got to have your dreams and aspirations and to know that with hard work and discipline, you can achieve anything in life.”

Awarded the Order of Australia in 1997, Peris is an official ambassador for the Australian Aboriginal Education Foundation, which provides scholarships for Indigenous students. Later in the year, the statue will move to her hometown of Darwin.

It’s not the only installation at Fed Square this week. An 8.5-metre-high, bright pink immersive artwork that doubles as a life-size maze, called The Knot, has also been unveiled. 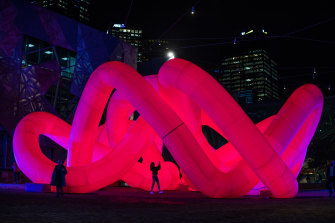 Designed by French architect-turned-artist Cyril Lancelin, it looks like a piece of wacky knitting, dropped from a giant set of needles and changes appearance as you walk through it. At night, when lit from inside, it glows. “When the sunlight comes, it will have shadows on itself,” the 46-year-old Lyon-based artist said. “It’s easy and complex at the same time.”

Made using inflatable plastic because it’s transportable, recyclable and can create a sizeable form without using much material, The Knot is intended “to take people to an unknown place”.

“It’s a surprising artwork. The idea is to make people go inside and when you’re inside, to explore, to feel like you’re somewhere else,” Lancelin said. “There’s no building or space like this that we know… It’s like a new place, a new exploration.”

The sculpture heralds Bastille Day celebrations at Fed Square this weekend when stalls will sell French fare from mulled wine and Armagnac to crepes and cheese. Classic French films will play on the main screen, talks will cover French history and art, wine and culture, and roaming performers will provide live entertainment, from classic tunes to electronic.

Lancelin’s art is eclectic, using primitive shapes: spheres, cylinders, cubes, pyramids. His work, via his studio Town and Concrete, includes Flamingo Torus, a massive interwoven flock of pink flamingoes in New York – the legs reminiscent of The Knot – Blue Pyramid made from what look like stainless steel balloons in Lisbon, and Mix, a large-scale piece made from fake watermelons in Beijing.

“The thing about artwork is I like it to be immersive: people can look at it, then they can look from the inside,” he said. “It doesn’t exist without the public, the public make the work.” 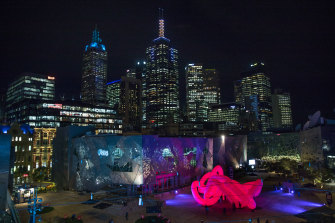 At night the sculpture seems to glow.Credit:Jason South

Based on mathematical equations, Lancelin said the circular form of The Knot responds to the hard edges and triangles of Fed Square.

While disappointed he can’t be here to see the finished work in situ, Lancelin said Instagram allowed him to engage. “I’m always interested to see how people talk about it, not by words but by their pictures. It’s like a dialogue, [there are] always unexpected pictures.“