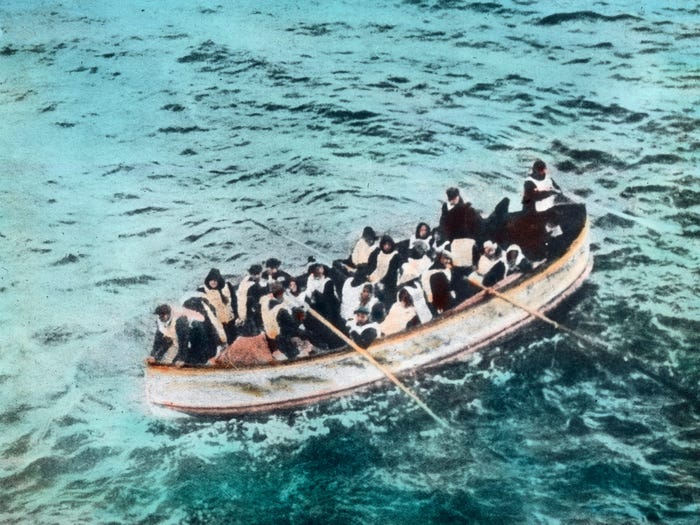 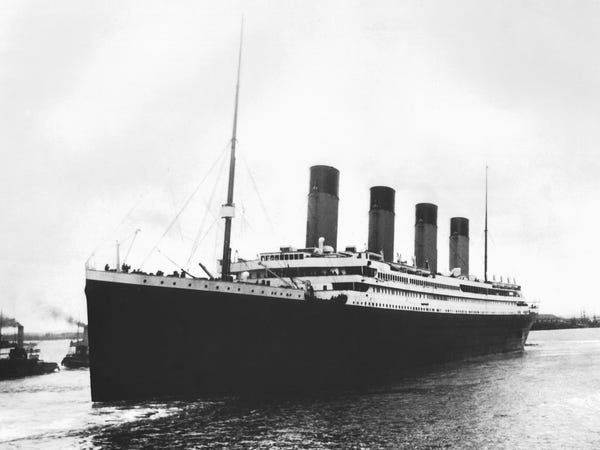 A British passenger liner, the Titanic was operated by White Star Line and was traveling from Southampton, England, to New York City.

At 11:40 p.m. on April 14, an iceberg was spotted 400 nautical miles south of Newfoundland, Canada — but it was too late for the ship to change course. 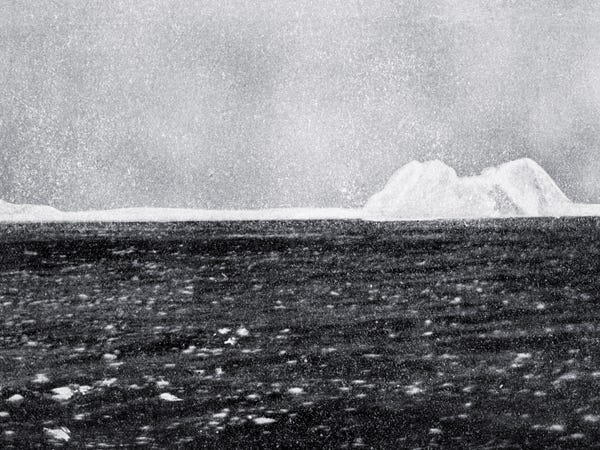 The two lookouts, Fredrick Fleet and Reginald Lee, failed to spot the iceberg in time. Their job had been difficult due to an unusually calm ocean, which made the icebergs less visible, and because their binoculars were missing.

The Titanic attempted to avoid the iceberg, but failed to turn in time. As the ship scraped the iceberg, it tore a hole in the side of the ship, rupturing at least five of the watertight compartments.

By 2:20 a.m., the stern of the Titanic slipped under water, and the surviving passengers never saw it again. 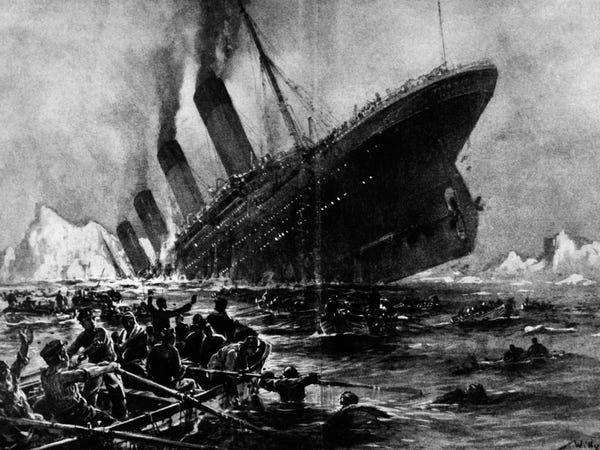 After just an hour, the ship was quickly filling with water, and passengers were panicked. Due to the water, the ship’s bow continued to sink, causing the stern to rise into the sky.

By 2 a.m., the crew was released by the captain. Shortly after, the Titanic’s lights went out, the ship broke into two pieces, and the bow sank beneath the waves. Twenty minutes later, the stern followed suit, sending hundreds of crewmembers and passengers into the sea.

Of the 2,200 or so people aboard the Titanic, only around 700 people made it into lifeboats. 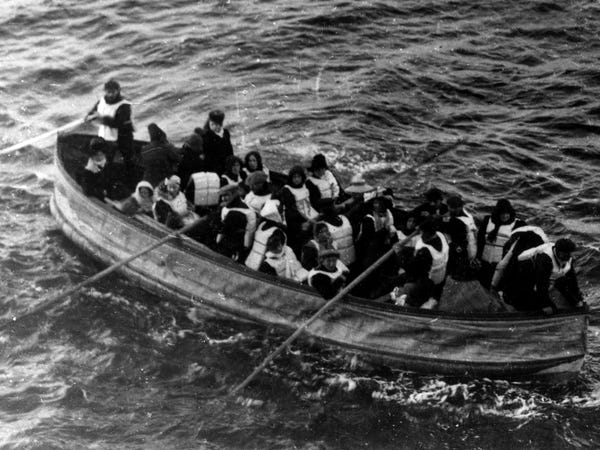 As the ship began to take on water, the lifeboats were launched with women and children only. There were only 20 lifeboats aboard the Titanic, which could carry up to 1,178 people — only half of the ship’s passengers and crew.

These boats were launched below capacity, for fear that the device lowering the boats would break if the boats were full. For instance, the first lifeboat to leave Titanic had the capacity for 65 people, but held only 25 when it launched.

After the ship sank, people in lifeboats returned to search for survivors. Instead, they found most people frozen to death in the icy waters.

The SS Californian was near the Titanic when it sank, but its radio was shut off for the night. 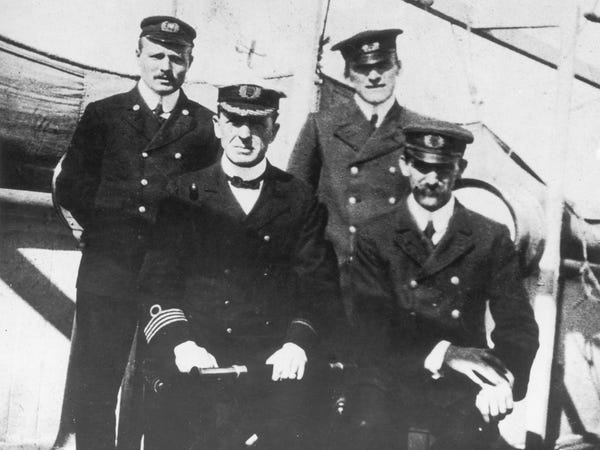 Additionally, when flares from the Titanic woke the captain, he assumed they were fireworks.

Instead, the RMS Carpathia responded to the Titanic's distress call and changed course to help. 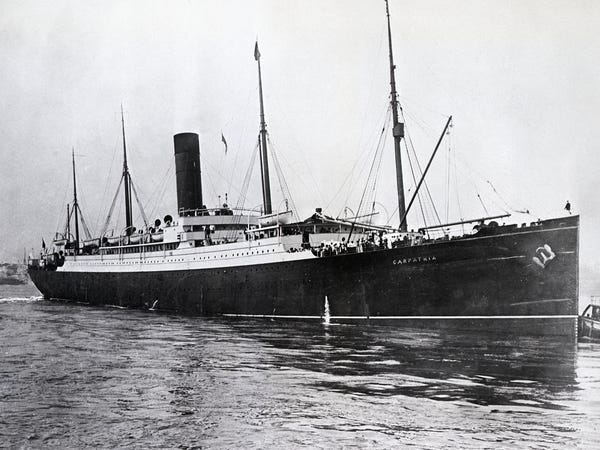 The Titanic’s distress call reached the Carpathia, a transatlantic passenger liner manned by Captain Arthur Rostron, at 12:20 a.m. — but it was more than 3 hours away.

Likewise, another ship, the Olympic, was too far away to help.

Arriving at 3:30 a.m., the Carpathia came to the rescue of the survivors in the lifeboats. 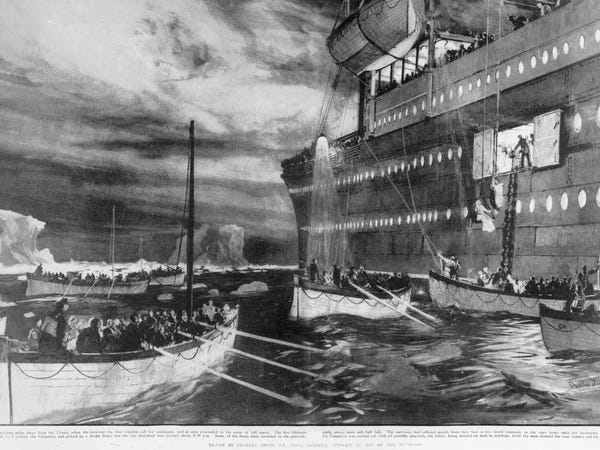 Lifeboat No. 2 was the first to reach and board the Carpathia. It would take several hours for the ship to pick up all of the survivors.

By 8:30 a.m., the final person from Titanic's lifeboats had boarded the Carpathia. 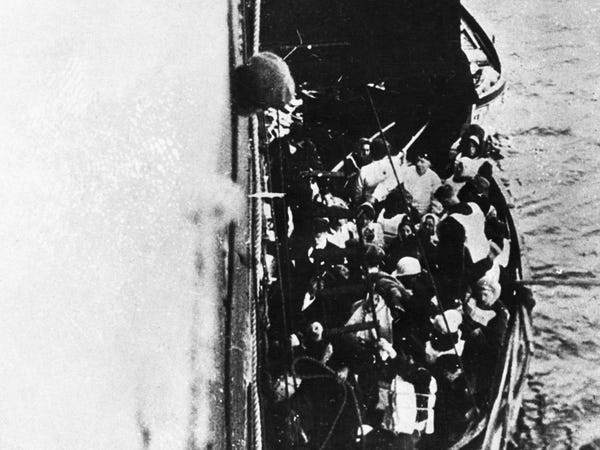 The ship was then ordered by the captain to search the wreckage and frigid waters for any other survivors, but none were found.

The passengers and crew of the Carpathia tried to accommodate the survivors once they were aboard, but for many, the life-changing experience had rendered them inconsolable. 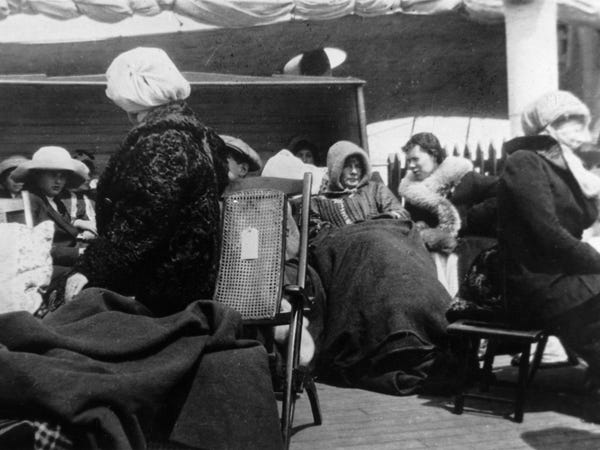 The Carpathia’s crew and fellow passengers gave their beds to survivors and offered them warm clothing and blankets, reported the Maritime Executive. Many of the survivors were upset and could do nothing but cry, or were shell-shocked by what they had experienced.

Rather than continuing along their original course, Carpathia's captain chose to return to New York City. 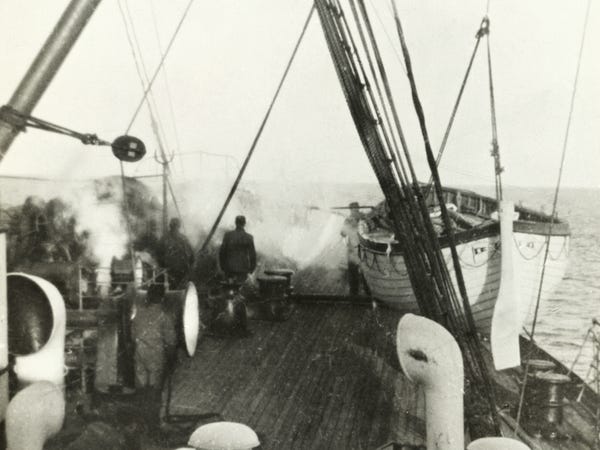 The closest destination was Halifax, but it required traveling through more ice. If Carpathia wanted to keep its original course, it could have gone to the Azores, islands off the coast of Portugal, but the ship didn’t have enough supplies to feed the increased number of passengers for such a trip.

The ship’s captain decided to head back to New York, which had been the Titanic’s original destination.

Rumors of the Titanic's sinking created a public frenzy at the White Star Line's office. 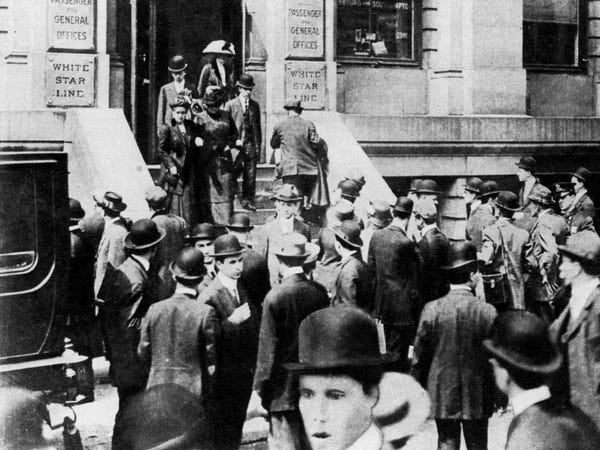 The White Star Line office in New York flooded with people wanting confirmation on the fate of the Titanic, but White Star initially refused to confirm if the ship had sunk, according to the New York Daily News.

Even as publications began to report on the sinking, White Star Line wouldn’t confirm the news to the public until almost two days after the ship went down.

As the Carpathia made its journey into New York, reporters hired tugboats to sail alongside the ship to talk to survivors. 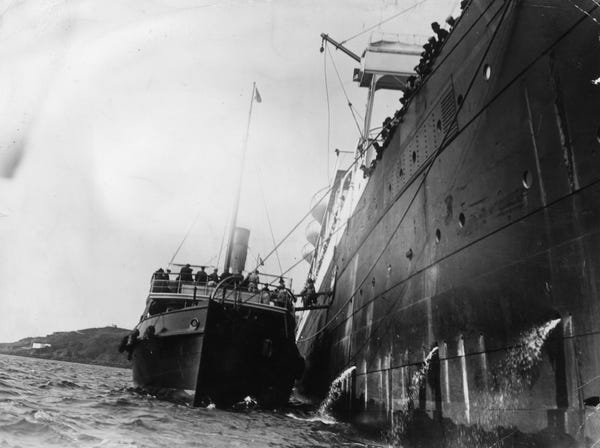 Rostron had ordered the crew to ignore the calls from the press regarding the Titanic, so to get the scoop, journalists shouted questions at the passengers and crew through megaphones from the tugboats. 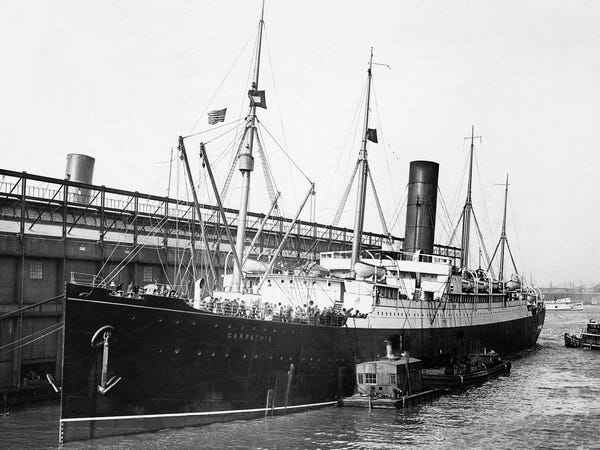 The ship had left from the same dock, only seven days earlier.

Around 30,000 people were waiting to welcome the survivors. 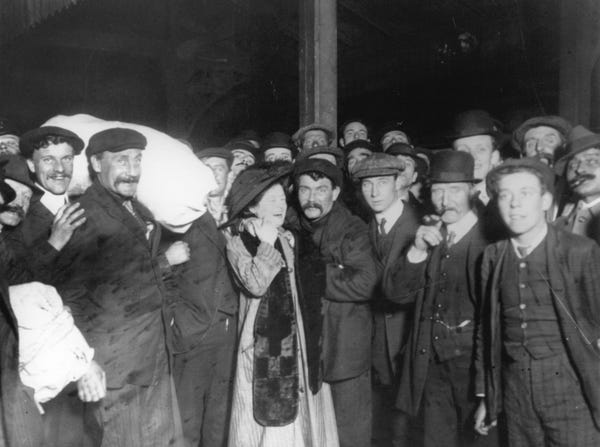 Families of passengers arrived hoping to be reunited with loved ones, according to the New York Daily News. Ambulances and hearses lined the streets waiting to tend to the survivors or cart away any of the dead.

As the survivors of the Titanic left the Carpathia, they were greeted by the thousands of people. 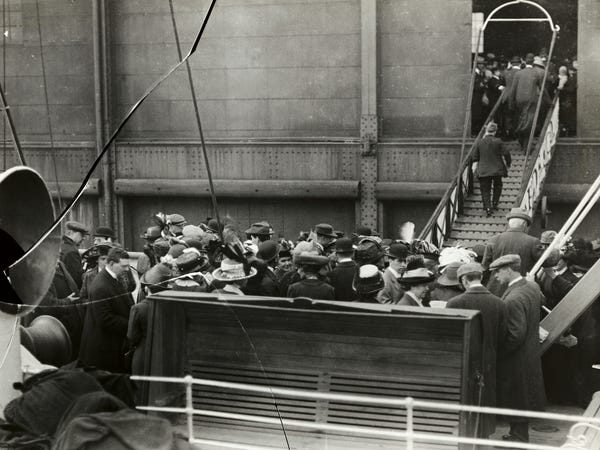 Families reunited with each other, while others learned their loved ones had perished.

Among the casualties, the crew and third-class passengers suffered the greatest losses with 700 and 536 fatalities, respectively. 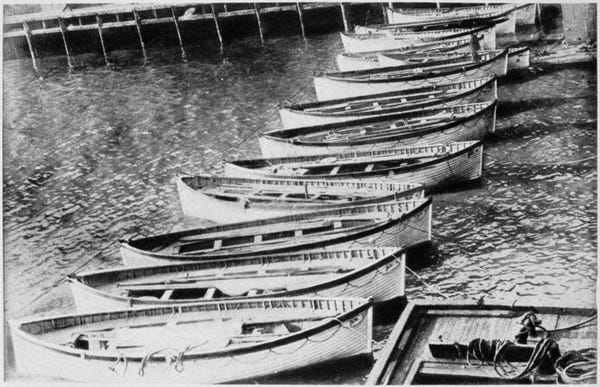 According to Titanic Universe, Carpathia did not have the space for all 20 and left seven lifeboats in the North Atlantic.

The 13 lifeboats they brought back were placed in the possession of the White Star Line.

For his rescue efforts, Rostron received a US Congressional Gold Medal. 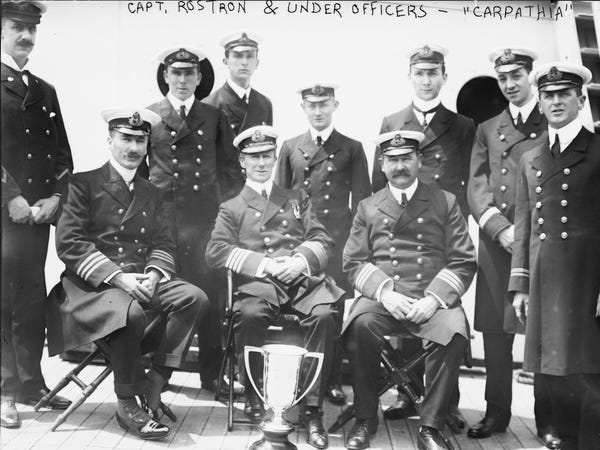 Rostron was reluctant to speak publicly about his role in the Titanic rescue, and avoided any spotlight for the rest of his life.