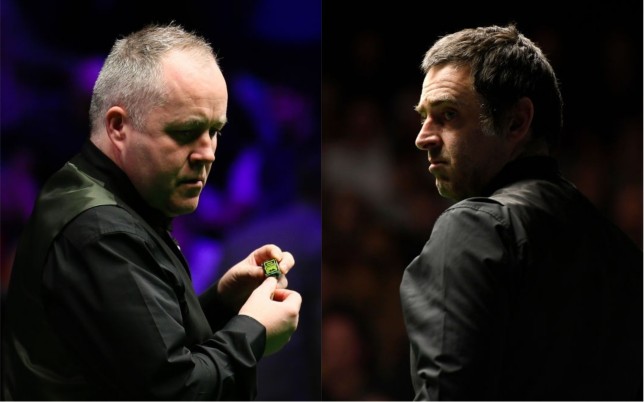 John Higgins is not expecting Ronnie O’Sullivan to retire any time soon, having heard the Rocket make retirement plans for the last 30 years, and instead expects his old rival to still be playing when he’s 60.

O’Sullivan set out his latest plan for retirement earlier this week, saying he expects to play three more World Championships and then head out on a global exhibition tour for his fans.

‘I’ve got a goal to keep me playing for at least another three World Championships,’ he said at the English Open.

‘Once I do finish playing I’ll probably do a two or three year swansong going round the world,’ he explained. ‘Just playing snooker for the fans as a testimonial, I’d enjoy that.’

O’Sullivan first voiced his thoughts on retirement at just 18 years old at the 1994 UK Championship, so when Higgins says he has been hearing it for a long time, he is not wrong.

The Wizard has heard it enough to question whether it will happen or not, in fact, he thinks Ronnie will still be at the table in 15 years and more.

‘Is he? Aye. Listen, it could happen, but no. I think O’Sullivan will be playing this game until he’s in his sixties, that’s just my personal opinion on it. I could be wrong but come back to me in 13 years and I think he’ll still be playing.’

Higgins, at 46 years old, feels he is a better player now than he has even been, and while he reckons he’s got a good few years left in his epic career, he has now plans to still be going at 60, when he thinks Ronnie will still be playing.

‘I don’t know about me,’ he said. ‘I’ll maybe be retired and enjoying the grandkids with the wife.

‘I’ve been sweating blood and tears for this career, I’ve been putting everything into it so I don’t think I’d have that longevity. But for somebody like O’Sullivan I think he could yeah.

‘I’m trying my best with things off the table but you get to the point of life where things can start to happen. Your eye sight can start to deteriorate, illness, who knows what’s going to happen?

‘Two or three years I’ll be 50 so you don’t know what’s going to be happening in your life. I’d dearly love to still be competing and still be out there. It’s still a great buzz when you’re out on the match table playing good stuff.’

After his 4-0 win over Oliver Lines on Tuesday, Higgins said he feels he is a better player now than at any point in his career, and O’Sullivan feels that is excellent news for the sport.

‘He’s lost all that weight, enjoying himself, what a wonderful place to be for John. It’s good, we’re lucky to have him. Feeling good, playing good, snooker’s had a result there.’

For more stories like this, check our sport page.