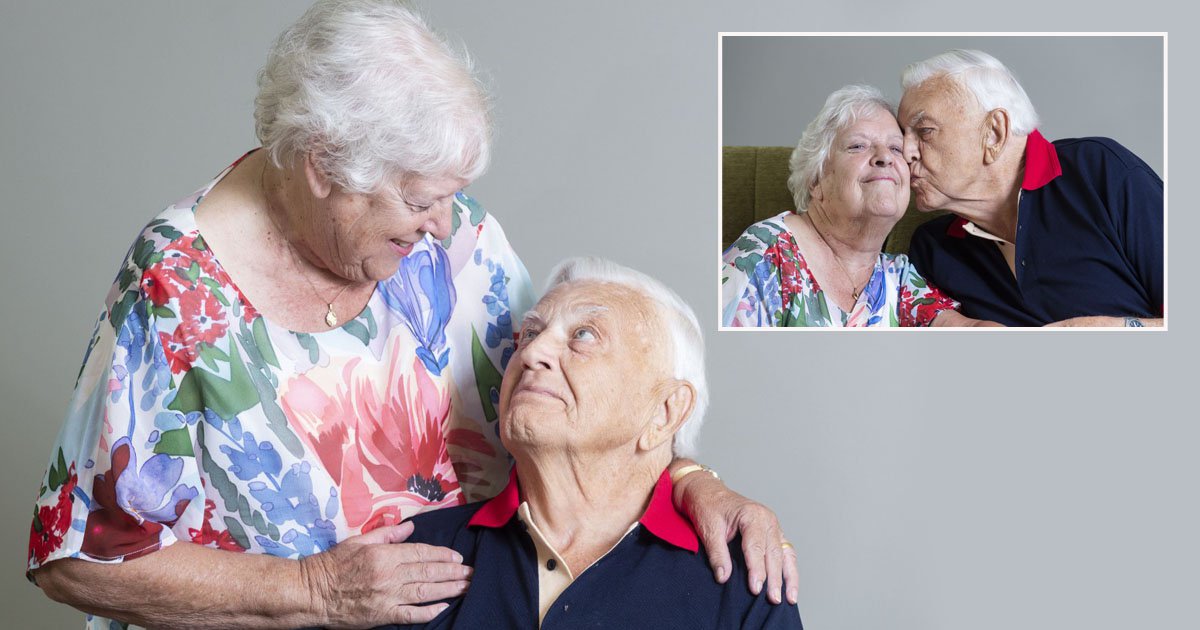 At 80 and 90 respectively, Olga Fleming and John Wood are both widowed thought they would ‘never find love again’.

They separately moved into Bupa’s Cottingley Hall care home in Bradford, West Yorks., and initially didn’t know each other well.

But during lockdown, they spent more time together and ended up falling in love.

‘It still feels like a bit of a dream how she makes me smile every time she walks into my room. My defences are completely down.’

Olga added: ‘It’s like a breath of fresh air, knowing you have a companion that is as madly in love with you as you are them. John has changed my life.

‘We are each other’s strength and enjoy spending every day together.’

John and Olga first locked eyes a few years ago but didn’t start getting especially close until a year ago, after being encouraged by staff who saw a spark.

Olga said: ‘When I first noticed John I could tell he was very polite, so I thought I’d like to talk to him and get to know him better.

‘I don’t know what I was expecting but falling in love again certain hadn’t crossed my mind.’

John added: ‘We had so much in common and it was nice to talk to someone on my level. I instantly noticed how intelligent Olga is, and she’s kept my attention ever since.’

Now, they love talking about their pasts, watching television and completing crosswords.

John said: ‘The best part is having someone there who understands you completely, no questions asked. I’m so lucky to have found that again.’

Olga added: ‘The most important thing was that we had the same view for the future. We’ve both reached the point where we want to relax and enjoy life.

‘We spend every day together, almost all of our time.’

Olga was born and raised in Bradford, where she worked as a hospital medical sectary for 28 years.

John is originally from Staffordshire but relocated to Bradford when he married his previous partner. He was the owner of two residential and nursing care homes.

Both of them were previously married but are now sadly both widowed.

Olga has three sons and four grandchildren, while John had two children: one son and a daughter, who was sadly stillborn. He has two grandsons and one great-granddaughter.

Lorraine Tinker, manager at Bupa’s Cottingley Hall, said: ‘It is heartwarming to see John and Olga so happy.

‘They cannot hide their smiles when they’re together – it’s infectious to be around and brings so much joy to us all.

‘There’s a misconception that care homes are about the end of people’s lives.

‘As John and Olga show though, we’re here to make sure it’s the beginning of an exciting new chapter.’