Fans were left in awe after hearing P!nk’s daughter, Willow, belt out in a powerful voice for the duo’s cover of ‘The Christmas Song’ during ‘The Disney Holiday Singalong.’

If you purchase an independently reviewed product or service through a link on our website, we may receive an affiliate commission.

Willow Sage Hart has not only inherited P!nk‘s punk rock flair, but her mom’s incredible vocals too! The nine-year-old teamed up with her famous mom for a singing duet during The Disney Holiday Singalong, which ABC aired on Nov. 30. When it was Willow’s turn to sing her lines in their cover of Nat King Cole‘s “The Christmas Song,” fans were left speechless — well, only for a minute. They quickly took to Twitter with their stunned reactions afterwards!

“When Willow sang, my kid looked at me & we both had tears in our eyes. WOW! Amazing!,” one fan gushed on Twitter, while another wrote, “Anyone else shook at pinks daughter willow and her voice! Omg amazing!” And then, a third viewer wrote, “I was not expecting Pink’s daughter Willow to have that much power in her voice,” adding clapping emojis. Indeed, Willow seemed to possess the vocal abilities of a singer twice her age! 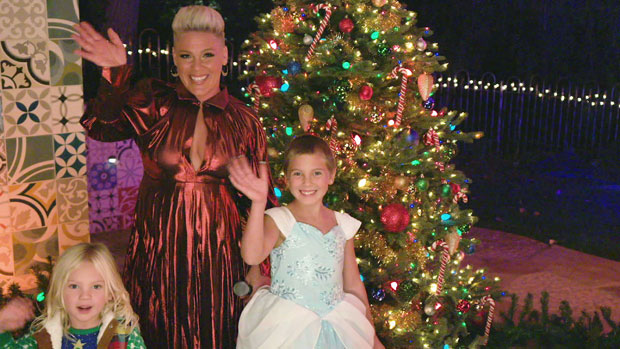 In honor of the Disney-themed performance, Willow transformed into a punk rock Cinderella with a buzzcut, a hairstyle that she had debuted in May. Meanwhile, P!nk also rocked her signature short and platinum hair while looking lovely in a metallic, rich brown gown.

It was a surprise to see Willow perform alongside P!nk, after the “So What” singer teased that she’d be appearing with a “special guest” on The Disney Holiday Singalong in a tweet shared a few hours before the broadcast. P!nk wasn’t the only celebrity to team up with her child for the television special!

Ciara‘s kids Future, 6, and Sienna, 3, held the spotlight as they opened a performance of “Rockin’ Around the Christmas Tree” by themselves, and were eventually joined by their superstar mom. More stars who performed during the singalong event were Katy Perry — who dressed up as a Christmas tree — Kerry Washington, BTS, Chloe x Halle, Adam Lambert, Leslie Odom Jr., Julianne Hough, Derek Hough, Andrea Bocelli and more!

If you missed the airing for The Disney Holiday Singalong, don’t fret. You can watch the entire special tomorrow (Dec. 1) through ABC on Demand or Hulu; the streaming platform, along with Disney+ and and ESPN+, is available for $12.99 a month!