Hoda Kotb reveals who her maid of honor will be

Food Network personality Ree Drummond opened up Monday about her daughter Alex’s wedding to Mauricio Scott, calling the evening both “meaningful” and “memorable.”

“It was even more special than any of us could have hoped for,” Drummond, 52, gushed on her website, “The Pioneer Woman.”

The nuptials, which took place Saturday at the family’s Oklahoma ranch, was a black-tie optional event that featured the mother of the bride in a dress by “Real Housewives” favorite Jovani. As for her 23-year-old daughter, Alex selected a lace Monique Lhuillier gown.

“The dress is simple, but the details are so feminine and beautiful,” Alex said. “Most importantly, it was comfortable enough to wear all night, and it twirls — which was great for the dance floor.”

The newlyweds opted to forgo a “first look,” with Scott seeing his blushing bride for the first time at the actual ceremony.

“When I thought about the wedding day, that’s what imagined: my dad getting to walk me down the aisle — especially considering his accident and everything that’s happened lately — and seeing Mauricio for the first time,” Alex said.

In March, Alex’s father and Drummond’s husband, Ladd, was injured in a head-on truck crash near the family’s ranch. Drummond’s nephew Caleb also sustained injuries in the scary incident.

Scott said the decision to wait made the moment “so much more special.”

“Yeah, it made it a little harder with pictures. But honestly, at the end of the day, it’s more about the meaning of the moment than the pictures,” he said.

Alex and Scott said their “I do’s” outdoors, with the couple writing each other intimate notes that served as “personal vows.”

The newlyweds then gathered with loved ones during cocktail hour before celebrating at the reception, which took place under an open white-sail tent. The garden-like ambiance also included tentpoles covered in lattice with floral centerpieces placed on each table.

As for the night’s menu, Drummond taste-tested the dishes that included a starter salad, steak and shrimp and sides of bacon mac and cheese, charred veggies, mashed potatoes and caramelized onions.

Guests were later treated to a six-tier cake crafted by the Oklahoma-based Amy Cakes that boasted edible lace in a nod to the bride’s attire. 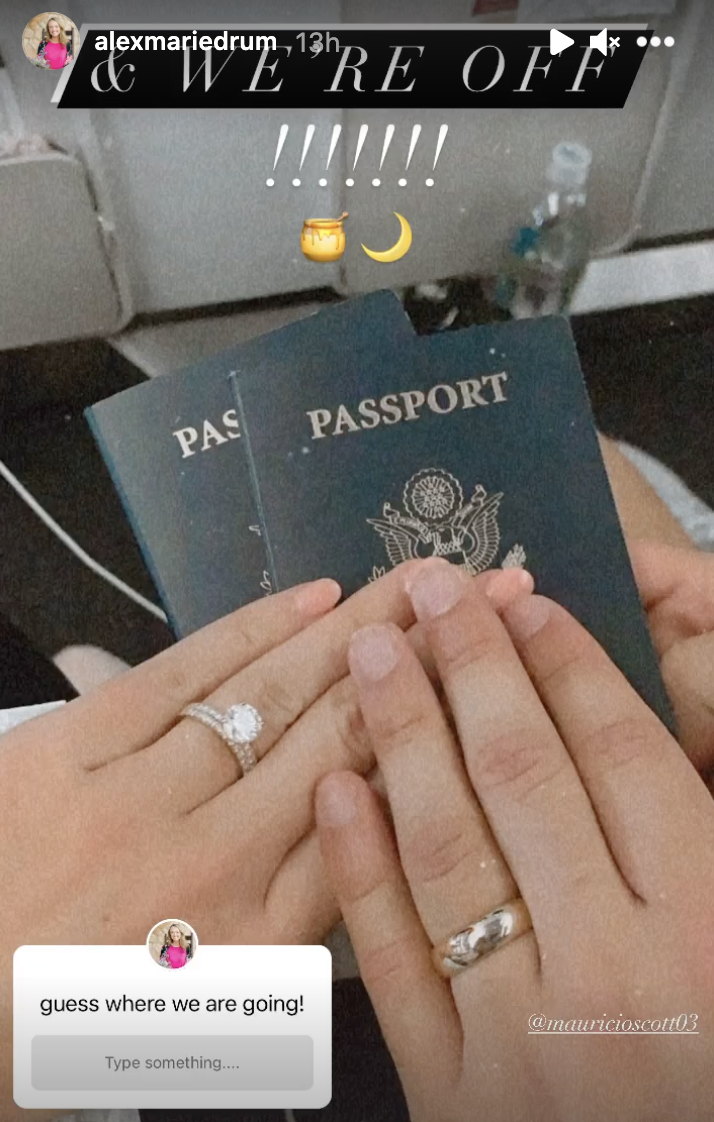 With a honeymoon in the Maldives up next, Alex and Scott are looking forward to their next chapter as huband and wife in Dallas.

“It’ll be really fun to come home to each other at the end of the day and get to cook together and share meals together,” Alex said.

The couple announced their engagement in August 2020. They met during their freshman year at Texas A&M University.