Prime Minister Scott Morrison says any changes to mandatory quarantine won’t begin until at least next year, dashing hopes for fully vaccinated Australians outside the country to potentially quarantine for a shorter period of time or at home instead of in a hotel.

The Prime Minister revealed the timeframe when asked if he had a plan for how Australia could live with the virus. 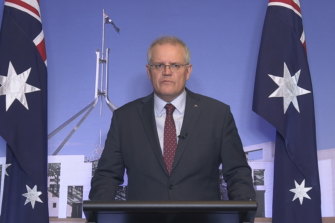 “Once we get into next year, I think we’re in a position where we’ll be able to be considering changes to how, potentially, quarantine arrangements work,” the PM told a virtual press conference from his official Canberra residence The Lodge, where he is quarantining following his trip to Britain.

“It was never going to be the case where Australia was closed one day and opened the next – that’s a completely naive position. Right now, the task is to ensure that we continue with the urgency of the vaccination rollout, and that provides the opportunities for different arrangements next year.”

Less than five per cent of the population is fully vaccinated, although the rate of first doses has increased substantially in light of the new outbreaks in Victoria, Sydney, Perth and the Northern Territory. There have been more than seven million doses administered to date.

However, Australia lags behind other countries and is last in the OECD when it comes to the proportion of the population that is fully vaccinated.

In a bid to speed up the rollout, the government has opened the vaccine program to under 40s and said that anyone who wants the AstraZeneca jab can have it, with 2.6 million doses available that have not been administered. Australian health officials have recommended it for those aged over 60 because of a small risk of blood clots. Britain provides the vaccine to anyone aged over 40.

The PM said changing quarantine requirements would “evolve in stages” and that the national cabinet would review the matter again when it meets on Friday, adding that skilled migrants and international students would start arriving in the country over the remaining six months of the year.

Australia’s international borders have been closed since March last year and the government says they are unlikely to reopen until the middle of next year, which will be after the federal election.

The new timeframe means the requirement to serve out two weeks quarantine in a hotel under police or military guard could extend for up to two years or possibly longer.

Liberal MP Jason Falinski urged the PM to reconsider given more Australians around the world were now fully vaccinated.

“I hope that as the data changes, which I am sure it will, that we can reconsider and allow a more streamlined approach especially for fully vaccinated returning Australians from countries that have the pandemic under control,” the Member for Mackellar said.

“Adoption of home quarantine for fully vaccinated returnees from low and moderate caseload countries would be extremely low-risk and provide an initial step towards more flexible and expanded quarantine models,” Mr Dore said.

The federal government has not asked the states to keep records of how many returning Australians who have been fully vaccinated test positive for COVID-19.

According to available data, the number of people testing positive for the virus in quarantine after being vaccinated is low.

Of the 6447 travellers who went through Victoria’s quarantine system between April 8 and June 3, only four tested positive after reporting having at least one dose of vaccine, just two had been given two doses, and none required hospitalisation. In NSW, 11 people (2 per cent) of the 449 COVID cases recorded in hotel quarantine were among people who said they’d been fully vaccinated.

A spokeswoman for Queensland said the state does not keep records as there was “no requirement” set by the federal government to collect and store information on the vaccination status of international travellers. SA, WA, the NT and the ACT did not respond to requests for their data.