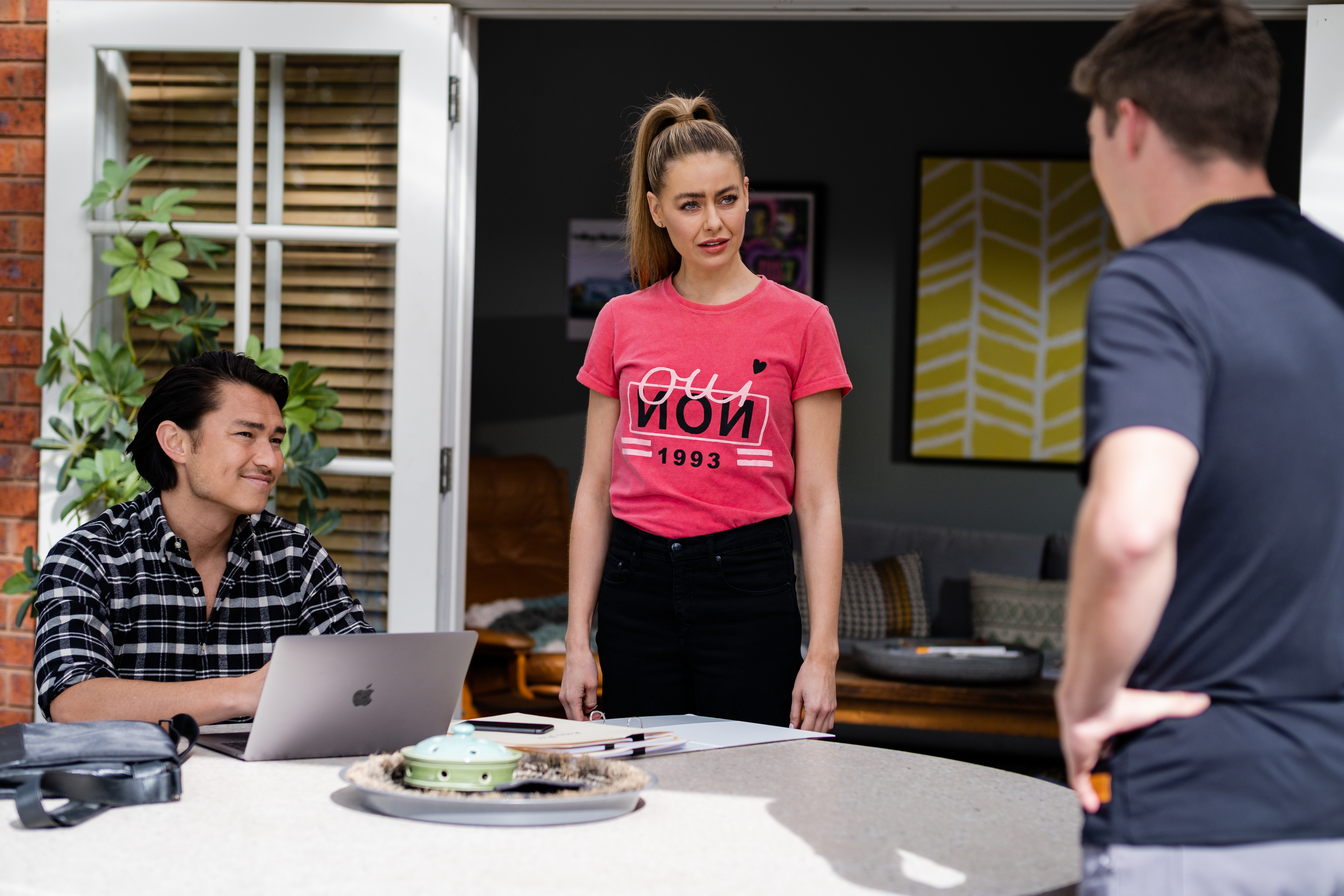 Leo (Tim Kano) is playing a dangerous game in trying to split Nicolette (Charlotte Chimes) and Chloe up, but he now has Chloe (April Rose Pengilly) exactly where he wants her in Neighbours. His original plan was to simply come between the two of them for his brother’s benefit, but now it seems he just wants Chloe all to himself.

And with Chloe’s history of cheating, could she be about to give in?

Hendrix (Benny Turland) got too close to uncovering his dirty plan, so Leo put the wheels in motion to remove his risk – by firing the poor lad and thus protecting his plan a little longer.

Hendrix is rattled at losing his job and tries to tell Chloe the truth; that he was fired because he became wise to Leo’s ulterior motives with her. Sadly, Chloe is too close to the situation to see it and instead of walking away, Hendrix’s claims push her closer to Leo. This plays right into his hands and Leo goes for the jugular, calling out Chloe’s relationship woes. His concern is breaking down Chloe’s resolve and there are palpable sparks between them.

The baby shower rolls around and Aaron (Matt Wilson), David (Takaya Honda), and Nicolette can’t wait. Their parenthood is impending, and they are beside themselves with excitement. But they’re missing two of the party’s VIPs – Chloe and Leo. What could they be up to that would make them miss such an important event? It seems like they might be celebrating the occasion with a horizontal dance. The rumour mill goes into overdrive and Mackenzie (Georgie Stone) feels compelled to step forwards, letting slip exactly what Hendrix has been suspecting. How will the family react?

Chloe and Leo eventually rock up in true fashionably late style, and while Nicolette is oblivious, Aaron and David are livid, certain that Mackenzie’s accusations hold water. Aaron goes into concerned brother mode and corners Chloe, demanding to know what’s going on, and under the pressure she confesses – she’s not happy in her relationship. Aaron and David are rocked by her revelation. If she splits with Nic, where will that leave them?

And just go get the guilt juices flowing further, Nic stands up during the baby shower to give a heartfelt speech to her loved ones for all their support, including her incredibly attentive and loving girlfriend. Erm, is anyone going to tell her?

Probably not Chloe, who is now feeling even more conflicted about how she feels. Does she stick the relationship out?

Later, David catches Leo gazing at Chloe and the penny drops, Hendrix is right. Fearing for the stability of his new family, David threatens Leo – leave Chloe alone or he has no brother.