Even under the most ambitious emission reduction scenarios, the world is now likely to heat to 1.5 degrees or more above pre-industrial levels by 2040, exposing it to the sort of extreme weather now ravaging Europe and North America, the most comprehensive analysis yet undertaken of climate change shows.

The latest report by the United Nations Intergovernmental Panel on Climate Change (IPCC) will be central to climate negotiations to be held in Glasgow in November, and confirms the planet is warming in step with rising greenhouse gas pollution. 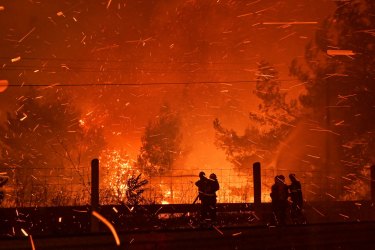 Greek firefighters battle monster fires this week that the government has blamed, in part, on climate change.Credit:Getty Images

“The urgency is coming through exceptionally strongly in this report, much more so than the previous reports,” said Will Steffen, a contributing author on the five previous IPCC assessment reports. Professor Steffen said unless the world slashes climate emissions by 50 per cent by 2030, it faces an “impossible situation”.

For Australia, the projections are sobering for a nation that has already warmed 1.4 degrees since 1910, a pace in line with the global average for land.

“Heat extremes have increased, cold extremes have decreased and these trends are projected to continue,” a summary for Australasia states. “The frequency of extreme fire-weather days has increased and the fire season has become longer since 1950 at many locations,” it adds, saying there was “medium confidence” in such findings.

Roshanka Ranasinghe was one of just two Australians who worked as co-ordinating lead authors on the report, helped identify 33 so-called climate impact drivers (CID) and personally handled the Australasian assessment. He said that 26 of the highlighted effects were broadly relevant for Australia.

“Of these 26, we have high confidence that 11 CIDs will change in all four Australian regions by mid-century under all [emissions] scenarios but the lowest ones,” Professor Ranasinghe, chair in climate change impacts and coastal risk at IHE Delft/University of Twente, told the Sydney Morning Herald and The Age. “This is consistent with the global warming level of about 2 degrees, relative to 1850-1900.”

These top 11 ranged from rising temperatures, extreme heat, ocean acidification and sea-level rise, which get worse, while cold spells and frosts will decrease. “We also have high confidence that snow will decrease by mid-century,” he said.

“We are not just tracking whether temperatures are increasing, for example, but projecting when changes might reach critical tolerance thresholds for people, agriculture or wildlife,” Professor Ranasinghe said.

Worsening bushfire weather, worsening marine heatwaves that spell danger for our coral reefs, and lower winter rainfall for southern Australia are among the challenges to come.

The broader report presents a picture of the current state of the world’s climate and lays out five potential scenarios for future emissions pathways, ranging from low to high pollution trajectories. More detail will be coming in the next two IPCC instalments, particularly the third one on mitigation, due out next year.

However, regardless of what action the world takes now, warming over the coming decades is locked in due to the amount of greenhouse gas emissions already in the atmosphere and the lagging effect they have on the climate, said one of the report’s lead authors, CSIRO’s Pep Canadell.

But if the world immediately makes drastic cuts to emissions, and reaches net zero or carbon neutrality before 2050, the world can still stabilise the climate and see it slowly start to cool by the end of the century.

That achievement would require curbing emissions to about 500 billion tonnes in total, or about 12 years of current pollution levels, and even then there were only be a fifty-fifty chance of limiting warming to 1.5 degrees compared with pre-industrial times.

“It is not too late,” said Dr Canadell. “We are still in the control cabin of the planet and the climate system in determining the long-term future of climate.”

He said climate change was already part of the personal experience of humans enduring a wave of floods, heatwaves and fires as seen recently in China, Canada, Greece and in Australia in the past two months.

“Every decimal of a degree [of warming] that we are avoiding is a win for us and a win for the climate,” he said.

However, the report says many of the impacts of climate change, particularly changes in ocean warming and acidification, sea levels and ice sheets, are locked in for hundreds if not thousands of years unless massive extractions of atmospheric CO2 take place.

As well as likely scenarios, the report details climate changes that have a relatively low likelihood of occurring but could have potentially devastating impacts, such as the sudden disintegration of ice sheets or mass forest die back, which it says cannot be ruled out from happening this century.

Formally titled Climate Change 2021: the Physical Science Basis the report is the work of 234 scientists, is overseen by195 governments and involves reviews of 14,000 scientific papers. The final wording of the 40-page summary for policymakers was agreed in lengthy meetings in recent weeks that worked through the document word by word.

Since the first IPCC assessment report was completed in 1990, humans have emitted one trillion tonnes of carbon dioxide through burning fossil fuels or land clearing. That total is about 41 per cent of all that emitted since the industrial revolution in just three decades.

The report has a greater focus than previous assessments on non-carbon dioxide greenhouse gasses, such as methane, which it identifies as a significant contributor to warming.

This could lead to increased pressure on Australia due to the government’s support of a gas-led recovery and significant agricultural methane emissions.

For its part, the Australian federal government said climate change demanded a co-ordinated global response and its policies were designed to reach net-zero emissions as soon as possible by driving down the cost of low-emissions technology, such as hydrogen to replace fossil fuels.

“The government is seeking to achieve net-zero emissions as soon as possible,” Prime Minister Scott Morrison said in Parliament on Monday. “We’re seeking to do that by using technologies, not taxes.”

Energy and Emissions Reduction Minister Angus Taylor said the IPCC report highlighted the physical impacts of global warming and “overcoming these challenges is a shared responsibility”.

“Our technology-led approach to reducing emissions will see Australia continue to play its part in the global effort to combat climate change without compromising our economy or jobs,” Mr Taylor said.

Labor climate change and energy spokesman Chris Bowen argued the IPCC projections provided “yet more evidence of the costs of inaction” and said the “bare minimum” response from the federal government must be to set a deadline to reach net zero emissions”.

Greens leader Adam Bandt said in light of the report a failure to lift Australia’s current goal of cutting greenhouse gas emissions to between 26 per cent and 28 per cent of 2005 levels would be “criminal negligence.”

The Greens are calling for net-zero emission to be reached in 2035, or ahead of the government’s “preference” to reach that point in 2050, and for a 75 per cent reduction by 2035.

Get a note direct from our foreign correspondents on what’s making headlines around the world. Sign up for the weekly What in the World newsletter here.

Most Viewed in Environment