“The clicks start. The curtain comes up. You see these four strong women on stage, and they just belt their tits off, pretty much. ”

Ruva Ngwenya is very excited about being cast as showgirl La Chocolat in the Moulin Rouge musical that opens in Melbourne later this year. She gets to open the show with its biggest banger, Lady Marmalade.

“It’s just the highlight of the show in my opinion,” she says, laughing. “In my mind it’s all about that power and strength within your femininity and I’m really, really into that and passionate about exploring my femininity… Because it’s cool and it seems to be what everyone’s doing in 2021. I like that feminine essence about myself. And this song is all about that, and this show is about that, really.” 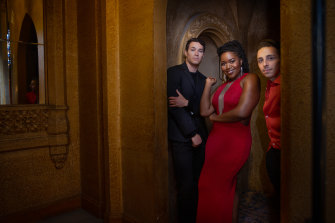 A talented and diverse cast has been announced for the musical based on Baz Luhrmann’s hit 2001 film, due to open at the Regent Theatre in August. Des Flanagan plays the show’s hero Christian (Ewan McGregor’s role in the film) and Alinta Chidzey plays Satine (Nicole Kidman).

When rehearsals start in June it might be the only working production of the multi-Tony-nominated show in the world: the Broadway original is still on pandemic hiatus after 25 company members caught COVID-19, two were hospitalised and the entire industry shut down. And the West End production is slated for the northern autumn (the original Moulin Rouge dance hall in Paris, too, is still closed, though the sails on the famous windmill still turn).

They’re already in costume fittings. Christopher Scalzo, who plays the drag character Babydoll and is another of the “Lady M’s” in the opening number, is loving it.

“The costumes are magnificent,” he says, taking me through a “very revealing set of corsets”, three or four pairs of stockings, beautiful shoes, a magnificent wig, a very elaborate headdress and “the rest is a surprise”. There is a reveal he doesn’t want to spoil.

It’s his second time in drag in a professional sense, after playing Angel in Rent. He feels drag is having a “thrilling” moment in popular culture.

“The art form and the diversity of the artform, from the serious elements through to the comedic, almost pantomime element, it makes it a watchable, enjoyable piece of entertainment. Kids are enjoying drag as much as adults find it moving and empowering.”

He remembers first seeing the film Moulin Rouge at the Rivoli in Camberwell, “a very young teenage me and my best friend, and she and I, our jaws were on the floor”.

He loved the contemporary style and the “Bohemian aspect, a diverse company of people finding a community and a safety in a place where they were exactly themselves. Celebrated, safe, happy, and finding that sense of identity.